News
You are here: Home1 / News2 / Development3 / Friends for life at the 2020 White Water of Siberia Forum

“Friends for life” is how the group who attended the cultural and sport rafting forum of White Water of Siberia 2020, described the experience. And with that, the fifth year of the forum came to an end. The annual forum takes place in Altay and is organised by Федерация Рафтинга России / Russian Rafting Federation.

Over two weeks, 50 participants from six countries passed together through extreme rapids on the rivers, rescuing team members from the water, conquering mountain passes, singing campfire songs by guitar, steam bathing and swimming in the cold river waters of the Altai mountains.

Like most events this year, the coronavirus pandemic affected participation levels. This year, participants came from only six countries  (Kazakhstan, Ukraine, Abkhazia, Belarus, Latvia, Turkey). On the other hand in the Kazakh group, there were 33 participants!

Bonus to the official program was easy rafting on the Katun river, where participants played pirates, dived into the river, and practiced paddling skills and rescue techniques, in case the raft flipped in whitewater rapids.

The epic conclusion of the forum was four hours rafting down the Katun River through rapids Ilgumen, Shabash, and Vtoraya Stupen. In the rapid Shabash, two rafts turned upside down, but all the team members managed to get to the rafts and catamaran of rescuers. Adrenalin was pumping, it was really a lifetime experience.

On the way through Altay wild dense forest, participants and guides touched the land of sandy river beaches, which look like a compact world. Everyone made a wish to come here again with tents and stay overnight along the river. 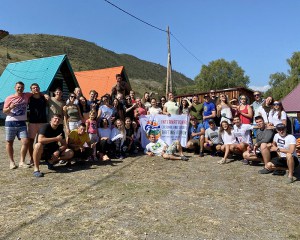 At the end of the rafting all eight rafts, two catamarans, and one kayak stood in the line, sang together, and made a contest: who will touch the land first.

Later there was a steam bathing, big campfire, buffet dinner, gifts giving, disco party, signing the flag of the forum, and contacts exchanged.

All farewelled like friends for life, formed friendship and networking.

Most of the guests promised to come back to Altay next year: as a participant and a tourist. No one wanted to leave for their hometown, because the time at the forum was one of the best life experiences. It’s not an exaggeration it’s a sincere confession of everyone at the closing ceremony.

Unbelievable great Altay mountains, ancient petroglyphs, nomadic history, legends, conquering mountains, and overcoming fears plus great networking – at the forum there were all of these and even further!