News
You are here: Home1 / News2 / Guide / Safety3 / Rafting dictionary – know your boof from your bootie

Communication is key to ensure a rafting trip is safe, fun and memorable for all the right reasons. We’ve pulled together this short Rafting Dictionary with some of the more common terms you’ll hear on a rafting trip.

This article is not written to replace a Safety Talk or indeed raft guide training but can be used as a quick reference or even for a first-time rafter wanting to understand the “lingo”. Links contained within are to various other articles and reference sources on our site.

Rafting Dictionary: a beginners guide to what comes out of a raft guide’s mouth 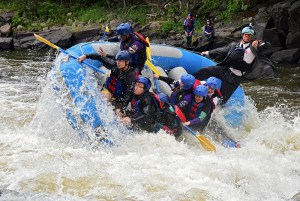 Bar: a geologic formation along a riverbank typically made from sand or gravel

Belay: exerting tension on a rope which means a single person can hold a rope even under great weight or pull

Blade: the part of a paddle that is wide and flat (the end that goes in the water)

Boil: the effect of water pouring over/around a deep rock or underwater constriction. On the surface, it looks like large bubbles in boiling water

Boof: in rafting this is either a raft being “boofed” off a rock (bumped) or a river feature is “boofed” where the nose of the raft is lightened and a strong paddle stroke is used just before going over the feature – the resulting sound is a boof as the raft slaps down on the water after. [Editor’s note: do not google this word on a work computer – it also has definitions not associated with rafting 🤣]

Booties: Boots made from neoprene and worn for warmth and to protect the soles of your feet from sharp rocks

Bow: the front of the raft

Breaking Wave: the white frothy bit at the top of a wave – in a standing wave (see below) it crashes down on itself due to the nature of the river

Capsize: in rafting terminology this is referred to as a flip – the entire raft is flipped upside down

Carabiner: an essential piece of kit for a raft guide. Either an oval or “D”-shaped metal clip used for attaching equipment in/on/to rafts and also in emergency situations requiring rescue skills and ropework

Cartwheeling: Cartwheeling is a vertical move made by a raft in a hole where the bow & stern rotate through the air with the raft on a vertical axis

CFS / CMS: acronym for the flow of water (cubic feet per second / cubic metres per second).  Knowing the flow of a river tells you how big or small the volume is. Definitely worthwhile checking if it is CFS or CMS – it can make a big difference!

Chute: a section where the river gradient is steeper and flows faster. Quite often is narrow and between rocks or other obstacles

Classification: the rating of a series of rapids or the river as a whole. The classification describes the difficulty of rafting. The International Scale is from I-VI with I as the easiest and VI considered “runnable with serious risk to life and limb”

Confluence: the area of water where two or more rivers meet

Current: the rate of movement in water – can be described by speed and direction

D-ring: metal loops sewn into the outer side of a raft- usually used for safety lines, attaching oar rigs or equipment, and to be attachment points in rescues

Dig In: term used by a guide meaning to bury the paddle deep in the current for a stronger stroke

Downstream: direction the water in a river flows (due to gravity)

Dry Bag: a bag which keeps water out and if closed correctly, keeps the contents within dry

Duckie / Hot dog / Croc: an inflatable kayak that seats one or two people

Dump truck: when a raft is lifted up on one side and dumps everyone out, but then rights itself without flipping over

Eddy: an area in moving water where the flow is opposite to the normal flow – in French the literal translation is “contra flow”. Eddies are caused by obstructions to the normal flow (rocks, river bends, trees, human interference like concrete or bridge stanchions etc)

Eddy Fence / Eddy Line: the area where the Eddy meets the regular current and creates a swirling of water and waves

Egress: a designated place to exit the river (to land, road etc)

Falls: Short for waterfall; a drop in a river with vertical properties

Ferry: the act of moving a raft laterally across a flow. An “upstream ferry” is used to cross a river while losing as little downstream distance as possible

Flip: when a raft turns upside down – see also “capsize”

Flotilla: when two or more rafts are used for a trip

Get Down: a loud and clear command from the raft guide to get into the safest position (the safety talk will cover what this position is – it can vary slightly dependent on the river conditions). The get down command also changes the shape of the bottom of the raft to allow the raft to punch through bigger waves

Ghost Boat: at difficult rapids guides will sometimes send an empty raft down without anyone in it

Gradient: the measurement of the vertical drop in a river/section

Guide: the person leading the raft

Haystack: a wave that is caused by fast water running into slower current

Hold On: an instruction from the guide to hold onto the safety line and await further instruction

Hole / hydraulic: where water drops over a rock and curls back on itself creating aerated, frothy water. They vary in retentiveness meaning some can be used for surfing/playing whilst others must be avoided at all cost

Hypothermia: a medical emergency that occurs when the core body loses heat faster than it can produce heat, causing a dangerously low body temperature

Lateral: a large wave or hole at a strong angle relative to the main downstream current

Lead Boat: The first boat in a flotilla

Ledge: an obstruction usually formed of very hard, non-erosive rock that spans part or all of a river acting as a natural dam

Life Jacket: not the same as a personal floatation device (PFD). Life jackets are given to non-swimmers as it will float the swimmer on their back only. A PFD is for people that can swim

Line: the route through a rapid to avoid obstructions and obstacles

Nailed It: When someone does something really well e.g. “You nailed the move on that drop”

Oar: not a paddle! Made of a long shaft and wider blade at the end, used in tandem on rafts 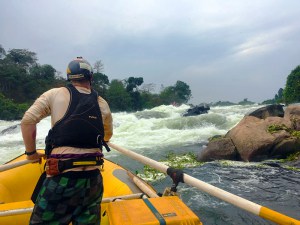 Oar Raft: a raft controlled by a person who sits on an oar rig

Oar Rig: a rowing frame with attachments for oars and is lashed on typically through D-rings. The oar rig is usually mounted centre or stern of the raft

Paddle: shorter than an oar and held by hand (not attached). Raft paddles are similar to canoe paddles with one blade. Kayak paddles have blades at each end of the shaft

Paddle Boat / Raft: A raft crew consisting of people with paddles and a guide

Pool Drop: section of a river where rapids are separated by pools

Portage: the act of carrying all gear (raft included usually) around a rapid or section

Rapid: a hydrological feature of a river which is identified usually by steepness, increase of speed and increase in obstructions (boulders / rocks) or a combination of any/all

River Rating: A measure of the difficulty of a rapid or river. See also classification

Rooster Tail:  where currents meet to create a standing triangle of water in motion

Round the Bend: a term used when a guide isn’t actually too sure when you’ll arrive at a particular rapid or camp. For example: “How far til the lunch spot?”, “Should be just round the bend”

Run: A general term for a part of the river that can be “run” or rafted on. Can also be referred to as Section

Safety Boat: in a flotilla, this is the boat that is downstream of other boats to provide a safety net if anyone swims

Safety Talk: the talk before heading out on a trip that covers The talk given prior to starting a trip on a river that covers the techniques and things you need to know to help yourself should something go amiss

Scout: exiting the raft onto land to inspect a rapid or section

Section: a part of a river which lies between two points

Signals: a series of hand and body signals to relay messages on the river (think semaphore but with bodies)

Sleeper: a hard to see rock that sits just under the water surface

Sneak: take an easier line through a rapid sometimes called a “chicken shoot”

Staircase: a series of drops/ledges that if the water was not there, would resemble a staircase

Standing Wave: a type of wave created by various reasons like constrictions in the river. Visually, it appears that the wave is standing still

Stern: the back of a raft

Swimmer: if you’re in the water, you are a swimmer

Take Out: where the river trip ends – also known as an egress point

Technical: rapids with many rocks or other obstacles are considered “technical” if they require a certain amount of skill to manoeuvre compared to a “non-technical” run

Throw bag: a bag filled with floating rope thrown to a swimmer in a rescue

Trip leader: a god-like creature who shoulders the responsibility of making the magic happen

Undercut: formed where the current flows under a rock, overhang or ledge. Mostly found on rivers with softer rock (limestone, sandstone). These are best avoided

Upstream: the opposite direction of the main flow / current

Whitewater: the white foamy aerated water at the top of the water surface in river features

Wrap: when a raft is trapped against a rock or other obstruction and held in place by the current

If you’re interested in becoming a Raft Guide, our section dedicated to Raft Guiding contains all the information you need to know about certification, safety, and the courses running local to you. 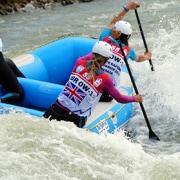 Busy second half of the year for the IRF