You are here: Home1 / About2 / Committees and Commissions3 / Recreational Rafting Committee

The remit of the Recreational Rafting Committee is promoting rafting as a leisure or adventure activity.

The Recreational Rafting Committee shall be responsible for: 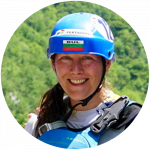 Emilia Begunova is a person with a lot of experience and good vision for the rafting development.

Her education is Master of International Tourism. In 2001 she founded a company for rafting and adventure tours which is now a leading company. She has long years of experience as a rafting guide and a competitor, being a captain and trainer of rafting teams, as well.

Emilia became a judge in 2009 and since then taking part in almost every significant race on international level.

In 2009 she established the Bulgarian Rafting Federation and stood for its rights to being an independent and nationally recognized organization, organizing training courses, competitions and other events in Bulgaria, strongly standing behind the idea of developing the rafting culture in Bulgaria and nearby countries.

Emilia has been on the BOD since 2013. During this time she led a survey examining which rivers people felt were under threat and which rivers have seen an improvement over the years. More recently she has been working with Kianoosh on the project of getting more Eco-rafting Festivals to be held, where rafting as well as river conservation are introduced to locals and anyone else related to the river industry are brought in as well, such as equipment manufacturers and tour operators 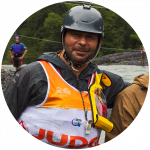 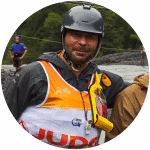 Kianoosh has an MA degree in Geography and Tourism Planning and has been planning and managing projects in the field of River Ecotourism and Eco-Rafting in Iran ever since. He has arranged rafting festivals and competitions as well as judge and guide training workshops.

He has been an IRF certified Raft Guide and Trip Leader  as well as IRF Race Judge since 2009, and has recently become certified as a Chief Judge.

He has explored numerous new rivers in Iran, such as the Karoun, Karkheh, Dez, Ghezel Ozan and Haraz Upper parts. He has managed a few river expeditions in Himalayas in India, Nepal, etc.

Kianoosh’s passion is Ecotourism and has 19 years of experience including River Expeditions, Wildlife Tours, Birdwatching Tours, Desert Safari, Jungle Safari, Climbing etc, and, since 1998, he is the Tour Manager and Managing Director of Ecotour Iran, the first Iranian Ecotourism Centre. He is also manager of Marcopolo Ecotourism Centre (Marco-Eco) the leading Iranian Travel Group & Holding since 2016. He does work cooperating with the UN in some projects; conservation of the cheetah in Iran, Ozone layer projects etc.

He has been on the IRF BOD since 2015; Founder and Head of Iran Rafting Association since 2011; Executive Manager of the Rafting Committee in the Iran Canoe Federation since 2015

Research and projects he has been, or is still, involved in include his MA Thesis on River Ecotourism in Iran which was selected as the national plan by Iran National Tourism Organization; plus various River Ecotourism Projects in a number of different provinces around Iran; and teaching “Ecotourism” and related subjects to ecotourism since 2003.

He has been working on expanding these projects world-wide, which is a slow process, but is gaining traction. He, together with Emilia, worked to get a Eco-Rafting Festival happening at the 2017 ERC and WRC, however, the plans need to be included by the organisers much earlier. He feels being Chair of Sustainability is the ideal place to continue to do this. 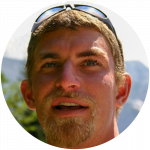 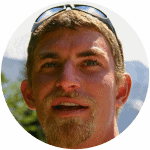 Gáspár was a flatwater kayaker in his youth, and was to become a pro athlete when he realised there is more fun on whitewater than on flatwater, so he swapped to whitewater kayaking and rafting instead.

After many years spent with kayak and raft-guiding, Gáspár went on educating himself further and soon became involved in organising raft guide training programs on four continents. By this stage, Gáspár had become an IRF Assessor, responsible for the International Rafting Federation’s Guide Training & Education Scheme, organising IRF Instructor Workshops on various rivers around the globe. He has awarded IRF Instructor certifications in over 30 countries.

Being a Rescue 3 Instructor he delivers Rescue 3 Whitewater and Swiftwater Rescue Technician Courses in Eastern Europe and some exotic countries.

After paddling 200 rivers, he has a good understanding of rivers and different rafting cultures around the world.

Gáspár is the founder of the one-of-its-kind and truly unique Whitewater Rescue Challenge held annually in the Austrian Alps. Gáspár is also proud to produce state of the art WWTC throwbags and raft thwart bags, specially designed for whitewater and rescue use. A lot of research and testing had led to great products with specific features that are preferred by professionals worldwide. He has been the key driving force behind the very successful Guide Training & Education sector of the IRF since he stepped up into the position in 2009.

He also organises the GTE Conference which is now an annual event which brings Instructors together to get updated and for them to share their general knowledge and gain an increase in experience so as to raise the level of instruction and knowledge of river safety world-wide.

Besides being an IRF GTE Assessor he is also an IRF Chief Judge. 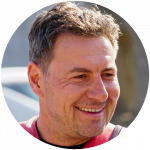 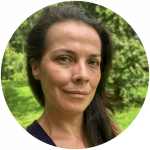 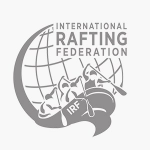