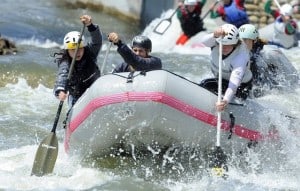 This is another young team that started its career at the R4 Euro Champs – Čunovo, 2014. We talked to Monika Kebiskova to get an introduction to this team.

“Our team is called “Vopičky”, which means ‘ monkeys’, because we are small, bouncy and quite loud. The team was founded in 2012, and we mostly competed in Slovak and Czech races during the last 2 years, making the European Championships our biggest challenge so far. We are the second best team in the women’s category in Slovakia (but rather don’t even check how many women teams compete in this country :D), hoping to gain more international recognition after this season. Apart from rafting, we all have a history of competing in flat water kayaking and we are also currently training for European Championships in dragon boats. Each of us is studying at a university and has a part-time job because we need to sponsor all our sport activities :D”

These girls have interesting profiles! 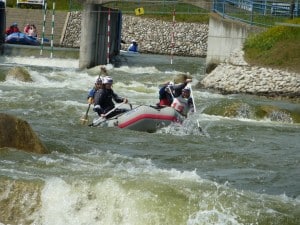 “The captain is Monika Kebísková, the front right paddler. She joined Facebook in October 2008, on her page it says in a relationship, for now no addiction to any type of FB game found. Apart from rafting, she enjoys kayaking, dragon boats and children between the ages of 7 and 12 years (that she coaches in a camp during the summer).

Anka Paučová, front left position, her Facebook addiction started in November 2008, her status says in a relationship and she is a big player of online FB games (in many of them, she is first in the whole friend list). She enjoys rafting so much she sometimes prefers to sleep in the boat, rather than a tent with the rest of the team. She also participates in kayaking and dragon boats.

On the back right position paddles Lujza Dugasová, the most relaxed and calm member of our team. She also joined Facebook in November, claims to be seeing someone but boyfriend still remains Mr. Unknown!!! She reached the level 257 in candy crush so far. She loves rafting the most, out of all sports she does. I guess there are the best parties. As a proper monkey, she likes to climb various fences and that’s why her pants are always full of holes.

Lastly, Barbora Majorošová, back left position, is the newest addition to our club. But she quickly became a valuable member of the crew. As everyone before, she joined FB in 2008 (see we are predestined to be part of one team!). Her FB claims she is in a secret relationship but her profile picture shows something else. She immediately became addicted to various games, currently plays Pengle every day. She loves all water sports from swimming to kayaking and rafting. ”

What does participating in this competition mean to you, and do you have any expectations?

“About the meaning, I would say that this is our first big competition, so we are really looking forward to it :) As for expectations, I can’t say we have any, because we haven’t competed with this combination of people in our boat at any world event, and also we’ve got no idea who our opponents are. So for now we prefer not to have any special expectations.”

What discipline does your team prefer?

“We agreed that we like slalom and sprint, as for downriver… it’s too loooong!!! :D”

What are your plans for the future? Are you going to WRC R4 Brazil?

“As for the future, it is really hard to say what’s gonna happen next year. But if we manage to finally have most of the members of our crew in Slovakia (and not somewhere abroad on exchange studies), there is a big possibility we will be training as much as we can. Maybe we will try some more international competitions – who knows. We don’t know yet if we’ll go to Brazil, but we hope that maybe after this competition, there will be someone willing to sponsor our team :)”

Do you want to thank someone?

“We would like to thank the other raft clubs and teams that have helped us out a lot and continue to make our trainings funny and enjoyable, to Starfit for letting us work out in a gym, and to people who at least tried to help us, but we are incredibly stubborn. We also want to thank Latner s.r.o., to Dušo and Kika’s father for giving up their paddles for us…” – Thanks on our behalf for helping these young girls.

I will soon have the opportunity to watch their performance. I want them to persevere in what they have started and to enjoy rafting in the years to come. We wish you a good stroke.

“P.S.: But most of all we are hoping the men’s’ junior team will show us how to play  Gorodky!”