News
You are here: Home1 / News2 / Tour rafting3 / Soviet Era Rafting – a step into the past 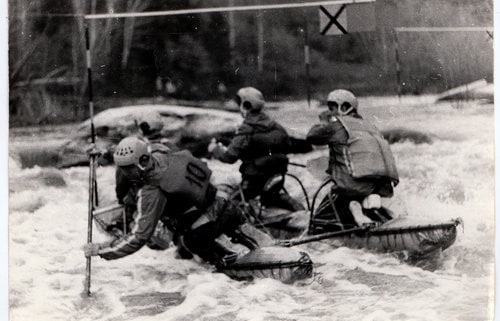 Vladimir Petukhov takes us back to soviet era rafting in this interview by Rafting Magazine. 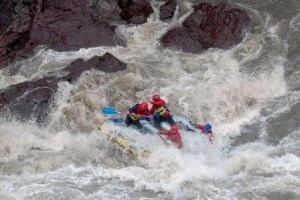 In order to understand the situation fully, I will say that the beginning of my passion for whitewater rafting started in the Soviet period. This means that there were a lot of whitewater rivers and there was a great desire to paddle, but there was no equipment, no boats for paddling, it was a time of all-out deficit. Therefore, I made my first catamaran from a tent for a truck and medical rubber. Another difficult circumstance for rafting was my work. I graduated from the Higher Military Aviation Institute and worked first at the military airfield, then as a teacher at the Military Aviation School. To participate in river competitions or expeditions, I had to violate the charter and regulations of the military institution, but my passion for rafting was stronger than anything else.

I managed to make long boat trips along the rivers of Tajikistan, Kazakhstan, and the Altai on my homemade catamaran. In the environment where I lived and worked, my passion was quite strange. 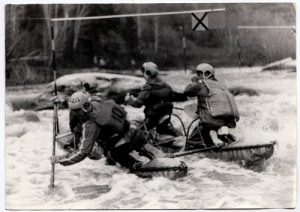 There was a funny time I found in an old abandoned warehouse two wooden sports kayaks, 5 meters long each one. I really wanted to interest other guys in paddling, and I had to move the “precious” kayaks to another city. Kayaks did not fit into the train’s wagon through the main entry. I had to push them through the windows from the platform and kayaks were still sticking out of the window. So I filled two wagons, and delayed the train for an hour.

I brought in many guys from my military service to boating and it changed their life. I do not want to say that all everyone who tried rafting became fans of whitewater, but those people who really fell in love with boating could not keep their usual way of life. 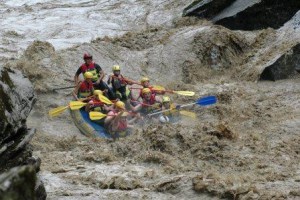 16 years ago, I moved to the Caucasus Mountains, a region with an abundance of rivers. I had decided to stop combining military service with boating, but at that time if you told ordinary people that you wanted to invite them rafting they wouldn’t understand you. Almost no one knew what rafting was. There was not one commercial company in my region that offered river rafting, so I decided to be the first.

In addition to the fact that people did not know about the rafting, there were no suitable options to buy equipment. I didn’t have enough money, but there was no supply of necessary goods in the market. Well… I was not too lazy to go by train to the border with China, more than 6,000 miles, to take on everything there! It was funny that I as a member of the military had a driver’s license, but I’ve never driven before. For two weeks, while I was driving a new van and equipment from China to home, I learned not only to drive a car, but also to repair it. 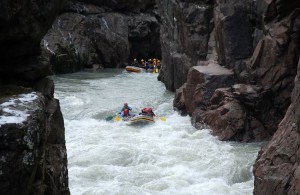 Now, every river has rafting companies. Many firms compete with each other, because this service has become very popular! During all the years of business, I changed the concept of my rafting, according to my attitude to this one. In the beginning, I was more inclined to the sport of rafting. I perceived rafting as overcoming adversity and a sport. Over the years, I have learned more about the needs of people, my customers and greatly expanded the concept. I realized that it is important for people to be part of the team, because rafting involves joint efforts. A man experiences a variety of emotions and situations during one whitewater trip, tries to paddle in the team, and feels a sense of safety from it.

Another concept I have tried to develop is that boating gives a unique chance to be in the heart of gorges of mountain rivers. To watch the wildlife as well as feel and be in the power of the flow of the river. Rafting is an opportunity to use the energy of the river in a beautiful eco-friendly way to have clear and peaceful goals on the river. I think these concepts attract people to rafting… and that’s why I’m on the water to.

RM: You mentioned your trip across Russia from China, what was the hardest part of that for you psychologically?

Vlad: First, in the east of the country, I bought a minibus on a large market of Japanese used cars. I had enough money only for a car that was sold for disassembly. That is, it was an old van that was planned to disassemble for parts. I do not want to specifically advertise the Japanese auto industry, but this minibus is still on the move. 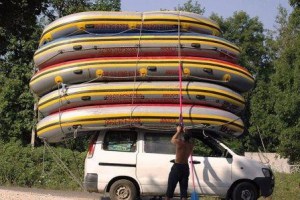 The most difficult part of the route was a segment in the region of Lake Baikal, eastern Siberia. There was no asphalt on the federal highway, and I drove 125 miles all day. In some cities, I met old friends of fellow students, so I was not lonely.

By the way, driving through the Altai (the Mecca of Russian rafting in central Siberia), I watched how commercial rafting was developed there. During my whitewater travels in the 80s, only tourists and athletes went boating. By the year 2000, Altai became the first region where commercial rafting appeared. And I watched that there were many foreigners among the tourists. This again suggests that Russian tourists later learned what commercial boating is. Continue reading A Step Into the Past of Soviet Era Rafting …

Vladimir Petukhov is the founder of Masterraft company located in the Adygheya Republic. 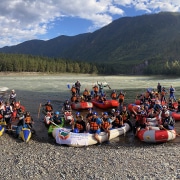 Friends for life at the 2020 White Water of Siberia Forum 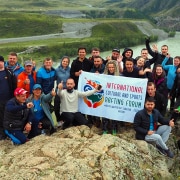 White Water of Siberia Forum 2020 starts on a high