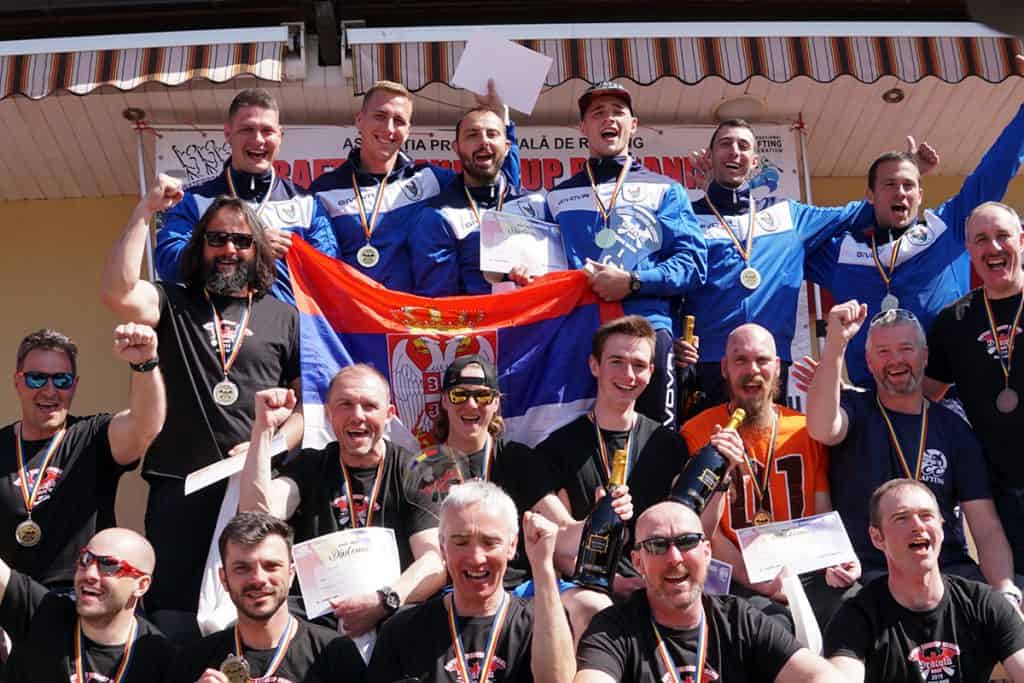 This year’ IRF Euro Cup series started on the Buzau River in Nehoiu, Romania, fondly referred to as the Dracula Race. Teams from as far away as Great Britain attended the event and were delighted to enjoy a great river in very different surroundings. Team “VIR” of Serbia nearly took a clean sweep of medals, just being beaten in the Sprint by team M.O.E. of Romania, who placed 2nd Overall. Vointa Arad of Romania were looking good for 3rd place, but a 5th in Slalom gave 3rd Overall to team HPP Notts of Great Britain. In the Open Women it was SKK KK NSA of Bulgaria once again taking the overall win by claiming 1st in the Downriver and Slalom. Great Britain’s HPP Notts team took 2nd with wins in Sprint and Slalom, and Atom Kozlodui of Bulgaria took 3rd. Results; Photos

The second event in the series is a new addition to the Euro Cup series – EC Nottingham – which was held at the Holme Pierrepont White Water Course in Nottingham and hosted by British Rafting. The Red Rose Rafting team, as the only women’s team, raced in the Men’s category and claimed a very good 3rd Overall! A great showing and hopefully will stand them in good stead when they compete at the 2019 WRC in Australia next month. The Overall winner was Masters of Rubber with HPCC Rafting taking 3rd.
Results, Photos: -1-, -2-, -3-. H2H Video

EC Priboj on the River Lim in Serbia had an excellent turn out of 32 teams, 15 of those competing in the National Champs! It was great to see Serbian women’s teams coming back into action again. The hosts, Rafting Association of Serbia, are doing an excellent job of promoting rafting in Serbia and also ran a university race alongside the EC race. Eko Lim, the local club, took the Open Men’s and Open Women’s Overall titles, the men’s with a clean sweep of H2H, Slalom and Downriver. In Open Men it was Team VIR who took 2nd Overall, and Kula Stalic 3rd. In the Open Women it was Adventure Net then Atom of Bulgaria that took the final podium spots.
Results. Photos

Last weekend saw the ever popular EC Wildalpen running at a high water level (but at least not covered in snow like in 2017!). This event had teams coming from a total of 12 nations! Raft Club Sokol Hodonin of Czech Open Men started slowly but claimed the Slalom win and 2nd in Downriver to claim the Overall win. Azimut-Sodis who came all the way from Russia took the Overall Silver, with a much improved Team Augsburg claiming a well deserved 3rd. The Dutch Rafting Team took 1st Overall in the Open Women with a win in Sprint, H2H and Downriver. 2nd Overall and Gold in Slalom went to a strong looking Team DenLand (a mixed team of Danish & Dutch women), and 3rd to Team Troja of Czech.
Results: OM, U23M, OW; Photos

The series standings overall so far in R6 sees HPCC Rafting/HPP Notts of Great Britain the clear leaders so far in the Open Men’s category, having competed and done well at two events. SKK KK NSA of Bulgaria lead in the Open Women. In R4 it is Dayak of BiH that lead. And the Dutch Rafting Team lead the Open Women.
Results so far: R6 OW, R6 OM, R4 OW, R4 OM.

The next Euro Cup race will be after the WRC and will be on the 15 June, in Solkan, Slovenia – EC Soca. See you there!