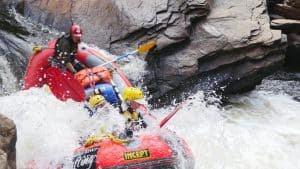 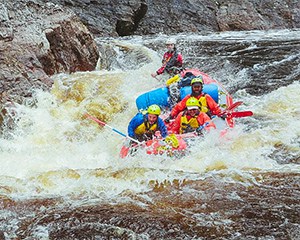 Heading to Australia for IRF WRC Pre-Worlds this year or IRF WRC next year? Why not extend your trip to include Tasmania!

Tucked away in a quiet corner of Australia is one of the greatest gems of the Australian wilderness The Franklin River. This incredible river is no place for the casual adventurer and represents one of the most remote commercially run rivers in the world. The Franklin is typically run as an 8-10 day expedition where the only way out after you put in is either downstream or via helicopter.

The Franklin River flows for 78 miles (125 kms) from the Cheyne Range to the Gordon River through the Franklin-Gordon Wild Rivers National Park, a part of the Tasmanian Wilderness World Heritage Area. Rafting trips typically put in for their journey at the Collingwood River bridge,1116 Ft (340m) above sea level, and finish at the Gordon River. Rafters can then either catch the Gordon River ferry at Heritage Landing, or charter a float plane or yacht to pick them up from Sir John Falls camp. 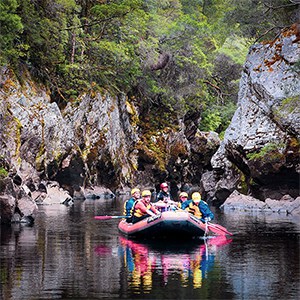 The Franklin is situated on Tasmania’s west coast which boats a much cooler and wetter climate when compared to the east coast. Frequent low pressure systems hit the west coast causing heavy rain, snow, and ice.

The West Coast Range blocks these systems from impacting the east, therefore making the West Coast a rain catchment with some areas receiving over 79 in (2,000 mm) of rain per year. The rivers catchment is large and subject to very high rainfall. As a result rapid rises in river levels may be experienced as much as 3 ft (1 m) one meter per hour in the canyon.

Summer is mild with maximum temperatures averaging between 63 °F (17°C) and 70 °F (21°C), though some days still see 50 °F (10 °C) as the high. Despite snowfall usually occurring in winter, it has been known to fall in the middle of summer.

Paddling the Franklin
Paddlers will see everything from class 1 to 6 however commercial companies do not raft the high grade rapids. The Franklin is mostly class 3 rafting but that dependent upon the water level. Although no previous rafting experience is necessary to participate with most outfitters, a basic level of fitness, a thirst for adventure and a love for the outdoors is must for all explorers of the Franklin River canyon. The river’s deep committing gorges are truly an unforgettable sight and while you can expect some decent portages, you will experience a sense of awe that few other rivers in the world can rival.

Preserving the Franklin
In the 1980’s, the Franklin River become synonymous with Australia‘s largest conservation battle of the time, the movement to save the Franklin from the Hydro Tasmania proposed hydro-electric power scheme. A group of young dedicated conservationists took on nearly insurmountable odds to help establish this amazing river as a World Heritage Area worthy of the utmost protection for future generations.

Experiencing what drove these early river pioneers to action will be a memory that will last a lifetime. This river truly is Australia’s hidden gem.

A huge thank you to Franzi and Elias from Franklin River Rafting for the awesome photos and sharing their passion for the Franklin river with us.