The ceremony, which lasted about 90 minutes, in the very sunny and humid weather, was proof that sports has the ability to unite people from various backgrounds and origins. The residents of Pelabuhan Ratu were so excited and honoured that world class athletes were in town that they did not mind that the main road was closed during the ceremony for the teams to parade, causing massive traffic around the city’s downtown. While the local youngsters were fascinated with the fact that there are so many young rafters and they are able to compete in a World Championship, which was an inspiration in itself. The ceremony was also a reunion for 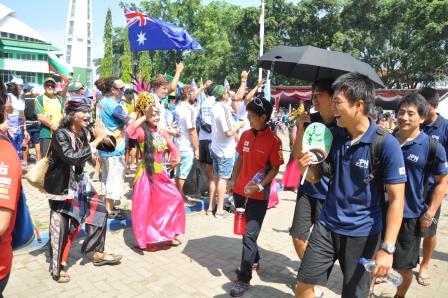 some rafters that hadn’t had a chance yet to meet at the Citarik River. Highlighted by traditional dance and martial arts, the opening became more interesting when all participants, honourable guests and dignitaries joined together to play a couple of songs with the Angklung, the traditional Sundanese bamboo musical instrument, following an introductory crash learning course. Everyone enjoyed receiving the miniature instrument as a souvenir afterwards.

Commander Lalana, who is also the Chief of Indonesia’s Rafting Federation (FAJI), stressed the importance of keeping the championship safe, with zero accidents and incidents.  He also thanked all participants  for being willing to appreciate and later promote the local culture, tradition and culinary delights of the Sundanese (West Javanese people) during the championship. “This is a great opportunity to promote Indonesia’s sport tourism throughout the world. Also a big boost for the local economy. I salute you all!”

After the ceremony, it was back to business. All rafters returned to their accommodations on the marines transport trucks for a 40 minute ride to Cikidang village. The Youth and Junior teams made a quick transit for lunch and to change, then rushed back to the awaiting trucks to take them to the starting line for the 9 km Down River practice. Hopefully after it rained hard in the afternoon for two hours, the water level will be higher than today’s 63 cm.

The Youth and Junior competition will begin with Sprint on Tuesday at 7.00 AM till 10.00 AM local time. After a 30 minute break, continues with Head To Head (H2H). While the Open and Master teams will begin Down River practice at noon. Both Aceng Supendi, Indonesia’s U-19 coach and Insan Saleh, coach of Indonesia’s U-23 team deny they have home advantage as many presume. “We have experienced low water level a lot for months. So it’s still an open battle!” They often remind their young rafters not to get over confident or burdened by expectations of their local supporters.

While Cloe, a member of United Kingdom’s U-19 Female team considers Brazil, Russia and reigning champs New Zealand as their tight contenders for the gold, the major handicap for most foreign rafters is the humidity. “It’s so hot here and we’re still trying to adjust to the course,” says one of UK’s U-23 female rafter. It’s a first for the majority of rafters at Citarik.

The Japanese Male Open team practised at Citarik last year and arrived two weeks ago. Their very early arrival is more for weather adjustment, due to the 11 degrees Celsius pre Winter conditions at home, much lower then the average 28 degrees Celsius in Citarik. The law of nature applies. Only the fittest (not the smartest tacticians) will survive at Citarik. That’s adventure sports for you. Let the games begin…