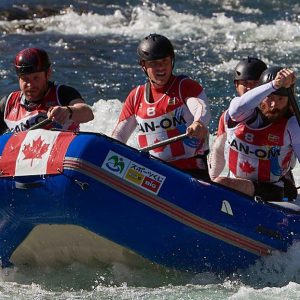 This week we meet the Canadian Men’s rafting team based out of the Whitewater Region in Ontario, Canada. The team have attended several IRF rafting world championships and continue to strive to get better and learn from every event and opportunity. Their club is compiled of a number of veteran raft guides which allows them to field a team to compete as life has a tendency to tie up a few from continually competing every year. This year, they are proud to have a few returning team members to compete and a few fresh faces that will allow them to continue to grow the sport of raft racing in Canada. 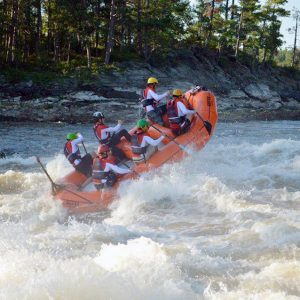 Our team has been pretty scattered around the world which has led us to not being able to practice together very much. Luckily for us we have all been able to get the time to show up a little early and find the chemistry before the competition starts. Our own individual training routines has to remain a trade secret but if you are able to catch up with us and whisper “maple syrup” we just might let it slip.

Gwyn Ashcroft
Gwyn has been chasing summers rafting for River Run on the Ottawa, and Mohaka Rafting in New Zealand for the past few years. When he is not on the water he is busy running Shaggy Designs, making canoes and paddles. Gwyn also finds time to go trail running and canoeing. Gwyn is basically the Gandalf of the team, bestowing wisdom and kickass comedy relief whenever required.

Drew Sellen
Drew grew up in Toronto, Canada. He got his start in whitewater through the kayak club at university which eventually led him to the Ottawa River where he began rafting in 2009.  Since then rafting has kept him traveling around the world experiencing many wonderful places and cultures. Drew has participated in two previous World Rafting Championships, and looks forward to gaining more experience in the raft racing world in Australia.  To keep himself in shape he shouts quotes from Dirty Dancing off mountain tops then bikes down in Rotorua, New Zealand, the place he currently calls home. Drew has been raft guiding on the Kaituna River this season, and has ample opportunities in the evenings to kayak and raft for training purposes.

Jake Suchorab
Hailing from the nation’s capital of Ottawa, Jake has had trouble in staying one place for too long; partially due to enjoying the nomad lifestyle and partially because he believes he has been following Big Foot’s trail. This will be Jake’s third world rafting championship after attending Brazil in 2014 and Japan in 2017. He started on the Ottawa river working for RiverRun, but has since worked in New Zealand and on the Kicking horse in Golden, BC. Jake has been training daily with teammate Aj and hopes to be in the best shape he has ever competed in. 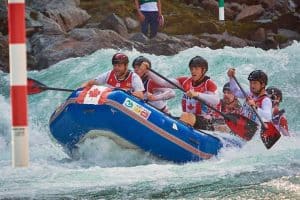 New Kids On The Block

Marc Godbout
Marc is a 22 year old passionate whitewater paddler. He has been rafting on the Ottawa River for 4 seasons which has led him to join Team Canada and push his rafting to the next level. He has been competing on the C1 and OC1 Canadian Freestyle teams for 3 years now, and will be heading to Spain this summer for World Freestyle Championships. Marc also has a fascination with pedal boats and continues to pedal his way into many firsts and into our hearts. He spent this winter cross-training off the water with ice and alpine climbing in the Rockies to come into paddling season stronger than ever.

AJ Morowski
Aj is from the GTA and started rafting in 2011 on the Ottawa river with RiverRun Rafting and has enjoyed plenty of  rivers around the world since. His passion for white water continues to burn as does his love for skiing and beer. Aj can usually be found accompanied by his faithful companion Disco Duck. He is excited to compete for the first time and represent the maple leaf. He is coming into the competition hungry and with a refreshing new point of view. He is “Excited to paddle across the finish line!!”

Christian Scotten
Chris has been training on the near frozen waters of Canada, paddling in temperatures down to -10 Celsius. When the weather has been too cold, he has been biting the bullet and taking the training indoors to the bike and erg. Luckily he has been able to escape the frozen wasteland for a month long rafting trip through the Grand Canyon and a surf trip to Costa Rica. Christian has an overwhelmingly large love for snowmen.

Ian Stokes
Ian has been researching the hydrology of rocks and if it will ever be possible to create a rock raft. So far the research says decidedly no but he shook a magic 8 ball and it gave him enough confidence to continue his cutting edge research. Ian works on the Ottawa river for OWL rafting and has been training with fellow teammate Christian rafting the grand canyon. 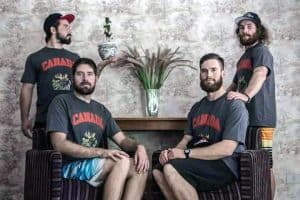 You can follow the team on social media:
www.facebook.com/CanadianRaftTeam
www.instagram.com/teamcanadaraft

Team Canada Open Men are part of our River Family. Are You?