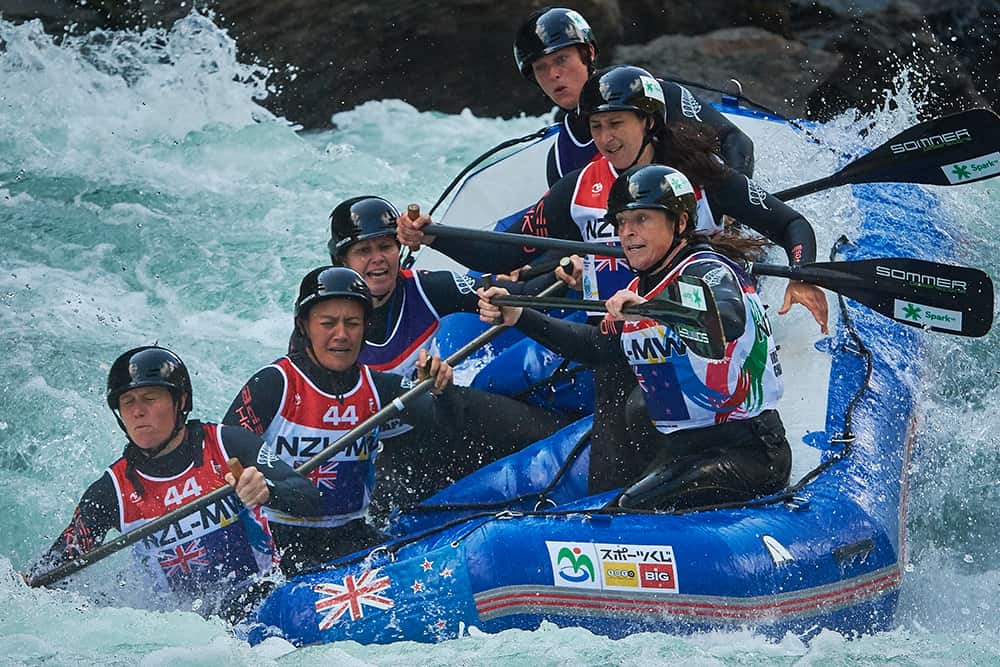 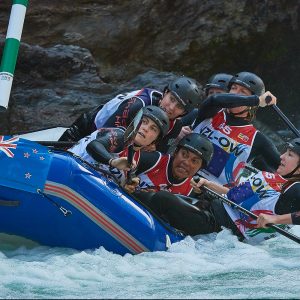 With the IRF’s World Rafting Championship 2019 being held in May this year, it means for the first time in 20 years (in fact… ever!), New Zealand teams get to train in summer months! This is something the New Zealand Open Women are relishing! This group of ladies love to spend their time playing on the beautiful waterways of (Aotearoa) New Zealand. A combination of surfing, out rigging, white water paddling and slalom paddling, is where you will find the New Zealand women’s rafting team spending there time under the sun.

Training consists of the above play time activities and meeting together 1 – 2 times per week to jump in a raft and thrash about on our local (awa) river, the Kaituna. Training in the summer makes the whole thing so enjoyable. They’re loving it! 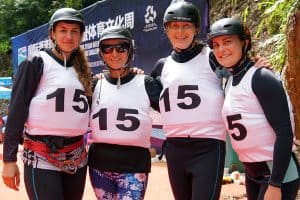 So who is in the team for Australia?
Buba (Denise) Martin: I started raft guiding on the Kaituna river in 1995, then traveled internationally working on many different rivers around the globe. I have six World Rafting Championship titles, my hobbies include all play methods on water. I work in the natural health industry as a Medical Herbalist, currently working on a new venture, which would introduce native New Zealand herbs to the rest of the world.
As a team we have been raft racing since 1999, Our team have podium-ed Overall at all the World Rafting Championship races we have attended. We have a strong team who have paddled together in many campaigns. We have great experience and fingers crossed we will do well again this time around, kiwis have a mongrel attitude, that works great in competitive sports.
Without a doubt, the IRF are the world’s leading federation for whitewater rafting competitions, the professionalism, high standards and experience which has been gained through running the World Championship events, all around the world for over 20 years. Hats off to all members of the IRF who mainly work voluntarily, especially Sue Liell-Cock who has been with this federation from the start, she works silently in the background making sure everything runs smoothly.

Nikki Whitehead: Been kayaking since she was ten years old and has competed in slalom internationally in the past. She has been in the raft team since 2013 and really enjoys raft racing. Nikki lives in Okere Falls so that she can kayak the Kaituna River when ever.
Looking forward to WRC and hoping to do well but most of all have fun.
IRF are doing a great job especially with the other races in between R6 WRC. Great organisation with a good philosophy. Bringing people from all over the world to compete on amazing rivers and meeting different people. 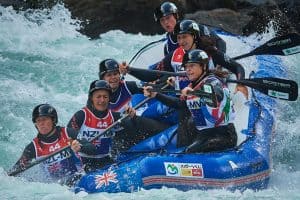 Nikki Kelly: As a mother of 4, and working as an Adventure Tourism tutor in Rotorua Bay of Plenty, Nikki has been a member of the New Zealand women’s rafting team since 1999, a team that has won 5 world championships and podium at every worlds attended.
In 2017 Nikki’s 26 years of kayaking and rafting was honoured by being inducted into the International White Water Hall of Fame. A post from the Hall of Fame organisation states “Nikki’s achievements alone are inspirational to all paddlers, but in particular to woman paddlers who have seen her achieve greatness in a discipline that is has been reasonably dominated by male dominated since she first started paddling”.
Nikki is looking forward to battling it out on the world stage once again on the Tully river in Australia. The experience in our New Zealand Woman’s team is unmatched and I believe we are viable contenders for a podium finish.
Strengths of the IRF is that they have the best interest of all rafting nations at heart. I think the IRF does a fantastic job coordinating the World Rafting Championships and bringing teams together that share the same passion for being on the river.

Sarah Uhl: Sarah is the owner and creator of the famous Okere Falls store which is based out at the famous Kaituna River. Sarah has paddled white water and waka ama for 30 years. She just loves paddling and being on the water. Favourite destinations are Chile and Hawaii.
Thoughts on WRC Australia… it’s going to be awesome. We have a super experienced team, definitely going there to race hard.
Thoughts on IRF…. I am pushing for all New Zealand teams to race plastic free and fully promote this. As paddlers we need to ask the IRF to think the same way. The health of our environment, our rivers and oceans is critical to what we all do. Indonesia highlighted this for me. I felt very powerless at the time but have since made it my personal mission to reduce my own ‘single use plastic’ use and influence those people around me to do the same. 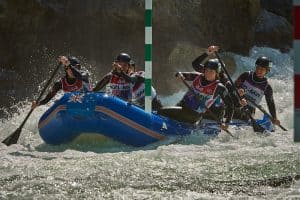 Kelly Wood: This will be Kelly’s 7th worlds campaign with the NZ woman’s team. Love being on the river and being able to experience amazing rivers all over the world as well as training and competing to a high level. Live in Gisborne, have 2 boys (2 and 4).
Work as a firefighter for Fire and Emergency NZ. Background in whitewater kayaking, waka ama. Love hanging out with the ladies and talking crap. The NZ ladies always go to win. which is what we will be out to do this time.
I think the IRF does a fantastic job coordinating the World Rafting Championships and bringing teams together that share the same passion for being on the river.

Ranj Rapanna: Ranj has been paddling for 20 years, winning many Outrigger team sprint and long distance races both nationally and internationally. Currently a member of the double gold master women w6 sprint champions and w1 bronze medallist.
I also represent NZ in dragon boating, and touch rugby, I was a member of the world champion master women’s whitewater rafting team in 2017 and 2017 coach and paddler of NZ Elite Women Long Distance World Championships.
We are out to win! No doubt about it!

Marnie Fornusek: Currently working and travelling through Chile, Marnie enjoys being out on the water and racing. Over the years have spent plenty of time kayaking whitewater (wildwater, slalom) and have done some raft racing. Also enjoy getting out on SUP in the surf. I started rafting with a season as a raft guide on the Kaituna River in 93/94. Raced at the Camel Challenge (British Ladies) on the Zambezi River in 1996. Raced NZ raft team at World Champs in NZ (2013 – R6 masters), Indonesia (2015 – R6 open), Dubai (2016 – masters) and 2018 China and Tibet R4 races. Normally work as an engineer.

4 steps to success – from novice to elite rafting