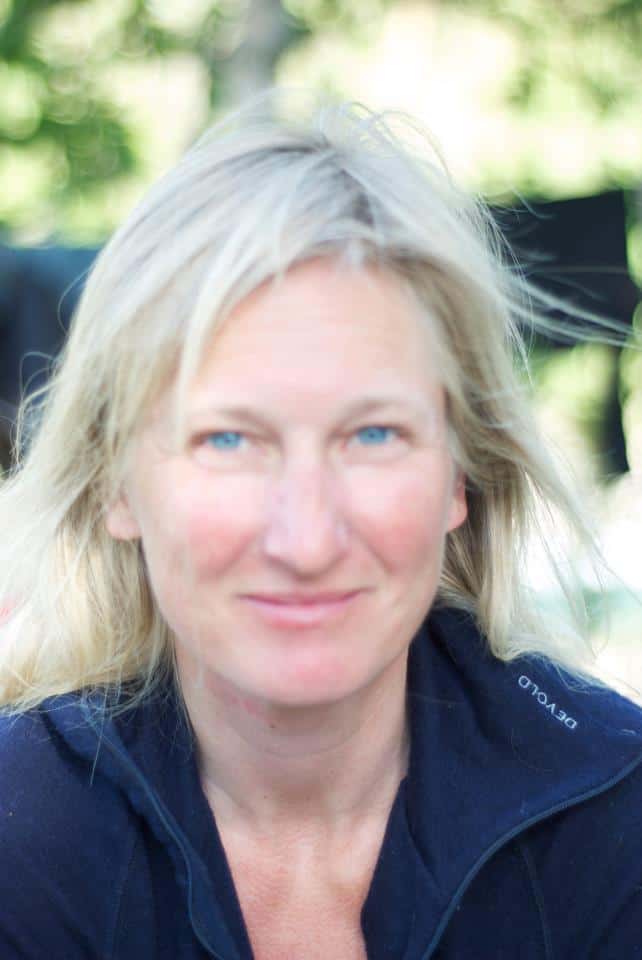 In the first of our River Family series, we meet Ine Skjørten, kayaker, raft guide, and raft race competitor with the most number of IRF championships under her belt and an ever smiling face on the raft race circuit.

Throughout this series, we interview the people that make rafting around the globe what it is – you! And so we start with Ine Skjorten… 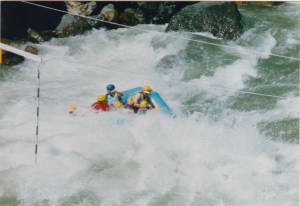 How did you get started in raft racing?
In 1990, working on the Sjoa river here in Norway, a Costa Rican guide told about the Project RAFT 1991 pre world event in Costa Rica. We were at the time 7 female river guides working and two of us (Sølvi still on the team) thought it was a great idea to go. So we wrote to the women guides in Norway and asked who would like to go. We met up, trained in a pool in Oslo over the winter, did gym training and off we went together with a team from the company we worked in; NWR including the two owners Grethe Høstaker and Kjell Fladen.

What has motivated you to keep racing?
Being on the river is a combination of nature, physical, friends and challenge. Being on the
river is my happy place, when smiling I am a better every day person. It was hard to get a team together after 1991. In 1993 in Turkey three of us went – stood up in the middle of camp – and asked if there were three more who would like to join our now international team. We were then three Norwegians, one Israeli and two Americans competing in the event. In 95 – on the Zambezi we were a mixed Norwegian team with the sixth being the Canadian reserve who we convinced on the plane down to come with us. After that I lost the motivation and there were even fewer ladies in the rafting business at home. The western part of Norway, the Voss area later picked it up and we had a team in Tsjekkia in 2003. More were there to drive a team and I went with them in 2006 to Ecuador, 2009 in Bosnia and since then we have been a east Norway based team. 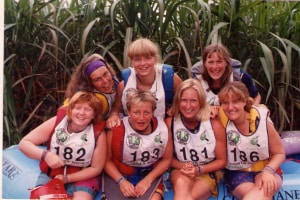 Which has been your most memorable race event and why? Stood at the top of rapid #5 on the Zambezi river, coming from medium to small volume rivers at home I will never forget. We were there with team Sweden scouting and we just looked at each other wondering where the line was. Obviously when you know, the line is
easy once you enter at the right spot. But reading the river based on your own judgment and not just following is so much more rewarding and fun!

How many medals have you won over the years? Which was the funniest/most ironic? In IRF WRC R6 in Ecuador in 2005 we won bronze in H2H. In 2017 in Japan WRC R6 we got 4th in sprint in the open class which we appreciated one. In the Masterclass a few medals have come our way; gold in H2H in Indonesia 2015, and Al Ain 2016 and some silver and bronzes in the same championships. 3rd overall recently in China, Wupai river we are also very happy with. Seems we are getting better by the years! :) We definitely kick into high gear in the H2H’s. Only the last two years have we had gates to
practise slalom in, however with a 6 month winter and 8 hours apart its is not a weekly
exercise. It just takes longer time to get better…. Since 2015 we are the same team, and
we are still very motivated to perform even better. 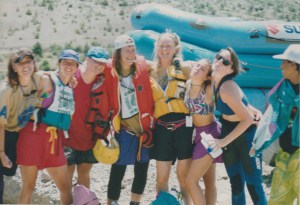 Worst moment on a river?
BioBio in Chile, 1995, had a long swim and was the most down stream person on the trip. Had not been there before, did not know how long the rapids would last, too tired to swim to shore after a few attempts…. kind of out of my body experience. Most embarrassing … photo boating in Costa Rica, Pacuare river, swam…..did circle around in the back wash of a stopper, then I was passed by the safety boater and then the trip… haha…

What do you do outside of rafting – how do you maintain a life balance?
Maintain a balance…. hmmm…. there are many balances… I try not to have too much on my
plate, to have room for the unexpected. That is my inner balance. One part office work,
one part training / kayaking, one part use my brain, one part creativity. The most important balance is with nature. To go at natures pace, to stay connected with nature, not to abuse
nature. Stepping outside the house on the grass and feel the grass under bare feet. Listen
to the wind in the trees, the birds, stay up late and watch the change of the light. Try not to
have, own or buy too much. Luckily my husband has and lives by the same values, so we
help each other with this. In the winter I work as a psychologist. In the summer I work and
play with the river, teach kayaking, raft guiding, hang out with my husband who also is a river person. Tend the garden, the veggies…. look after our little river based business Planet River. 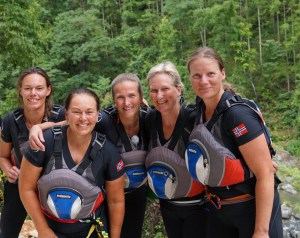 What do you think is the key strength of the IRF? IRF is a democratic organisation. It is important for me that IRF has roots in the philosophy of Jib Ellison and Project RAFTS formulations about the close relationship and interdependency between man and nature. IRF has organised and run professional competitions for over 20 years. This proves the competency, ability and will to develop the sport. I think IRF does a great job for the sport.

When will we see you next? Next up here is the Sjoa Raft race 11th July, then Danish White Water Games in September in Dala-Floda in Sweden and then off to R4 IRF WRC in Argentina.

Ine Skjørten is one of our River Family. Are You?