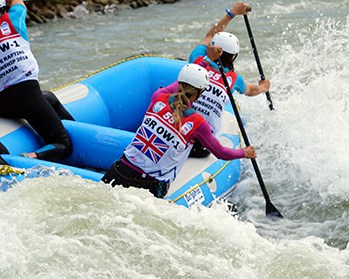 The IRF European Rafting Championships with a world twist in Čunovo, Slovakia proved a showcase of talent from 67 teams from 14 countries across the continent – plus the Open Men’s team from Japan!

Faces new and old to IRF competitions showed up in Čunovo in the days leading up to the competition. All came with their game faces on – five teams even came with jet lag and varying degrees of accompanying luggage having just competed in the IRF Ziyuan Rafting Festival in China! The sun shone, spirits were high and the water flowed consistently – you couldn’t ask for a better start to an IRF European Championship. 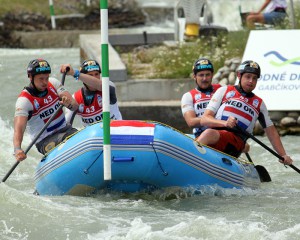 Czech Republic, Great Britain and one of the IRF’s founding member nations, Russia, sent the most number of teams (13 each, and 14 for Russia), followed closely by hosts Slovakia with nine teams. We had teams across categories from Austria, Belgium, Bosnia and Herzegovina, Bulgaria, Denmark, Finland, Hungary, Netherlands, Serbia, Slovenia and Japan.

By and large the largest numbers of supporters came from Slovenia with the (literal) bus loads of supporters arriving to witness the Slalom and Downriver – they added much to the supporter spirit all in their bright green t-shirts and cheering on all teams regardless of their origin – but don’t stand in their way of cheering of Slovenia or you may get deafened by the calling cry of their vuvuzelas! Everyone’s favourite IRF Judge, Milan, popped in on the Saturday to cheer on his home nation too!

Training was blessed with gentle breezes and bright sunshine. You could see a lot of planning and tactics in observing competitor teams on the course – many a camera and notebook were in the hands of team mates and managers alike. During training there was a Judge’s Workshop and New Judges Course – by the end of the week, we welcomed six new IRF General Judges to our family – one from Italy, one from Serbia, one from Denmark and three from Great Britain. 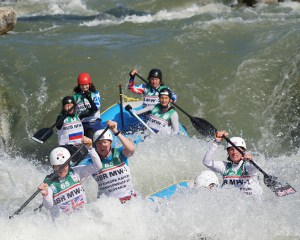 Sprint and Head-to-Head took place on the same day for Juniors and Youth, followed the next day for Masters and Open. As the first major competition to employ the new Head-to-Head rules, we experienced a couple of hiccups in the deployment of the buoys but we’d like to thank all teams for bearing with us and resulting in a challenging and thoroughly engaging display of tactics and rafting challenges.

We could not have asked for a better result – gone were the days of knowing who would win a Head-to-Head challenge based solely on lane choice – tactics and raft-to-raft contact came into play – there were some extremely close calls where it was not clear who the winner would be until the last 30 metres of the course – sometimes even less!

The Slalom course was at first sight thought quite simple by several teams but by the end of the day we all recognised that the course was designed to showcase talent, strength and tactics across the board. The day started with several gasps from spectators as we had three flips in Gate 6 – a seemingly innocent downstream but with an unsuspecting current and a need to switch direction to ready themselves for Gate 7, it tested many teams in their ability to switch from an upstream right into the flow which pushed hard right to get left in order to line themselves up for an upstream right at Gate 7. 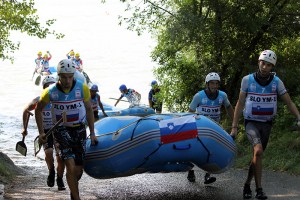 Gate 7 proved tough for many teams with a large eddy, an obstructive rock and the need to move from left to right on the entry otherwise ending up in an entry to the eddy quite low and fighting against the current. The majesty and beauty of raft slalom was demonstrated with utmost perfection by the Czech Open Men 1 team with their powerful control and outstanding agility in turning the raft – anyone who denies this expertise doesn’t deserve to witness rafting. You can watch their awesomeness here.

The Slalom medal ceremony was hindered by the weather impacting an outdoor ceremony resulting in a later than expected ceremony. There was a mixup with the awarding in the U19 categories but swiftly rectified by the organisers and a massive sense of community and coming together from everyone involved.

The course for Downriver was set. Four laps for Open Men and Masters Men – three laps for all others. Challenge came in the Captain’s meeting the night before – why are we treating Open Women like they are less capable? It came down to a vote – it resulted in a tie and just when we were going to have to rely on a Jury decision, latecomers to the Captain’s meeting Bulgaria OW2 put in the casting vote – “we trained for four laps so we should race four laps”. Decision made.

Not everyone was happy but it proved the point – Women are just as capable as the Men and shouldn’t be thought of as being any less capable or desiring of the test of strength and endurance!

Downriver day started out with some cloud cover making the Downriver a little less daunting to the Junior and Youth teams but that all disappeared by the time racing for the Masters and Open categories commenced. It was gruelling and exhausting but it sent the message out to the world…. Rafters Are Awesome! Don’t second guess us and don’t think we can’t do what we know we can! 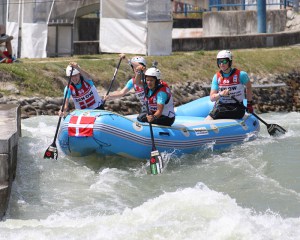 In the end we thought we’d get rained out for the Closing Ceremony and Awards presentations but the weather held and we had an amazing experience sharing the thrills, spills and chills from the week together including an excellent fireworks display. Friendships new and old were kindled or rekindled.

With closing comments, there was a wish and a will for us all to work together for the brighter future that rafting has ahead. What tries to divide us only makes us stronger. We are family.