Two days before the competition a metre of snow was ruthlessly falling in the competition area, leaving us with unprecedented snow levels for EC as well as very low temperatures and additional snow and rain falling, some times at the same time…

The organiser had no doubts as to whether the competition would be held, but the competitors were certainly stunned by the situation. The conditions were incredible for paddling, but the need to push the limits of endurance in a strange way motivated the teams to not give up and so still they came. So surreal that it was nice … and many wanted to be a part of this piece of history …. ;) 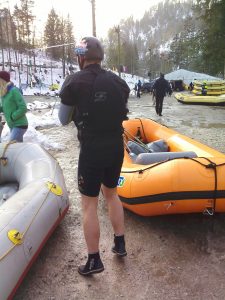 After the first two events on the EC calendar were cancelled, this was the first race where contestants could check to see what form they were in, what they need to still work on, and then there was those countries where this event is also their national selection. So all these fanatics that did not want to miss the opportunity to compete in these conditions totalled 44 teams from 9 countries (GER, BiH, SLO, ITA, HUN, DEN, NED, AUT, SVK), 30 in OM, 10 in OW and 4 in U23 M.

very important item – Only use one Team Name throughout the whole season!

When we warned everyone to bring the right equipment for these severe weather conditions, it was the Italians who were the most creative. It was also very interesting to see the number of birthdays that were celebrated this weekend.

Some things do not change though, and so the competition began with a night time Sprint. The Organisers have invested in additional light paths so that the night paddling looked great.

In the OM category “Nektar Dajak club” defended their title from last season, second were “Schwaben Augsburg Raft team 2” and third place went to “Schwaben Augsburg Raft team 1″.
In the OW category “ITA 1“ took 1st place with an incredibly powerful and strong start and great pace throughout the track. In second place was “Copehangen WS Ladies 2“ with a slightly changed team compared to last year, and we were positively surprised by the young U19 team from “Italy 3 U19 DRD4“  which placed third.

In the U23M category first place was taken by “ITA 5 U23 Addavi” team, second was “ITA 6 U19 Canoa Club Verona” and third place went to “Slovak Young Rafters – SKY Rafters”.

Everyone who froze during training and competition had a good opportunity to warm up during the first party held that evening.

The second day was reserved for H2H in the morning and Slalom at night. Besides all these 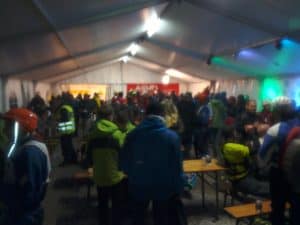 interesting weather conditions, heavy rain fell during the slalom race, during the late night it turned into snow so that the next day was falling rain and snow and snow and rain at the same time … A large white tent was the base for the rafters who wanted to warm up. The organiser provided a large heater, a large orange tube that conducted warm air into the tent. Here the teams warmed up, dried equipment and hung out.


The second day was over and finished with fireworks that were even better than last year, which was a prelude to the main party. 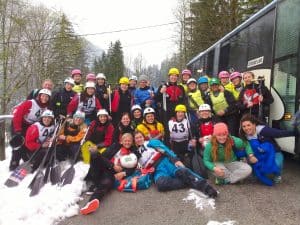 On Sunday, the last day of competition, new, fresh snowfall awaited us. The girls paddled first. Even with the constant paddling the limbs suffered the most from the cold. Neoprene gloves helped slightly in this situation. At the end of the race, exhausted, they helped each other to carry the boats along the steep hill. This is the true spirit of our rafting.

Down River and Overall: 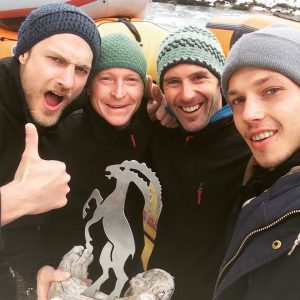 OM – 1. “Schwaben Augsburg Raffteam 2”, 2. “Nektar Dajak club”, 3. “Gimpex” was the placement in the Downriver and for Overall for the Open Men. 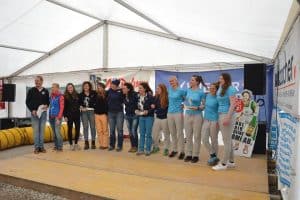 An incredible tempo of “Schwaben Augsburg Raffteam 2” team throughout the Downriver race. No less than 13 strong strokes in 10 seconds, and the number of strokes increased towards the end as was the power invested in each stroke. I can not wait to see their performance in Japan. No doubt it will be a medal around their neck.

The Italian team proved that they are in the better physical condition and with great tempo finished in first place. The Dutch teams work in the gym over the winter paid off, and Denmark wisely invested in a coach who was a great support, a modified team compared to last year, as well as to the new girls in their club.

“ITA 5 U23 Addavi” is real refreshment at our “EC” scene and every praise for their performance throughout the competitions. I hope that we will see Slovak and Slovenian team in Japan this year. After performing in Austria we can expect medals from these young guys too. 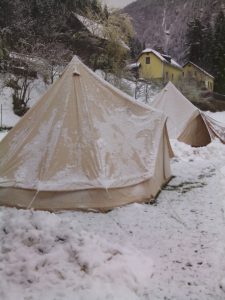 Hats off to all the rafters and all those who were sleeping in a tent in the camp. Thanks to sponsors, organisers, judges, volunteers … and I wish to 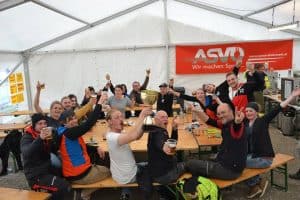 thank the Danish women’s team for lodgings at the last minute and transportation to Vienna.

It was so nice to see all the rafters again.

Wallace!!! The story behind The Dirt Bag Paddlers 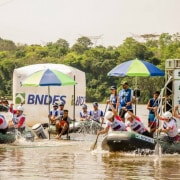