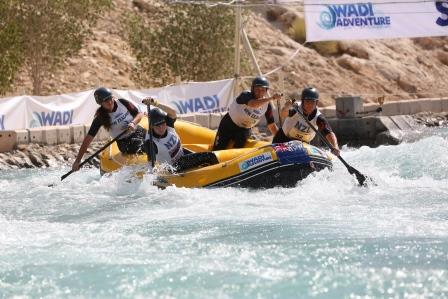 The races ran from 8am until 1:30pm and pitted all 85 participating teams from 28 countries in the Under-19, Under-23 and Masters (40+) divisions (Men and Women). The results are as follows:

In addition to WRC Community Event and Activation, Wadi Adventure also hosted the UAE Flag Day ceremony at its premises’ to showcase the patriotism citizens and residents of the UAE hold for the country. It was a great opportunity for the 27 visiting countries to experience the vast and rich UAE culture. 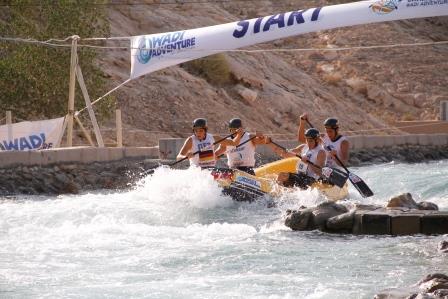 Joe Willie Jones, President of the International Rafting Federation, said: “This year’s championship just keeps getting better, with today’s slalom races treating spectators to the kind of fierce competition and world-class rafting skills that only this tournament can offer. Now that our athletes have measured up their competition and familiarized themselves with the terrain, we can expect even more exciting rounds ahead. Hats off to Germany, Great Britain, Czech Republic, Brazil, and New Zealand for paddling their way to victory today, and the very best to all as we enter day three.”

The course was exceptionally challenging, probably the hardest course seen at a WRC so far. A mistake could cost you dearly as Norway and Czech Master Women both discovered when they flipped at number 2 Gate. Many teams skipped Gates 9 and 13 on their second runs, Gate 9 was very hard to get into and Gate 13, not only was it hard but it also could cause you to miss gate 14 or flip and get 50 seconds or more at the finish line. Hats off to the youth teams who did faster times than the Masters, even some U19 teams!

Mr. Nilesh Mistry, General Manager-Wadi Adventure added: “So far it has been very smooth sailing for the 2016 World Rafting Championship and we would really like to commend the organizers and our staff for ensuring the high quality and utmost safety of each event. There are still a couple more days ahead so once again I invite all residents and guests of the UAE to join us at Wadi Adventure and watch rafting at its finest.”

The 2016 World Rafting Championship is being organized by Wadi Adventure and International Rafting Federation in cooperation with Three60 Leisure under the patronage of H.H. Sheikh Nahyan bin Zayed Al Nahyan, Chairman of the Abu Dhabi Sports Council. The participating teams will battle each other in the Sprint, Head-to-Head (H2H), Slalom and Downriver disciplines of the R4 (four-man) -class tournament until November 5, 2016.

PrevPreviousHome nation, UAE, cheers on their debuting National Rafting Team
NextOpen Slalom and Downriver U19 and U23 WomenNext