What a day of racing! 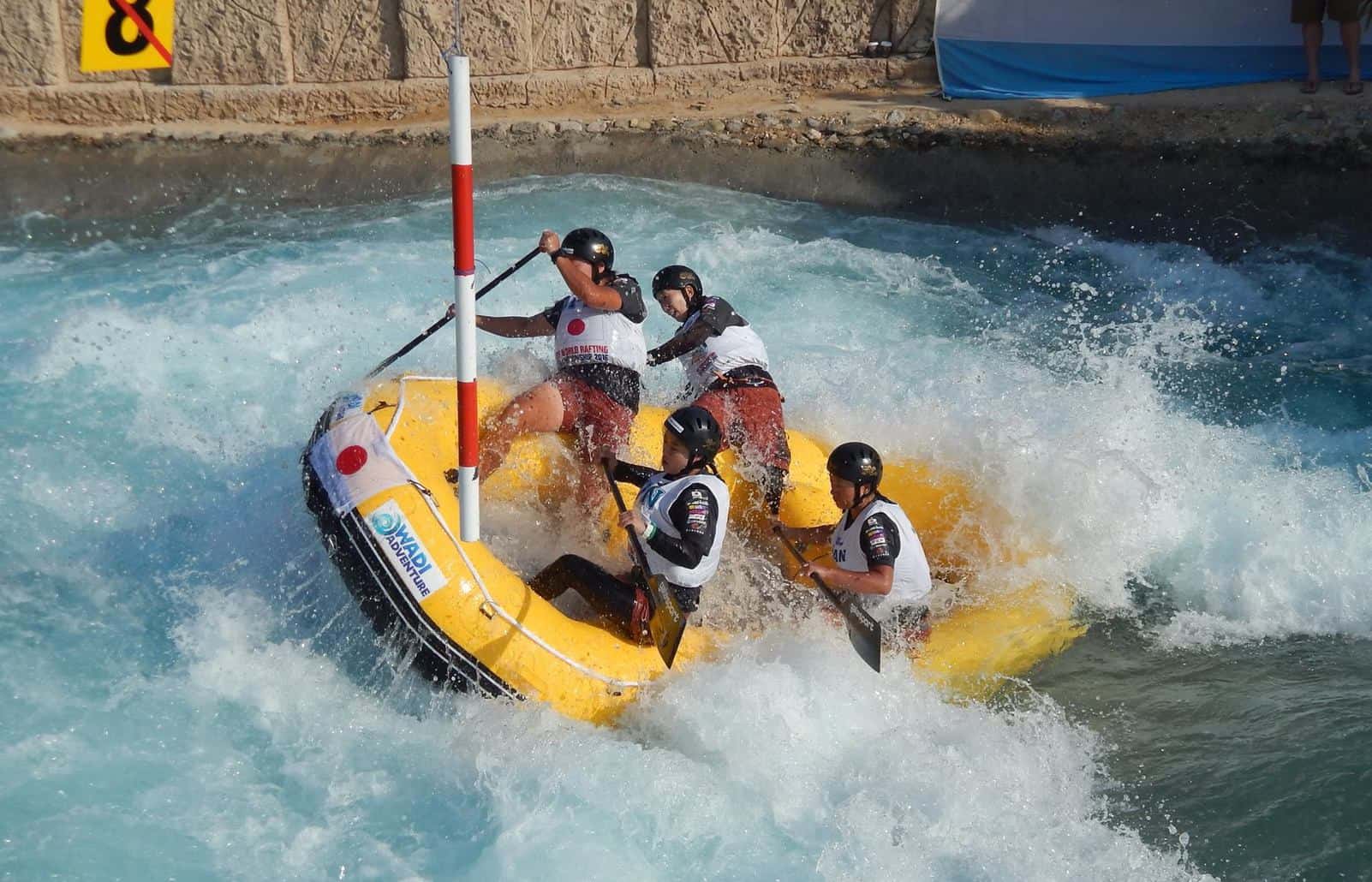 The Open teams had a challenging Slalom course, which, once again, some loved and some hated. Gate 13 proved unlucky for many. The course was designed to be a challenge even for the top teams, not just a speed test, but a river reading skills test – we are a rafting federation after all – born on the wild Zambezi River where reading the river was essential to negotiate the slalom as well as the other disciplines.

For the Open Women, gate 10  was quite a big deciding factor – a 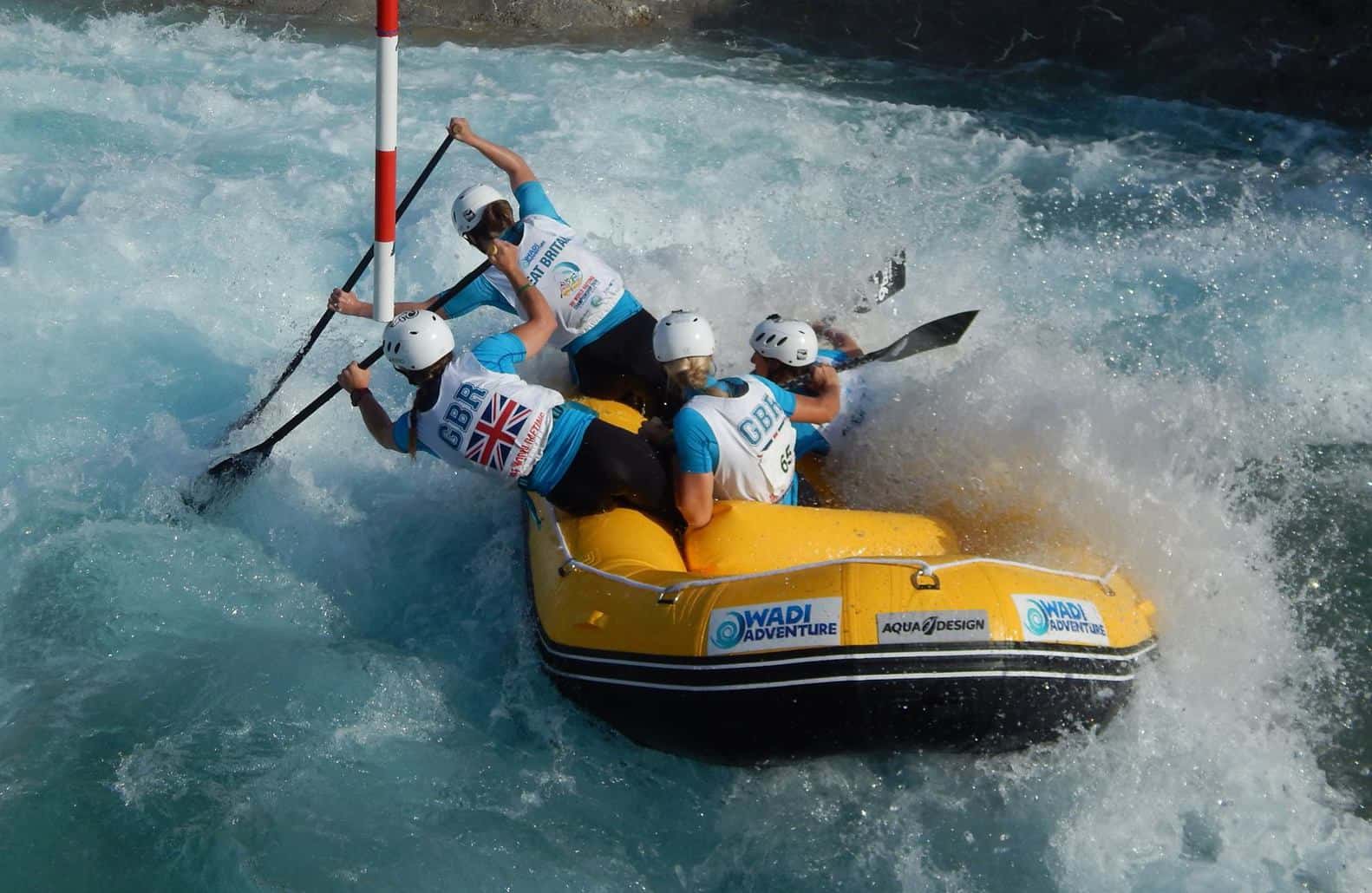 river right upstream gate that needed precision or power to get into. For the men it was Gate 13, which the women’s teams all opted to skip and went for speed instead. Three of the top 9 men’s teams did not make this gate, only 6 of the men’s teams in total made it – you had to approach slowly and slide into the wave and surf gently over to the further gate and get your heads round before you were pushed out, or flipped, as Argentina was on their final run. 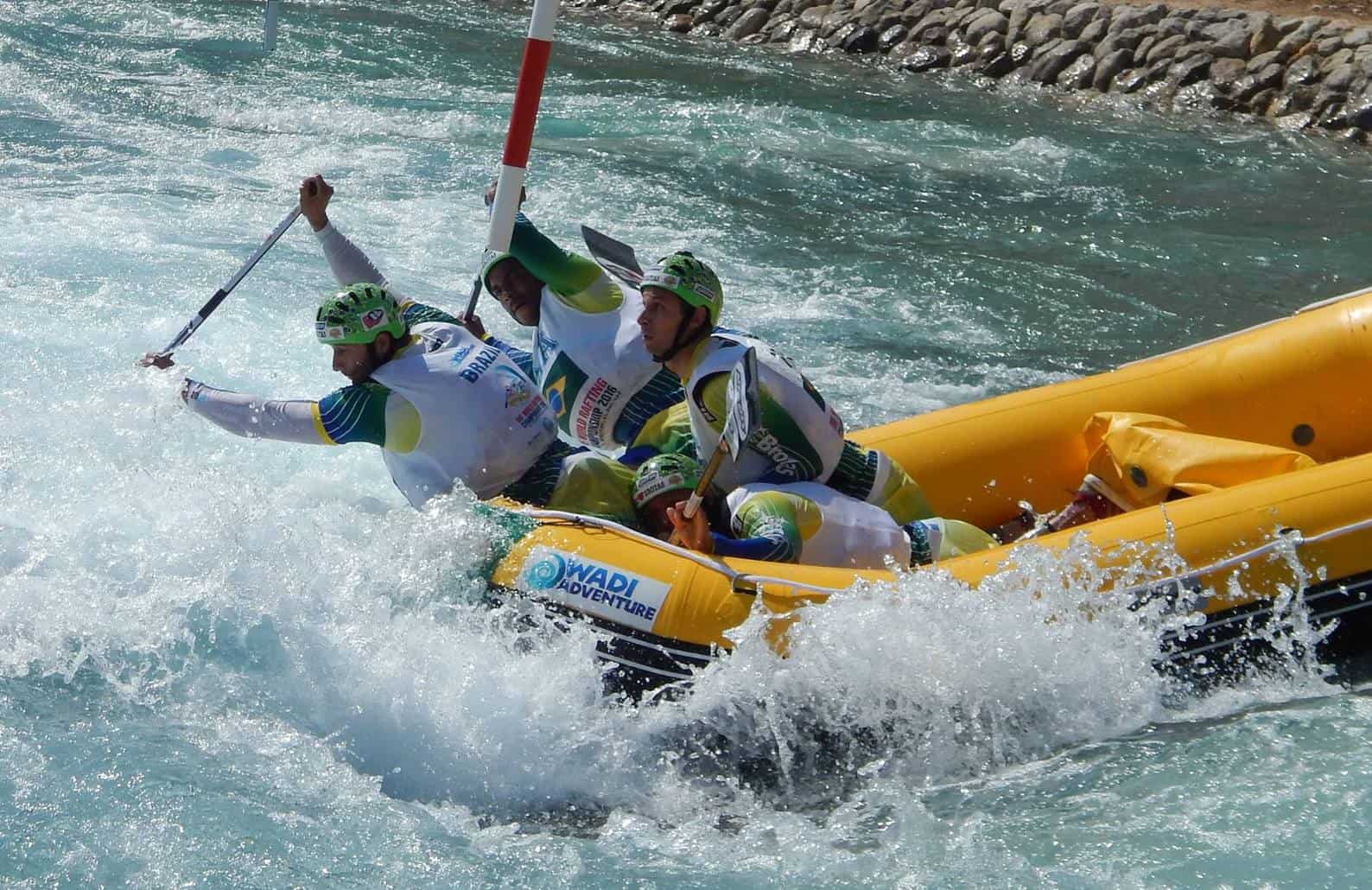 Brazil, ever dominant in Slalom, did it again in the men’s category and took the Gold. Czech, always strong in Slalom took Silver with Argentina taking Bronze.

The channel we are racing on is called the ‘Jeep Channel’. It is 660m long, drops 12m in height, and has 11 cumecs in volume. The largest rapid is the drop in front of the VIP building/ stand – it’s called the ‘Sheikhs Drop’.

Wadi Adventure was opened 5 years ago which is when the channel was built. All the water is treated as swimming pool water (with filters and chemicals, etc). We have 4 pumps, and it takes 3 pumps to run 11 cumecs. When Wadi Adventure was built they had to lay a pipe to the ocean to transport de-salinated water, because the city of Al Ain didn’t have a big enough supply.

Downriver for the U19 men and women and U23 women then took place – a gruelling 5 laps with a  run back to the top with the raft proved too much for some in the intense heat of desert.

Russia dominated the U19 women’s race, taking the Gold and securing the Overall Gold with 964 points. Italy hung onto 2nd place, keeping Great Britain at bay. Third place gave Britain the Silver overall with 880 points and Italy the Bronze with 820. 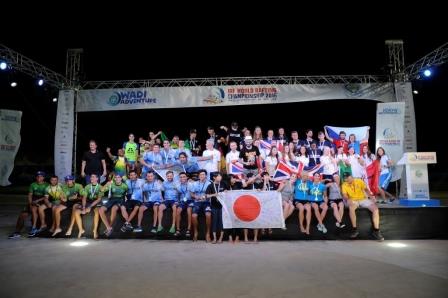 In the U19 men’s category Germany seemed to have a bad start but slowly pulled in and overtook all the other teams, taking the Gold and so claiming Gold overall with 946 points. Argentina took second but it was not enough to get them into the Overall medals.  Brazil took third in the Downriver and that gave them third overall with 808 points. Russia’s fourth place in the Downriver secured them the Silver Overall with 824.

The final race was the U23 Women. The Czech’s unfortunately had someone collapse with the heat and so did not finish, sadly taking them out of the overall medal contention. Japan seemed to have the win in the bag as they set off on the final run back to the top of the course. Due to the heat they walked up and the Great Britain women took advantage of this to overtake and get in the lead. Japan got close on the run down the course but Britain held on to claim Gold with Japan taking Silver and Brazil the Bronze. This meant Brazil and Great Britain had the same points, 895, but due to Russia having won the Slalom, the rules state that they get the higher placing which gives Russia the Gold, Great Britain the Silver and Japan the Bronze.

Downriver U19 Men and Women and U23 Women Results

These teams could now relax and enjoy the wave pool and some dancing and I’m sure will sleep well tonight!