As the demand for International Rafting Federation courses is growing year on year, I am noticing that I am able to travel to new and exciting destinations to run IRF courses. This year alone my travels have taken me to Morocco, Nepal, France, UK and now to the Ukraine for their first ever IRF workshop. 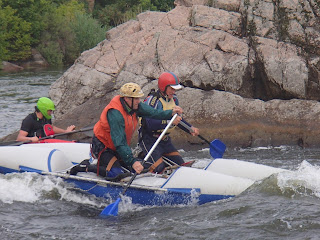 After a period of email communication with Anton Federenko of Kiev Kayaks my bags were packed and I was heading out to the Ukraine not knowing what to expect. Anton kindly picked me up from the airport and took me to his river base in the middle of the Ukraine. We arrived late in the evening and to be honest I was dead beat tired having spent the whole day travelling. So a quick set of hellos then off to bed. The morning of day 1 kicked off with the typical course introductions. Having now delivered a few workshops I now have a set pattern of how I like to run my workshops.

First off I needed to asses a few key points:

I decided to strip everything back to the raw basics. I had arranged the workshop over 5 days which allowed me to really concentrate on getting the basics right before we moved onto more advanced options. We got dressed and made our way to the river. After a quick discussion about PPE (personal protective equipment) we started on safety talks. I was aware that I had a few trip leader candidates. I asked for a volunteer to step forward. Lurii stepped forward and presented a really good safety talk that only needed a few minor tweaks.

After Lurii’s talk we discussed what constitutes a good safety talk and the outcomes were: 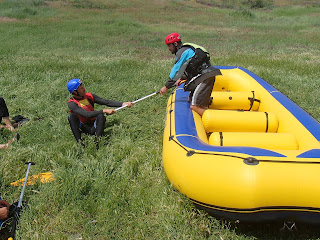 Set the scene:. In order for the talk to be effective the customers must be positioned in such a way that the guide giving the talk is the sole focus of there attention.

Actions speak louder than words: I explained to the guides that in various other rafting destinations around the world not all of your customers will speak the same language as the guide giving the safety talk. We also discussed the fact that people remember actions more than words. A simple exercise of giving a safety talk without talking was shown & appreciated in the fact that all of the relevant information was given in half the time of a normal vocal talk.

Give correct demonstrations. Show your customers exactly what you want them to do. If you show the customers the wrong technique they will practice the wrong 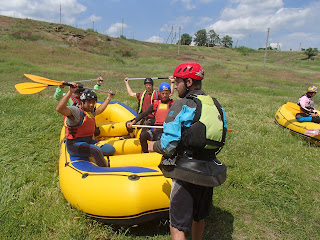 technique. A classic example of this was explaining to the customers that if they fall out of the raft to adapt the whitewater swimming position, where, in fact, we actually want the customers to participate in their own rescue by swimming back to the raft in an aggressive style.

We moved on to the river where I got to see some pretty good guiding skills. We had a nice 200m section of Cclass 3 where we could easily run laps which was great. I did notice that the guides had been running the same lines for years so I spiced things up and got them to run some new lines. Being situated on the bank I could asses more guides a lot quicker. I would have plenty of time to be in a raft with them during the week. I was also useless in the raft as I was struggling with the Ukrainian paddle commands. 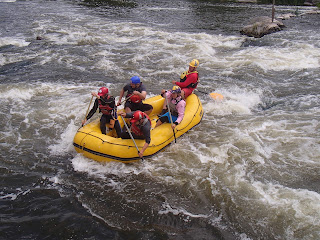 Most of the candidates had come from a racing background. Primarily racing the former Soviet designed inflatable catarafts.

The main issue here was that the candidates were trying to guide the rafts in racing mode which meant a lot of things were rushed. We spent the afternoon slowing things down. We really focused on the guide controlling and steering the raft and using the customers as the “engine”. Instilling the discipline into the crews to only paddle when the guide tells you was interesting to watch. We also looked at the totally new commands of “Get down”, “Hold on” and backwards paddling. After a few hours of hard work we were making good progress.Later in the day we looked at personal whiterwater swimming skills. I needed to instil the thinking process into “why”, “where” & “how” we swim instead of just jumping in.

After an afternoon at trying some new techniques and strategies we ended day 1 with a swimming Olympics. Which I also used as the personal swimming assessment as per the IRF guidelines. 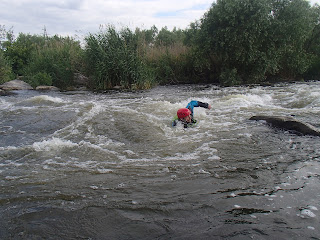 We rounded off day 1 with a introductory rope work session. We practised the following knots: 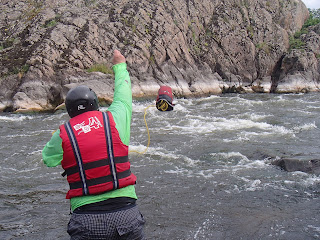 Day 2 kicked off with a quick revision of the knots we learnt on the previous evening. We also discussed river signals before heading to the water to work on our rafting skills.

I wanted to now get the guides working as a team on the river using some basic river running principles. I found the CLAP model worked well for this workshop. 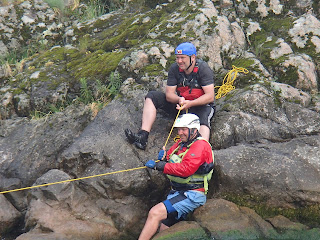 After lunch we got stuck into some throwbag work. We looked at various designs of throwbags along with the construction of a throwbag. I introduced the group the the cleanline principle then we were good to go.

We took the time to look at various belay options along with introducing thrower positioning.

Once the group were happy with the basics we moved on to some more advanced throwbag rescues such a “drop bagging” & double swimmer throws.

The next section to be looked at was throwing a coiled rope. We looked at the benefits of

I found it challenging to explain to the group that there was not one set way to re throw a rope, that in fact there were many different ways which also work for a variety of different people. The group also agreed with me when I mentioned that throw bagging should be practised lots.

The IRF throwbag test ended the afternoon session which all of the team passed confidently.

Our evening session continued with stepping up our rope work skills. We started off by looking at the following subjects

I had now managed to teach all of the foundation skills needed to build a mechanical advantage system which would follow on the morning of day 3.

Day 3 arrived and is affectionately know as “Wobbly Wednesday”. All of the candidates were a little tired after 2 testing days on the river. I decided to keep the team on the land for the morning so that we could spend the morning looking at pinned boats and mechanical advantage systems.

The Big 4 for unpinning a raft were practised:

I then introduced the group to building mechanical advantage systems with basic river equipment. We all built the following systems.
The group also found the T method for calculating MA quite useful. We ended the session with the standard IRF ropework test.

The afternoon session of day 3 was spent exploring true rescues mainly live bait rescues. A short session explaining to the group the mechanics of the chest harness function on their PFD’s led us perfectly into the practical side of their use. First we practised releasing the harness under a load then 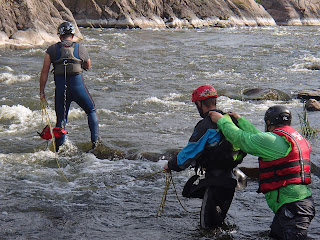 The morning of day 4 was spent looking at entrapments. We practised a selection of systems used to quickly rescue an entrapped customer. We all agreed that the best method was the down & dirty technique of getting hands on as quickly as possible. We also strongly agreed that river rescue is a team sport and should be practised, as a team.

We got a few funny looks from some of the other local rafting  companies practising all of this unneeded, strange, foreign, voodoo magic but we did not mind. 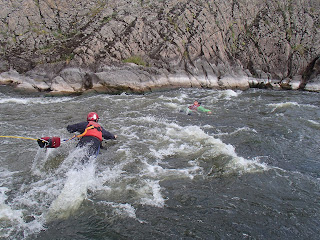 The trip leader scenarios were completed with ease and it was heart warming to watch the guys putting some new ways of thinking and skills to use.

The morning of day 5 started with flip drills before tackling the IRF written paper before final debriefs and goodbyes. The Ukraine now has its first IRF certified guides and trip leaders. It was a privilege to work with these guys. 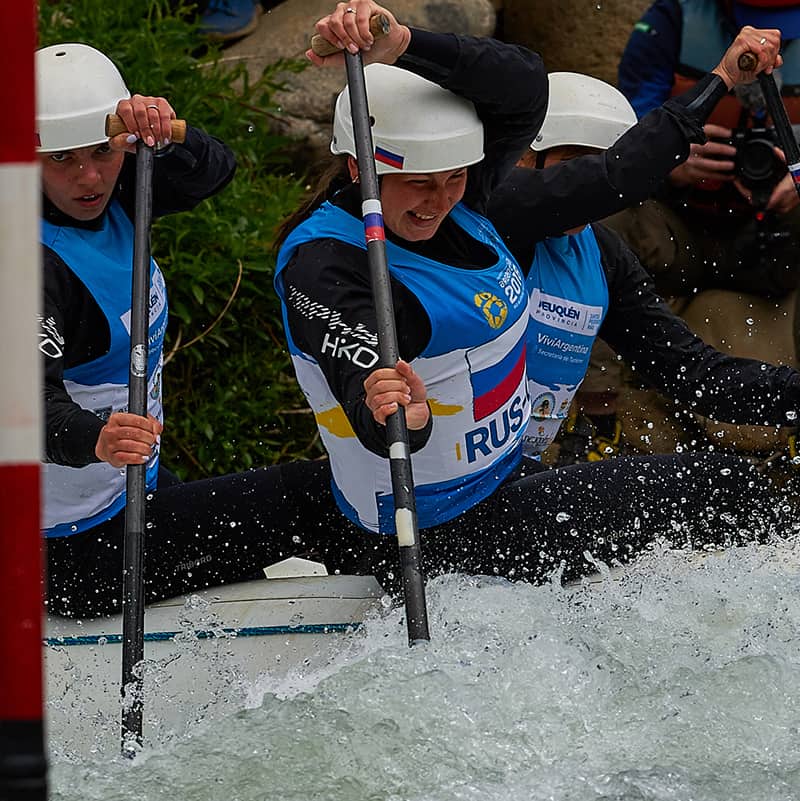 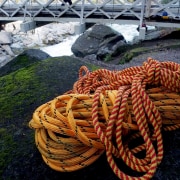 Are you carrying the correct emergency equipment? 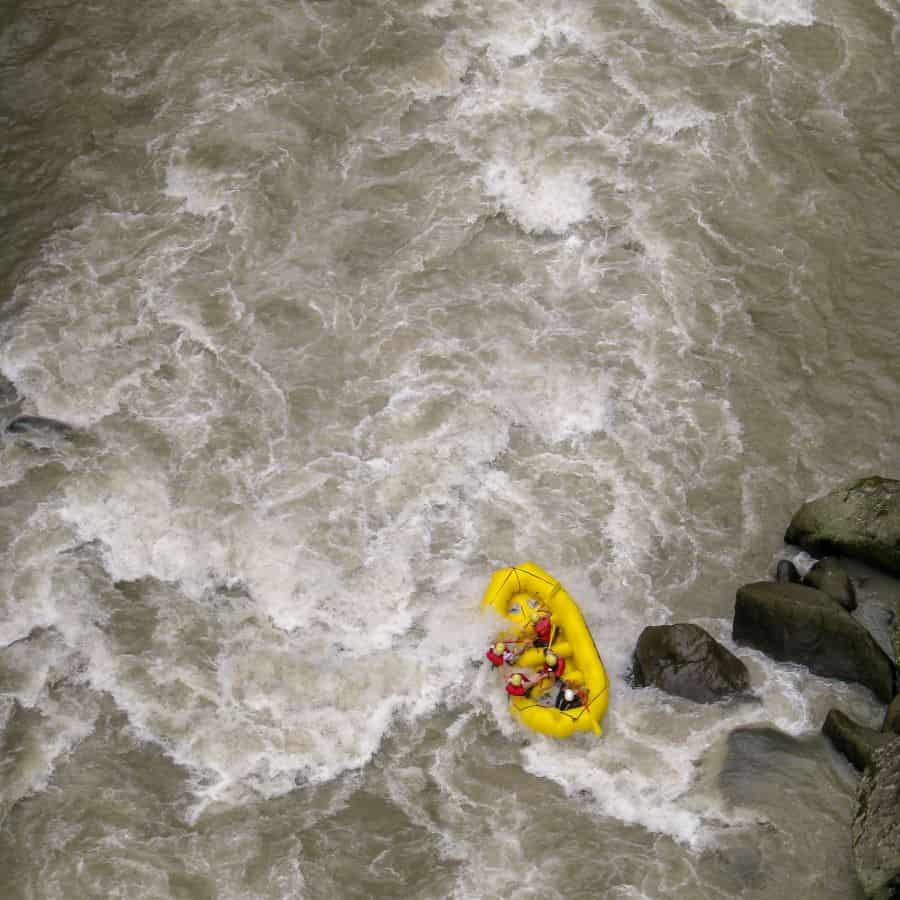 We’re all paddling a first descent with the Coronavirus

Ropes for River Use