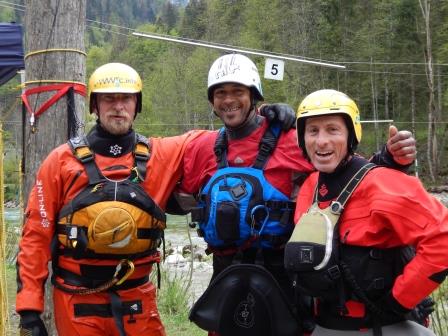 This is the first time we have had someone attending the Whitewater Rescue Challenge (WWRC) so as to report back to us from this fantastic competition. The location of the challenge is the same as the course for the EC R4 Wildalpen, and the organizers are Gaspar Goncz of Whitewater Training Center – WWTC, Neil Newton Taylor of Swiftwater Rescue and President of the Republic of Kayakistan, Bernard of River Sliders.

The WWRC is a challenge for our connoisseurs of whitewater rescue skills, particularly for instructors and various rescue groups and organizations. Testing one’s skills against others is a thing that many avoid, perhaps due to uncertainty. Those who participate are not there just to race against time and against each other, but to 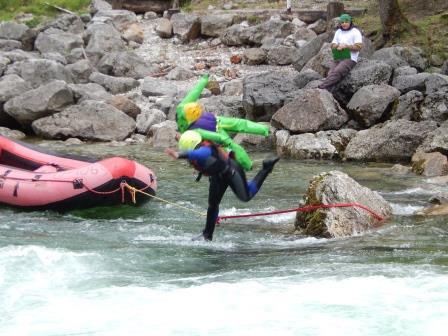 continue to learn. Mistakes made during the competition are harmless, and are a good reminder about some of the skills one needs to get working on because in a real situation it could be a big problem otherwise!

Day 1 – On Saturday, the first race was held. The weather changed during the night, the day was gloomy, rainy and quite cold. Cold weather and a cold Salza River are quite exhausting for competitors. The organizers made sure that this year the competition would be remembered for the toughest course so far. Participants came as individuals, not as part of a club as we are used to. Some of them are part of rescue teams, or instructors, or guides, etc, and so compete under their own names. So we had 28 competitors, of which 4 were women.

The course was composed of thirteen tasks. Here you can see them set out in the video and below the video is a description.

The competitors are set off individually and then timed from the first task to the final task. The first task was to (1) throw a throwbag to a “swimmer” in the water, a dummy. Then the same rope was used to (2) pull a stuck kayak up onto the bank. What immediately became apparent was that how contestants collected the rope back up was crucial; if they were in too much of a hurry and did not take care the rope tangled and became a big 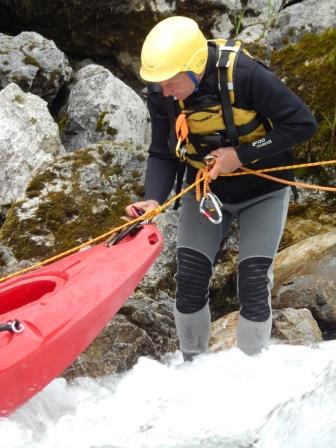 problem. The following four tasks: (3) turn over a kayaker, (4) lift a dummy up out of the water, (5) turn a dummy over (dummy is face down in the water, which was a task for many other dummies), (6) foot entrapment (hold the head above water for 10 seconds), the competitors had no problems. Swimming skills came to the fore here. It’s a very important skill if you want to participate here next year, because there is a lot of swimming. There was no chance for competitors to rest. Swimming continued into the next task (7) which consisted of releasing a dummy by cutting off a piece of rope with a knot. Here the problem was the knife, which for some competitors was quite blunt. No need to lecture on this subject, I already mentioned that mistakes during this competition are not terrible, just instructive. ;) Swimming continues in task (8) as you must cross the river to an eddy on river left to lift a dummy out the water and then task (9) swimming through the biggest rapid to a raft, climb into the raft and pull the dummy in as well. At this stage getting into the raft was not an easy task with bodies getting tired! After this, athletes go to the shore and then task (10) was swimming with the dummy across the river. The more tired you were the further the river carried you away from the desired point of exit, so that in addition to swimming, you had to carry the dummy back upstream on the bank to the next task which was (11) emptying a kayak of water, not easy. The next task was to me the most interesting: (12) using a zip-line to guide yourself and a dummy back across the river, and finally task (13) which was making a Clove hitch at the finish line with cold, tired fingers and brain!

Last on the start list but the first in the rankings, Martin Mitterer showed great skill and a speed on the course. Everyone joked that he picked out all the mistakes of the previous competitors and corrected them for his fantastic performance.  We were interested in who this guy is, so we asked him to give us a brief introduction: 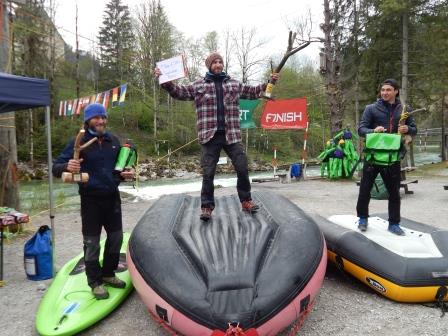 “I am a lifeguard and a member of the Austrian Water Rescue team since 2012.” – explained Martin – “There I learnt all the skills and techniques which are necessary to be able to take part in a water rescue competition. This year it was the first time that I took part in this competition and it was great, I’m sure to come back next year.

All in all I think I won the race thanks to a good mixture of water rescue techniques, endurance and of course – luck. Nevertheless I had to fight against myself not to stop for a short break.

My opinion is that everybody did a great job, nobody needed additional advice. The overall conditions were pretty hard, the water was much colder than I expected – a real challenge especially for the fingers. The only imperfection was the low water level. 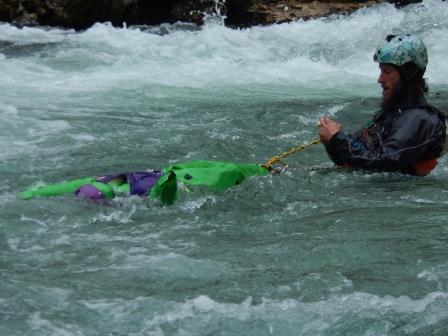 The tournament was perfectly organized, the food was great and the safety lessons were helpful, I recommend everyone to come next year and join us.” – Thanks Martin,congratulations on your victory and look forward to seeing you here next year.

The determination of these women was something that fascinated me. They took more than twice as long to complete the tasks in relation to the men’s winner, which means that they spent more than twice the amount of time in that cold water in such cold weather!!! Lol! No retreat, no surrender must have been their motto. Respect! 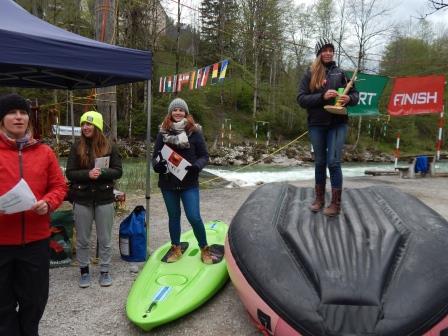 Among them was a young girl, only in age, in experience she is far ahead of her age. Only seventeen years old, Selina Rohe (GER), had an extraordinary technique of swimming through rapids and solving difficult tasks in the competition as well as admirable determination. We asked her how she ended up in this story.

“Friends invited me to join them so I did :-). “ – seys Selina – “You have to train hard and keep in mind to never ever give up. You need a lot of endurance, both physically and psychically. I’d definitely come back and do it again! I’ve never participated in something like that and the impressions were great! The competition was tough but so exciting and awesome! They want you to give everything and get out of your comfort zone.” – Yes, that sums up the competition. Hats off for this and to all the women who participated and completed the tasks to the end.

After this long, cold and tiring day some have decided to end it with a party at the Riversliders‘ house. 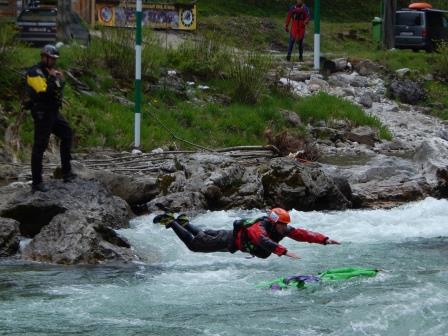 Links to photo and results:

That concludes the report for Day 1. Day 2 coming shortly.

A challenging but awesome slalom day on the Tully River