What a relief when the third day of competition started with sunshine. This third day was reserved for Slalom. The teams had the morning off as the Slalom was to be late afternoon/ evening under lights! So enough time to rest and prepare for this physically and technically difficult discipline. 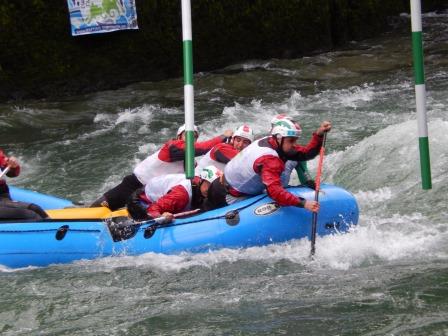 There were 14 gates, 6 upstream (three on the left and three on the right), a good zigzag race. The organizer were concerned the course needed power and so it was discussed as to whether it was too difficult for the Youth, and it turned out quite the opposite.

The biggest surprise was the overall success of the U19 and U23 teams. These young people used their heads and were far better in the penalty points compared to the Open teams. The top U19 and U23 teams only had -5, beaten only by CZE2 Open Men’s team 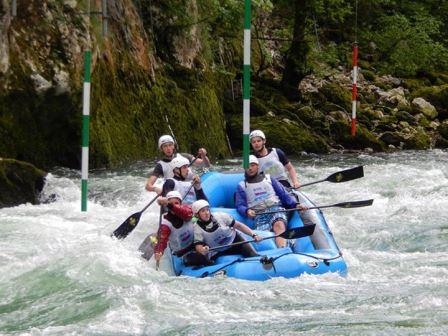 with 0. Excellent performance by the Youth! Great skill brought SVK gold in U19 and RUS1 in U23. CZE1 continued dominance in the Masters and ITA Open women were an unexpected gold – this team is showing great potential as a team to watch for the World Rafting Champs later this year. HUN Open Women’s team also did a great job, achieving second place. Finland Men’s Open were also a pleasant surprise, placing 5th. 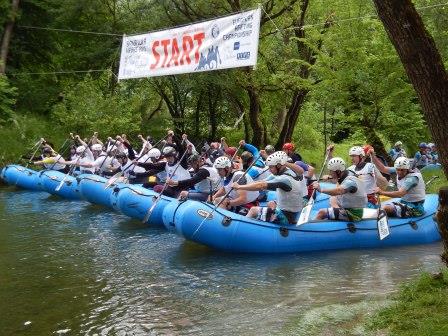 Generally though – the Open teams didn’t perform as well as expected! There is still time for them to work on that before the WRC in Indonesia.

After the night slalom there was a party at RC “Kanjon” but the teams did not stay for long because Downriver was the next day. The rain, sadly, began to fall again and did not really stop.

There are always protests during the competitions, so we asked Head Judge, Goran Lolic, what happens to the protest money from losing protests? “The protests gathered a total of 400 Euros. We have given this money to the Centre for Education, Tvoja Rijec, a voluntary social-humanitarian and non-profit organisation, based on humane principles that gathers people / children with autism and verbal disorders that cannot communicate well plus behavioural and learning problems.” – It is a great gesture and good to know it is going to a worthwhile cause. Thanks must also go to all the Judges who do this as volunteers and stand out in the rain, wind or sun all day.

Downriver started about 14km up river from the camp in Krupa. Thanks to the large number of rafts and good transport organisation it was quickly finished. The start was in groups, which made the race more interesting.

I walked a little way along the course and there met a little Russian girl whose mother was competing in the Master category (men’s group). Her angelic voice of support rang out: “Давай, мама, давай! (“Come on, Mom, come on!”)

Turkey won the U19 DR race and together with their win in the Sprint and their solid performances in the other disciplines this placed them 1st Overall.

The Slovenians proved to be the toughest in U23 and this, together with their Silver in Slalom, Gold in Sprint and Bronze in H2H gave them a well-deserved Gold overall.

The energy that Slovenia, Slovakia, Russia and Turkey are putting into their Youth teams is definitely producing results. Russia walked away with the Silver and Bronze in the U19 and U23 divisions. 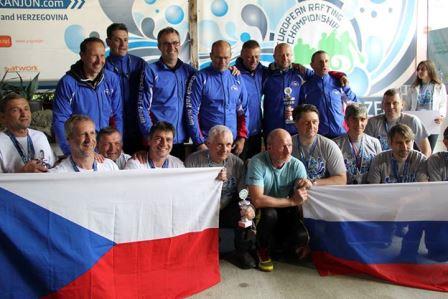 In the Masters division the Czechs continued to dominate with CZE1 taking gold and CZE2 Silver and that is how it was overall with RUS1 taking Bronze. GBR Masters took their favourite position of 4th again – they need to cancel that reservation for the next ERC :) 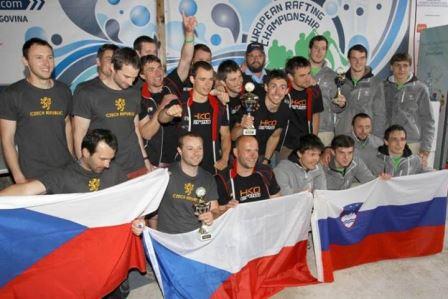 Another surprise of the competition was the BiH1 Open Men’s team taking Silver in the Downriver, giving them 4th place overall, using home ground knowledge to their advantage and feeding off the cheers of their local supporters which bodes well for a successful trip to the WRC this year. CZE1 took Gold overall by winning the DR and for their Silver in Slalom. Despite a Gold in Slalom and Sprint CZE2 could not clinch the points needed in the DR for first place and so settled for Silver Overall. Slovenia secured the overall bronze with their Silver in the Sprint and two bronzes in H2H and Slalom.

The Open women saw Russia take gold in the DR which together with Gold in the Sprint saw them take second overall. GBR1 took second in the DR which, when added to their silver in Sprint, gold in H2H and bronze in Slalom gave them overall Gold – a fine collection of medals! CZE took bronze in the DR but it was ITA who were to take third overall due to their gold performance in the Slalom.

We now have a solid insight into the strengths of the teams in Europe as we lead up to the World Rafting Champs in Indonesia. Any problems they see now will be repaired by the start of WRC competition. Also visible is the change of generations in Europe, many new faces and clubs. Most need time to mature for some great results and to reach the glory of the teams before them. I sincerely hope that we will still be able to watch all those old teams for many more years in the Masters category. 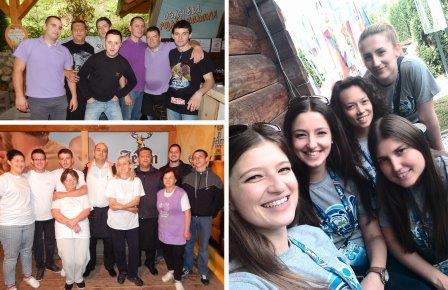 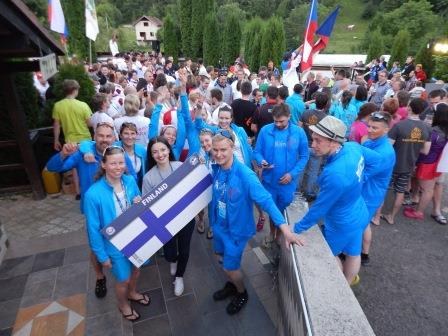 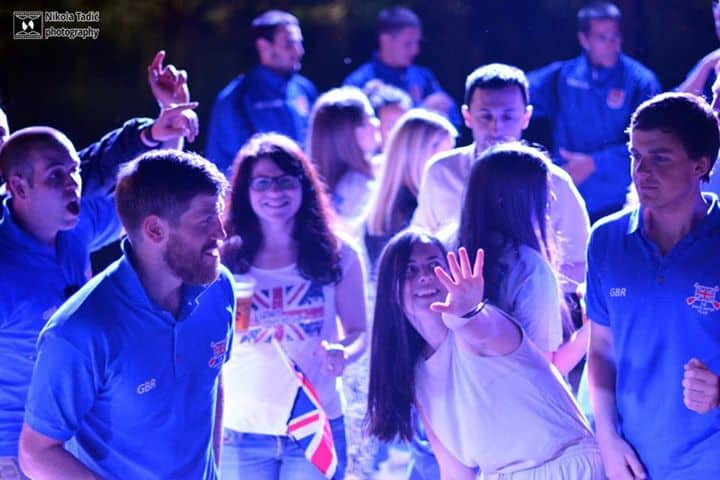 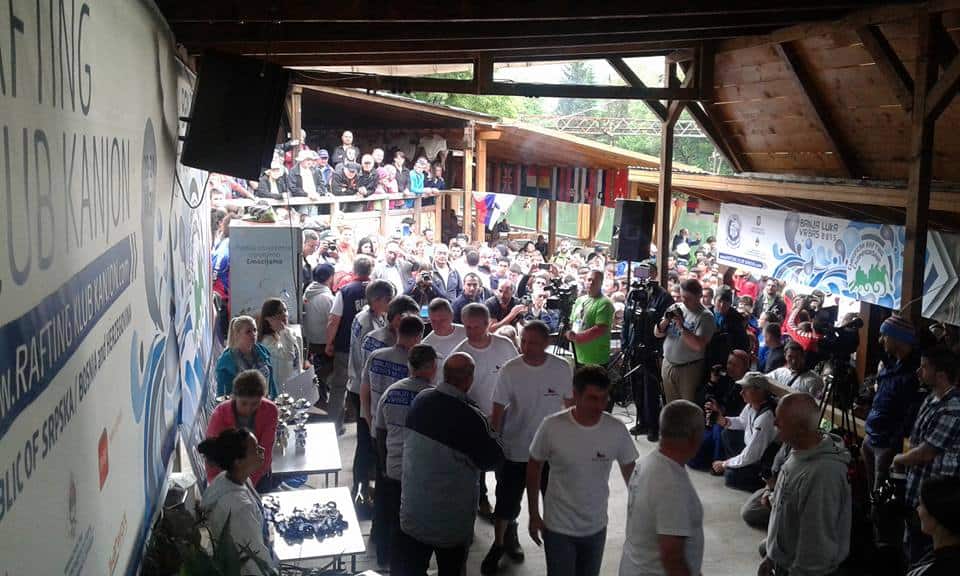