With the temperature around a hot and sweaty 40 degrees, the teams competed on the Itaipu Channel, Foz do Iguaçu, Paraná, in the H2H discipline of the R4 Rafting World Championship 2014 Open and Masters. Brazil took a clean sweep of old the gold medals on offer – Open Men, Open Women and Masters Men. 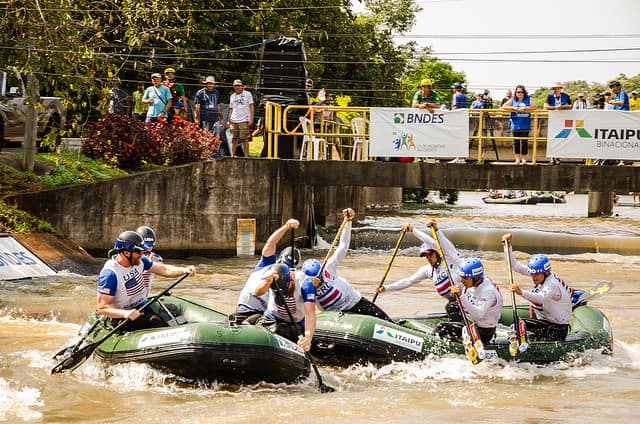 Fans and athletes took to the water today to get refreshed in the heat. There was also many flags from the delegations of Brazil, Japan, Russia and the United States hanging on the barriers as an incentive to athletes.

The final was an all-South American duel between Brazil and Argentina, with the Brazilian team getting out front and staying there to secure the Gold. The bronze went to the Czechs. According to Brazilian, Fábio Ramos, the rivalry in rafting with Argentina is not like football, but it’s good to win at home and give the victory to the Brazilian fans that support the athletes. “This channel is quite technical and any small mistake you pay with minutes and seconds. Each one gave their best to give this gift to the supporters, family and sponsors. We are in front, but tomorrow we have to be better than today so the last day we have no surprises” he said.

n the Open Women Brazil had another victory in the final, this time against the Japan who were leading the championship so far. The bronze in this event went to the team from Slovakia. “It’s a great feeling. Yesterday we were second and first today. We have two more tests to go and we know that the championship does not end here. Now we have to focus on the next evidence” said Graziela Soares from the Brazilian team.

In the Men’s Masters, Brazil also won gold in the final with the Czech Republic, and the bronze went to Russia. “Yesterday we got the silver and today we had the privilege of winning the Head to Head leaving the gold in the Brazilian territory,” celebrated Giovani Cáceres of the Brazil Masters team.

According to Giovani, rafting has been increasing a lot in Brazil, and is helped by being one of the great powers of the sport in the world who are always fighting for the title. “Our team is an example to others and it is very nice to be recognized for it and knowing that the sport is gaining prominence” he added.

Fight for the overall champion title

Tomorrow is Slalom, the most technically challenging disciplines of the sport.

PrevPreviousJapan, Slovakia and Czech Republic come out on top in the World Rafting Champs
NextPulley systemsNext