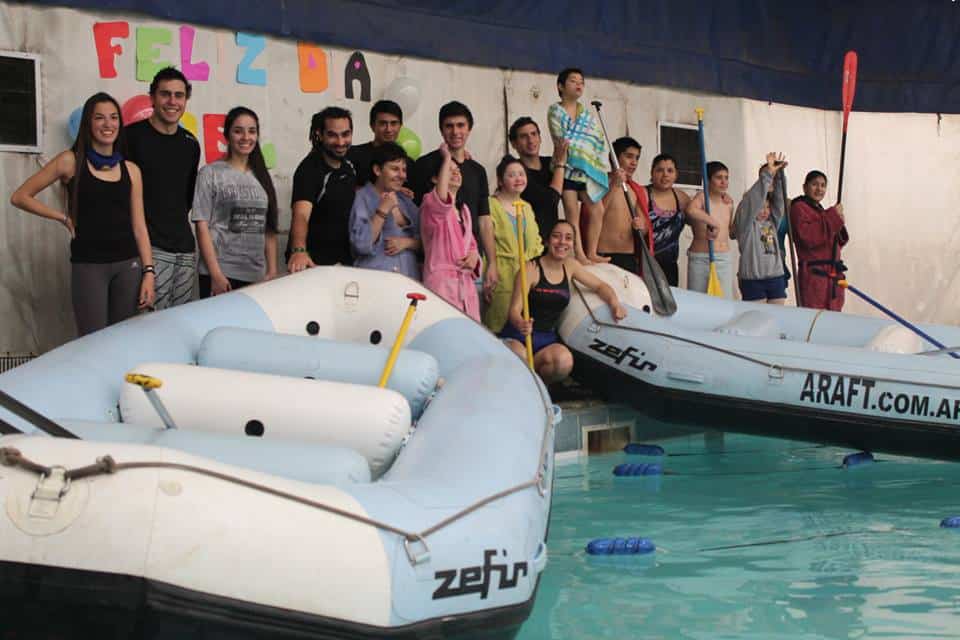 Argentina is one of the most beautiful countries in the world, with amazing natural areas, beautiful rivers and kind, hospitable people. From that country a young U19 men’s team will represent their country at the next “WRC R4” in Brazil.

I chatted to them and learned where their love of this sport was born and what great hearts these young people have. Maybe they will inspire you to do something similar.

“We are a group of young people that one day dreamt about creating a rafting team. Now we have won the National Championship in Argentina called “German Mateo” and so qualified to compete at the WRC Brazil. We have been training a lot.

We are all from a small town called “La Consulta” located in San Carlos, Mendoza, Argentina. Our initiation began on the river “Tunuyan” about 5 km from the town. We are all good friends, and college students.”

Who are the members of this team?

“We have a very good technical team. The first coach, is Dario “Pato” Pagano and the other physical trainers are Renzo “Chino” Martinez, Veronica Quilaquir and Rebeca Lorca. They guide us in training, and help us in all we need.”

How did you start in this sport?

“One day Joni (current captain) and I (Tomas Gomez) decided to create a Rafting Team. We were very young, only 15 years old and we didn’t have much knowledge of this sport. So we practised the sport as a recreational activity but now we want compete.

The only thing we were sure of is that we loved being in the rivers and that was to become our way of life. So, we formed a group from guys that think the same way. The first competition was fun and we learned a lot, we had some problems, as the raft overturned on our first slalom.

Over time, we were more convinced that what we wanted for our lives was Rafting. We are a nice family united by rivers.

How was your dream of going to the WRC born?

“In 2012 we met a Pato (Dario Pagano, our first coach). He was a paddler in a team that competed in the National Championship in Argentina. He saw our passion and determination and told us we had great potential and that we could become champions. That day, we began the dream of competing in the WRC R4 in Brazil.

How did you get to that goal?

“In early 2013 we scheduled all training to win The National Championship in Argentina, and get the pass to attend the WRC. Then once we knew we were champions we began the long and arduous task of preparing for the WRC.

Our coaching staff did a very intensive training program, in which we are currently in the final stage. At first it was very hard, but we have obtained high yields. We feel very good and eager to compete.

How have you navigated the expenses to get to the WRC?

“We did different activities – we did a party, had some government support and also solidarity activities like rowing with special kids.”

Tell me more about this, how the kids responded, and what advice would you give to those who want to do the same in their communities?

“The idea came to one of our coaches, Veronica Quilaquier, and we instantly accepted. The team worked with two teachers to do a course for kids from a special school. These kids have mental problems and have difficulty in making social activities. A team has to be built both physically and spiritually. This was a great experience that we will never forget and will do again. For three weekends we got together and made beautiful things with them, all related to sports and nature care.

Before the activity, we thought it would be very difficult to relate to them, but the time flowed incredibly easily. For them, this type of activity is very important. At first they were very shy and did not dare to do things, but then surprised everyone with the attitude they had after.The idea was to start in the pool and then move to a lake, and if possible the river.

I think we all have a duty to cooperate in all communities. There are many ways to do this. Sometimes something that does not mean a lot to us means everything to others. All you have to do is do it.”

That is so right. Your example and demonstration of working with these children is a great example for others to follow. Anyone who is interested in this, can contact you directly for details and assistance. Thank you for that.

Let’s return to Brazil for now. As a young team, what are your expectations at this competition?

“Well, we have many – we want to meet other teams from other countries and link up with and share experiences and enjoy the event. We particularly want to increase our knowledge and experience of this amazing sport. And about the competition – we feel sure that we can get a medal.”

Have you followed other raft races so as to get to know your competitors?

“Yes, we saw the last Euro Champs, and we think that there are very good teams in our category, anyone can win, all are very good – but we also feel that we can.”

Which discipline is your main asset in this competition?

“We are very strong in Sprint and Head to Head.”

Is there anything in particular you want to see or experience when you go to Brazil?

“We want to get to know the Downriver river as it is high volume and something we have little experience back in Argentina.”

I love the enthusiasm of these young people, as well as their initiative, it is inspiring. They show big hearts in all that they do. Their social activities are a great example to others to follow. I am delighted that these youths are the future of the world rafting community and part of the “IRF”.

They will have the honour of carrying their flag of their country on their chests at the forthcoming competition in Brazil. Above all else we wish they thoroughly enjoy their first big competition and we look forward to seeing them at many more. It was a pleasure to meet them. Good stroke guys and welcome to the world sports rafting scene. :)