Many of us first met Jim when he brought  his Canadian team over to race at the ‘95 to ’98 Camel White Water Challenge events and were consistent winners of the Team Spirit Award. So to many of us it is no surprise to hear that he has, once again, won a notable prize – this time, together with Michael McKay, its the Higgins & Langley Memorial Award for their R3 Rescue for River Runners video series. 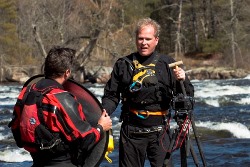 Mike and Jim at work

The award is the “Special Commendation Award”

“Rescue for River Runners” is an impressive educational video series that raises awareness within the recreational whitewater community about swiftwater rescue, including self-rescue, river hazards, and whitewater boating safety. Jim Coffey’s expertise as a swiftwater rescue instructor, and Michael McKay’s skill as a videographer, lend unique authenticity to each episode. The complete series is offered online, which ensures that river guides and paddlers worldwide have easy access to critical lifesaving information to help prevent deaths and injuries. – Higgins and Langley – awards 2013

The IRF has been featuring these videos in their safety articles on their website. This series is a great tool for IRF guide training Instructors and Assessors – the first comprehensive series of this type.

The awards have been running for 20 years now and are considered the highest honour in the Swiftwater Rescue community. They are presented during the National Association for Search and Rescue conference which was held on Friday, May 31st 2013 in South Carolina, USA.

The awards were established in 1993 by members of the Swiftwater Rescue Committee of the National Association for Search and Rescue (NASAR) in honor of Earl Higgins, a writer and filmmaker who lost his life in 1980 while rescuing a child who was swept down the flood-swollen Los Angeles River, and Jeffrey Langley, a Los Angeles County Fire Department firefighter-paramedic, who lost his life in a helicopter incident in 1993. – Higgins and Langley – Background

Jim is an active IRF Assessor training guides and instructors all over the world. We congratulate him on this award and look forward to his next ventures.