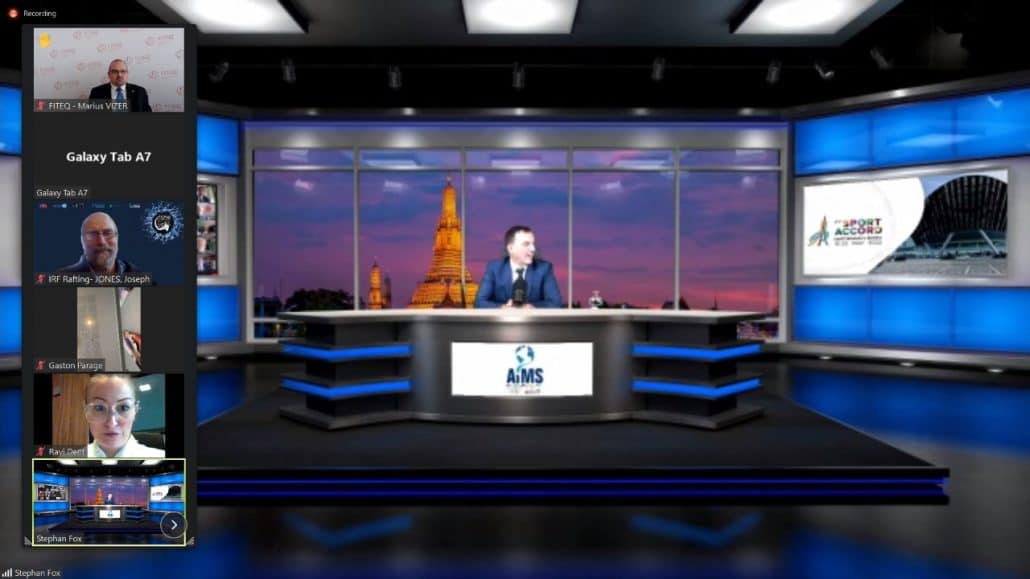 The IRF was recently invited to attend a number of international sporting body assemblies and forums. The first was the Virtual International Federation (IF) Forum which is a 1-day event organised by SportAccord offering targeted thematic sessions designed to be of specific value to the International Sport Federations’ in attendance. Representing the IRF were President Joseph Jones, Secretary-General Sue Liell-Cock and International Relations Chair Peter Micheler.  President Jones and Secretary General Liell-Cock were also honored to attend the General Assemblies of the Alliance of Independent recognised Members of Sport (AIMS) and the Global Association of International Sports Federations (GAISF).

More than 400 sports leaders from over 125 International Federations (IFs) gathered for the virtual, invitation-only IF Forum, under the theme of ‘Tokyo 2020 – Learnings and Take-Aways for the Future’.
“I truly believe that if we build on this togetherness and sense of community, sport will accelerate its development to emerge even stronger in the years ahead,” said Dr. Raffaele Chiulli, the President of SportAccord and GAISF, who provided the IF Forum’s welcome and closing addresses. 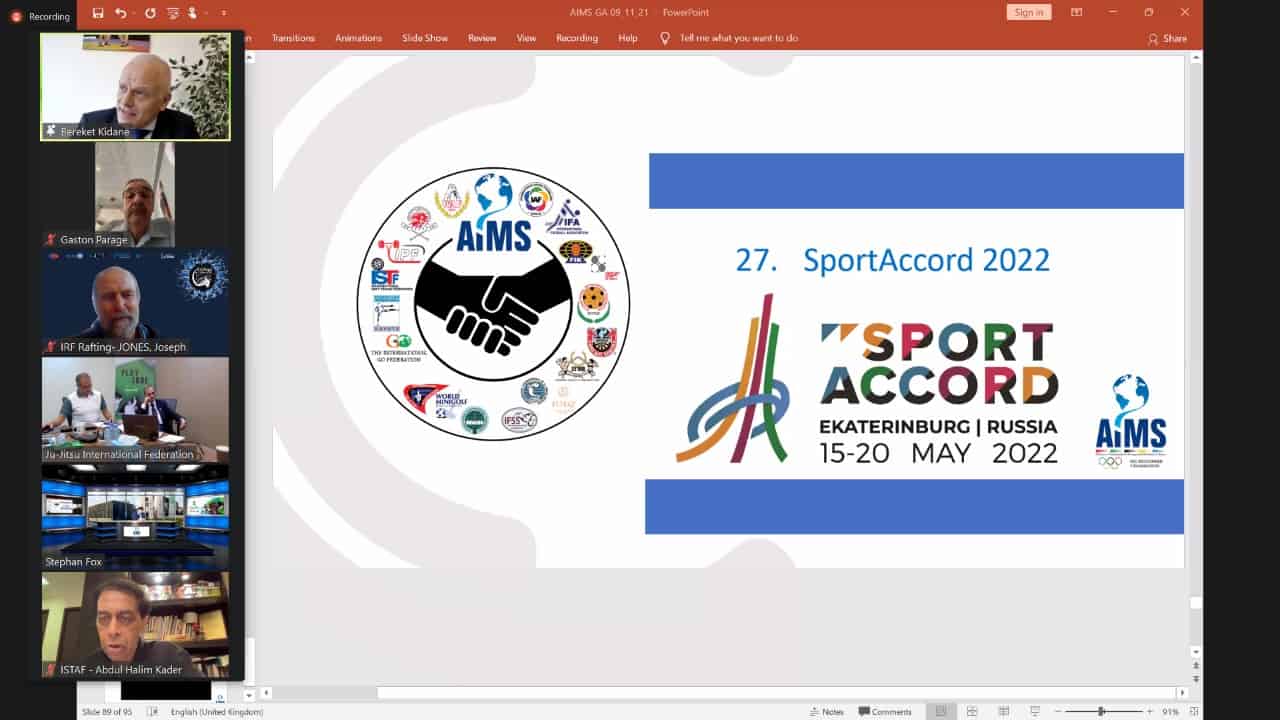 The AIMS General Assembly took place on the virtual platform with one main agenda point being the AIMS Council election from the period of 2021-2025. President Fox, who has been leading AIMS since 2015, made an extensive report highlighting on the achievements of AIMS over the last five years. AIMS has become a credible and respected member in the Olympic family receiving full IOC recognition as an IF umbrella body for sports striving towards Olympic recognition in 2020. Currently AIMS has 19 sporting international federations as full members, 9 associate members and 10 observers.

President Fox also talked about the observers programme where sports can become members of GAISF as well as AIMS, in order for the IFs to receive support towards GAISF recognition and becoming an AIMS member. President Fox was re-elected as AIMS President for the 2021 – 2025 period. The IRF looks forward to once again working with AIMS under his leadership. 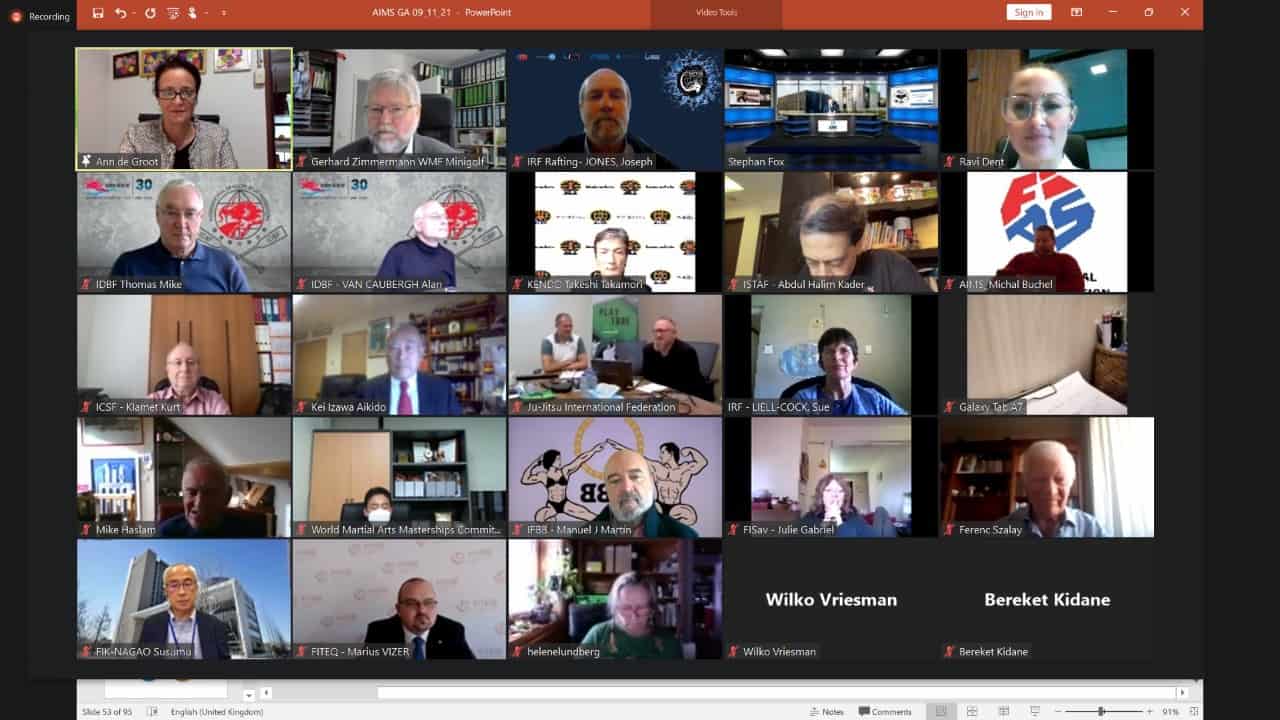 The GAISF General Assembly also held its Presidential election. GAISF Statutes require that the President of GAISF be elected on a 2 year rotational cycle from ARISF, AIOWF, AIMS and ASOIF. As required under the rotation, Ivo Ferriani was elected as its President for the next 2 year period,  after being nominated by the Association of International Olympic Winter Sports Federations (AIOWF).

Following Mr Ferriani’s election, outgoing President of GAISF, Dr. Raffaele Chiulli, said:
“My heartfelt congratulations go to Ivo Ferriani on his election as the new President of GAISF. I have no doubt he will continue to serve GAISF’s Members and all of sport to a high-level, and I can think of no better representative from the AIOWF family to lead GAISF for the next two years.”

The IRF thanks Dr. Chiulli for the assistance he has given the IRF over our past 2 years as Observers.

The GAISF family also welcomed one new full Member, the International Practical Shooting Confederation, and two new Associate Members, the Association of Pan American Sports Confederations and World Martial Arts Masterships Committee, which all had their applications approved by the voting members.

The IRF will also be embracing the virtual meeting world on the 23rd November when it’s first fully virtual Congress will be held.