Last weekend saw 24 teams competing at EC Trnávka. Nothing was going to prevent Czech rafters enjoying the last race on the Svaz vodáků České republiky’s (SVoCR) 2020 calendar, not even the damp weather. The event, held on the 26th September, was the Czech Republic Championship as well as an IRF Euro Cup Series event.

The races were held on the Trnávka artificial Slalom Course in Želiv, Czech Rep. This course is rated Class 4 and so is not intended for beginners. With travel restrictions in force for many people, the event only saw Czech teams entering the event.

The two disciplines raced were Sprint and Slalom. The rafts used were R4 Colorado, Pulsar 420.

The Open Men’s category saw Aleš Daneks’ team, TR HIKO, take the win in the Sprint over TRZUBR and PRSI Team Mladá Boleslav. TR HIKO also took the Slalom win in a time of 158.08, the fastest time of the day and conceding 5 sec in penalties. TRZUBR were very close behind with 162.71, only 4.63 behind. Raft club Hodonín beat PRSI Team Mladá Boleslav to take third.

TR Masters A took the Sprint win in the Masters Men’s category by 1.52 against Hájos Racing Team M, with Kaplice A veterán placing third. The Slalom saw a turn around, with the dominant and highly experienced TR Masters A having a bad second run, leaving them in an unexpected fourth place. Jan Vávra’s Hájos Racing Team Masters took first place with the only clean run of the day, in a time of 173.83, with MB Team second and Kaplice A veterán third.

In the U23 Men’s category LET-GUN Letohrad won the Sprint in a time of 135.41 with AC Rafting Team Bula 0.56 behind and TR HANACE juniors 11.53 behind. In the Slalom LET-GUN Letohrad definitely set themselves well above the other teams and had a very solid second run of 185.15 which included only 5 secs in penalties, clinching first place for them. AC Rafting Team Bula took second and TR HANACE third, RK Troja Junioři fourth.

And so EC Trnávka concluded the Czech 2020 season. A short, disrupted season which has left many hungry for the 2021 season to come soon. Watch our race events calendar for more events as they get added. 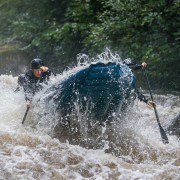 A fond farewell to Uncle Vláďa

Devil’s Stream pulls in the teams