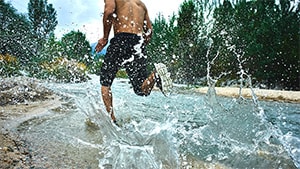 Olympic Day was introduced in 1948 to commemorate the birth of the modern Olympic Games on 23 June 1894 at the Sorbonne in Paris. The goal was to promote participation in sport across the globe regardless of age, gender or athletic ability.

The modern version of Olympic Day developed into much more than just a sports event. Based on the three pillars “move”, “learn” and “discover”, National Olympic Committees (NOCs) deploy sports, cultural and educational activities all around the world with hundreds of thousands of people – young and old – participating in sports activities, such as runs, exhibitions, music and educational seminars. Some countries have incorporated the event into the school curriculum and, in recent years, many NOCs have added concerts and exhibitions to the celebration.

Since the COVID-19 pandemic forced the world into lockdown and the postponement of the Olympic Games Tokyo 2020, close to 5,000 Olympians have engaged with a remarkable 243 million people online across more than 50 countries in the International Olympic Committee’s (IOC’s) #StayStrong, #StayActive, #StayHealthy campaign by sharing their daily workouts and uplifting tips on how to stay healthy in body and mind. Olympic Day 2020 will take this campaign to the next level.

Olympic Day 2020 will see Olympians, athletes and fans all over the globe get active in the world’s largest 24-hour digital Olympic workout. Twenty-three Olympic athletes have already joined the recording of an official Olympic Day workout video, and on Olympic Day, athletes from around the world will lead live workouts at 11 a.m. local time across 20 time zones on @olympics Instagram live.

The IRF is a strong supporter of the Olympic Movement and has several Olympians within our rafting family.  As we continue to pursue our dream to take rafting to the Olympic Games, we encourage our athletes to participate with the Olympic family and join in the fun with these workouts! Let’s all try and stay fit and healthy as during these difficult times, until we are once again able to get back outside and on the river again!