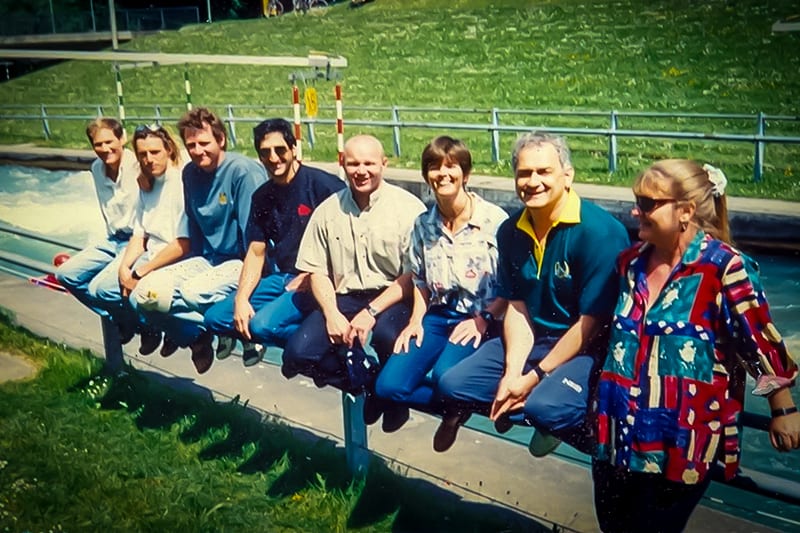 As we ready ourselves for our 17th IRF World Rafting Championship, we take a look back at what it took to create this global phenomenon which started 21 years ago and boasts membership from over 50 nations across six continents, runs inclusive worldwide raft race competitions several times each year and can lay claim to hundreds of thousands of clients being safely guided down the rivers of the world each year by IRF qualified raft guides.

Cast your mind back several decades to a time when the world was under threat of nuclear annihilation at the press of a button due to the cold war between the USA and Russia (then Soviet Union).  Jib Ellison,  a California whitewater river guide, was searching for a thesis project to complete his university political science degree.  Jib was aware of how rivers had the power to unite strangers, forcing them to work together as a team, and often creating lasting friendships long after the trip was over.  His vision was to create a project to put Russians and Americans literally in the same boat on a raging whitewater river where they needed to work together for mutual survival despite differences.  He mailed a letter (remember this was before email and social media existed!) to the Soviet government outlining his project and expected to receive no reply.  Thankfully, his idea got to the right person,  Mikhail ‘Misha’ Kolchevnikov, a pioneer rafter from Siberia and designated Russian Master of Sport. He and Jib set out to make it happen and from this was born Project RAFT (Russians and Americans For Teamwork).

The first activities included exchanges that brought a small group of Americans to raft in Siberia, and a group of Russians to raft in the USA.  Prior to this, little was known about the state of rafting in Russia due to the lack of communication from behind the Soviet ‘Iron Curtain’.  The Americans were not only amazed that the Russians rafted but that they did some really ballsy stuff on crazy Class 4 and 5 rivers in home made gear and sometimes in the strangest of home designed crafts! (bublik). The realisation that Russian rafters were like minded spirits created an immediate bond that would transcend language and other barriers and last for many years to come.

After these successful exchanges, Misha convinced the Soviet government to host over 50 rafting teams from 13 rafting nations around the world to participate in the 1989 ‘Chuya Rally’ an annual raft festival held on the Chuya River in the Altai region of Siberia.  This first-ever world rafting event was a life-changing experience for many of its participants,  forging friendships and opening contacts among rafters from around the world, the effects which still reverberates to this day (competing in this, and subsequent Project Raft events were persons that continued to be very active in rafting through the IRF, including former IRF President Rafael Gallo and current IRF President Joseph Jones).  From the Chuya event sprang the idea of an annual world rafting competition, each year hosted by a different nation. In 1990, Project Raft brought the world raft competition to the Nantahala and Nolichucky Rivers in North Carolina, USA, in 1991 the Reventazon River in Costa Rica, and in 1992 the Coruh River in Turkey.

In 1990 after Project RAFT started, the J&B European Rafting Champs were created and held each year until 1994.  These races were televised on Eurosport which brought raft racing to the public’s attention in Europe.

Same lifetime but a large continent away, a fun rafting festival was growing rapidly down on the Zambezi River. South African, Tony Hansen, had been appointed as Event Director and was taking it to new heights. He attended Project RAFT’s event in Turkey with the aim of bringing the next international race to the Zambezi.  With the collapse of the Soviet Union, Project RAFT closed down before the Zambezi event,  so Tony sought out new sponsors which he found with the RJ Reynolds Tobacco Company (Camel cigarettes).  He re-designed the event to have a raft time trial, head to head, slalom, downriver and a kayak downriver as well as a fun rodeo. The teams were then invited and subsidised by Camel and from this the first Camel White Water Challenge (CWWC) events were born. The first three events were held on the mighty Zambezi and averaged between 20 and 30 teams from all over the world. The draw of the Zambezi churned up the interest world wide. Camel ensured the entire event was filmed and photographed by the best and the wild footage of the extreme rafting and kayaking on the Zambezi was impressive and attractive to all river lovers. Camel then took the event to other exotic locations like Costa Rica, Augrabies Falls in South Africa and the Futaleufu River in Chile. Despite the growing attraction, international pressure against cigarette advertising forced Camel to run its last event on the Zambezi in 2001.

During these CWWC events rafters from all parts of rafting – racing, touring, commercial, safety, were all hanging out together and forming long lasting friendships. In these discussions there was an agreed notion that there was a requirement for international standards for all of these activities. They could see the need for an organisation to represent all these walks of rafting.

The rapid growth in numbers of teams wanting to compete in CWWC and for the event to be given World Championship status; together with the need for profession river guides to have an international organisation to represent them spelt out a demand for a formal organisation.  This was brought to a head during a so-called World Championship held in Italy where unclear rules and event disorganisation left many feeling it was time to take this final step forward.  Rafael Gallo and Lee Porter started the movement, and were soon joined by Peter Micheler who represented a strong voice in the European competitive world of rafting. Tony Hansen and Sue Liell-Cock were their first recruits.

And so in May 1997 a group of people met in Augsburg, Germany, to formulate the basis of an organisation that could represent the rafters of the world. A Declaration was written, Statutes and By-Laws were created and an Initial Board of Directors and Executive Committee was set up. The purpose of the International Rafting Federation was to unify rafting communities and all aspects of rafting from around the world.

Moving the writing of by-laws outside

To this day, one of the key objectives the IRF strives to maintain at its events is the camaraderie that was born with Project RAFT. Gathering people from all parts of the world who have the same love of rafting to offer a unique platform for building friendships that will last a very long time. These friendships transcend borders, politics and cultures just as Jib and Misha envisioned, and as the rafters at these events continue in life many of them will look back and remember how much these events changed their lives.

The IRF has grown since those days. We have welcomed new member federations, developed and continue to improve our Guide Training & Education scheme and respect the values and camaraderie that has developed over the decades to get us to where we are today – the globally recognised facilitator of all things rafting across the world.

And with this in mind, we look forward to the next decades of rafting across the globe, welcoming friends new and old to our rafting family and wish all our teams competing in next months IRF World Rafting Championship, the best of luck.