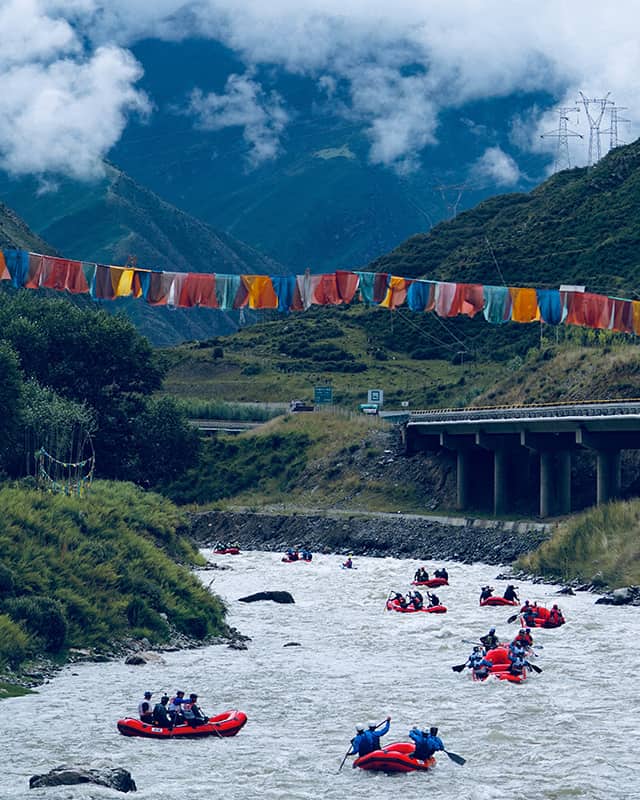 Raft racing on the Tibetan Plateau, has additional challenges for competitors.

The city of Yushu has just played host to the IRF Yushu 2018 World Rafting Plateau Championship which saw 23 teams from 17 countries from four continents gather together to race with friends old and new in stunning and breathtaking race environments.

At 3,600 metres above sea level, the city of Yushu is well above the altitude of home towns for most competitors. Altitude sickness (hypoxia) can pose problems as your body adjusts. It can take two to three days especially for those who are more used to living at less than 100 metres above sea level. Thankfully the city and event organisers are well prepared for this and recommend a few days prior to the competition to acclimatise. This involves rest, eating, sleeping and if needed medication and oxygen “pillows”.

Yushu is well and truly on the Tibetan Plateau. Weather during the competition ranged from blistering sunshine to torrential rain to calm breezes and rolling clouds. Sprint and Head-to-Head experienced a welcoming morning to ease everyone into the day and was marked by heavy rains to ensure everyone was alert for the quarter finals of the head-to-head.

The Yushu 2018 World Cup set out to show that the local peoples care about the rivers as much as they care about the environment. Yushu is home to the birthplace of the three great rivers of Asia (Yangtze, Yellow and Lancang). The day of the opening ceremony, teams split up and worked together with 40 school children on a river clean up exercise. We rafted in teams of three or four competitors and four or five school children stopping along the way to collect rubbish. We collected over a dozen car and truck tyres along with other items people have discarded into the river. The children had a great time with this being their first ever river and/or rafting experience for all of them.

The Yushu 2018 World Cup Opening Ceremony was a dazzling spectacular in King Gesar Square attended by all competitors, officials and thousands of local residents. Fireworks, a light show, dancing and singing performances entertained the crowds until a torrential downpour stopped the event. Running for cover, most people managed to keep some part of themselves dry but not much. The performance pieces were completed the following evening.

Sprint was a long but exciting section starting with Grade 2 and stepping up to Grade 3+ for most of the Sprint before easing back to Grade 2 for the finish line. The curious site of several hundred people kitted out for rafting brought out many locals vying for the best viewing places. 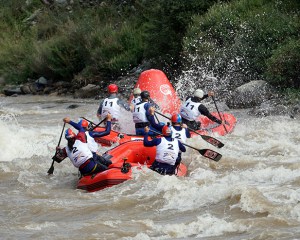 The new format head-to-head had its rules stretched to the limit. Boats started facing upstream, lane choice meant river left was favoured for the speed off the start line but certainly did not guarantee a win. Gate 1 (river right) was favoured in the first few races but then teams really started utilising their options. Gate 2 (river left immediately down from Gate 1) was the location for many battles with a few changes to race leadership. All who opted for Gate 2 successfully navigated it.

Seeking to show utilise their tactics, Czech Republic demonstrated fluent and dominating control of the H2H rules, slowing on their approach to Gate 2 in an attempt to prevent their opponents using the same gate. The tactics worked well, with Czech pushing Japan to the back of the eddy and powering themselves up and around the gate. However, the tables turned for them on Gate 3 when in spite of Czech being first into the eddy, Japan were able to push them to the shallows of the eddy and push through to win their semi final.

Interpretation of the rules came into play as New Zealand used boat to boat contact to force their way up and around Gate 3, forcing Chile to concede the Gate but as there was no rule against the move, it was permitted. Much discussion was had following the race and teams informed it was legal according to race rules but if they still feel strongly about it, they can submit race rule changes as normal (see here for how to submit race rule changes).

Slalom was the following day on the same stretch but slightly shorter. With four upstreams and two big bends in the river section, it pushed team’s knowledge and skills of slalom. Gates 5, 7 and 8 proved the most challenging. Gate 5 was a midstream up gate and needed to be attacked high in order to avoid being pushed to the back of the eddy or downstream. First runs saw most teams approach from river left (the fastest flowing water) with varying degrees of success. For second runs all but those teams with very powerful forward paddling, approaches from the slower water river right.

Upstream river left Gate 7 was a challenging gate for all teams. The approach needed to be slow and controlled yet powerful to avoid getting washed to the back of the eddy, over rocks into the eddy below. Some teams opted to hit the eddy hard and use their right side paddlers to jump out and pull the boat forward to avoid getting swept down. Others chose to approach wide and slow aiming for the top of the eddy but avoiding the shallow submerged rock (or risk bouncing off and downstream).

Gate 8 was an upstream river right eddy. If teams navigated gate 7 successfully, they could ferry over and use the creating wave to push them into the top of the eddy. The levels of slalom skills played heavily on this gate. The stronger more experienced teams navigated the eddy above the gate and then moved their paddlers in the boat to navigate the gate. Others dropped down the eddy and pushed hard up the eddy in a standard gate navigation.

Downriver got off to a cold start with snow having fallen on the hills overnight. Competitors set off in a sailing start in three pods. The first pod was one of the best demonstrations of a group downriver sailing start with contact between most boats and a lead pack that stuck close together almost the entire length. Home team China 1 took second place at the start and carried this almost to the end where they were overtaken by Chile and Japan. 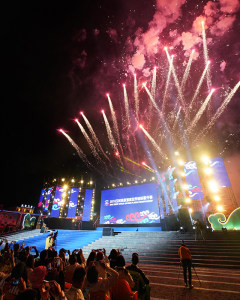 The women’s downriver started with fierce competition. The first three teams (New Zealand, Costa Rica & Russia) locking into battle long before the start line. Unfortunately, the teams were so focussed on the fight the three of them crossed the start line too early and were each awarded 50 seconds penalty. This meant that despite having the quickest time, New Zealand came second due to their penalty and Czech came away with Gold. Special mention goes to the Aussie and British women’s teams who were locked in a jostle almost the entire race with less than a second defining their final positions.

Yushu was a welcoming city and hopes to host us again soon. The peoples, culture and history is rich and envelopes you from the moment of arrival to the time of departure. The IRF and Yushu local organisers look forward to welcoming teams again from across the globe for a truly international rafting competition.