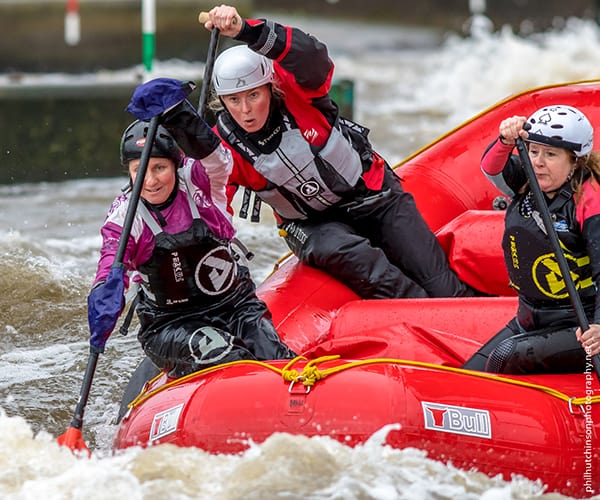 What’s the point in promoting women in paddlesports?

Women have been raft racing since Project Raft on the Chuya River, Siberia, in 1989. The Amazonkis Team from the USA were the first to pave the way and show how it’s done. Women in rafting have come a long way since our very own IRF Secretary General was told by a well known paddler at a Zambezi Rafting Festival in 1992 that their women’s team (the only one there) were taking on more than they could handle and would end up being helicoptered out. Instead they placed 16th out of 32 teams! There are women’s teams from most countries competing in IRF competitions now. So what’s the point in hosting an event named after and in aid of women in paddlesports? Surely they don’t need their own event!

In the UK we are now very fortunate to have a strong contingent of women’s raft race teams – and a growing pool of female raft guides around the country. Unfortunately, outside of the rafting and paddlesports domains, the teams and guides aren’t widely recognised or supported. It’s been an uphill movement from when we had only one or two women’s race teams – today we are proud to be able to say we have seven competitive women’s raft teams across the age categories and across the country. We are looking forward to some brilliant competition at our national selection event in February (which is open to teams from other countries to compete in!) and throughout the 2018 race calendar year.

Seven may sound like a large number of teams but when you consider the wider field of paddlesports in the UK, it’s not a large number. Our aim with hosting an International Women’s Day Raft Race is to encourage raft teams to compete and showcase the best female paddlesports athletes from across the UK, Europe and the World. We want to raise the profile of women in paddlesports and encourage more women to get involved in rafting and other paddlesports disciplines.

Over the weekend we will be holding Freestyle Kayaking and BoaterX events. There will also be a “Have-A-Go” Rafting experience for those who haven’t been on water or in a raft before. We want to show that women of all ages, from all walks of life and with many balancing priorities in life including work, education, families and friends are able to get out there and have fun and get/stay fit.

We want friends old and new to come together and inspire others to get involved in rafting and paddlesports. The whole event is open to both men and women – women’s raft teams will compete in the relevant age categories – men’s raft teams will all compete in a single open category. Freestyle and BoaterX will be open categories. We have some great sponsors with pretty amazing prizes up for grabs.

Team tickets include snacks on Saturday and Sunday, evening meal Saturday night, guest speaker, prizes and team entry for all raft races.
Limited spaces at the local youth hostel are also available – grab these before they all go!

We want you to get involved – #AreYouReady? If the answer is yes…..