News
You are here: Home1 / News2 / Racing3 / Big thank you to David and Georgia

One more Euro Rafting Champ competition is behind us, Georgia has become part of our history now and it’s time for us 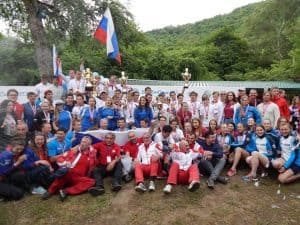 to gather impressions, mention some important details and say thank you to everyone who helped to organise it.

From the 22 to 28 May in Borjomi, on the River Mtkvari, 44 teams from 11 countries flew their flags in this competition and defended the colours of their country in the U19, U23, Open and Masters categories. The wide and fast Mtkvari River was a challenge for the competitors, especially those who mostly train on artificial canals. The river varied from very high in the beginning of the event, to exactly the water level it should be by the end of the event. The weather was changeable, and the sun, clouds and rain alternated during the days. 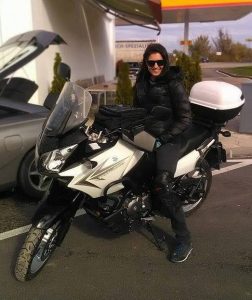 Most of the people arrived by plane to Georgia, but one judge Ms. Jordanka Bogdanova, rode her motorbike from Sofia to Borjomi, more than 2000 km in one direction. We also had the opportunity to have the two judges from other continents: Eric Boudreau, from Canada, and Daigo – Dingo Shibata, from Japan, and the presence of the President of the IRF , Joe W. Jones. Our dear Emilia Begunova came with her baby in the camping car to Georgia. Nice to see how our rafting family every year becomes more numerous.

Downriver training day for the Open Women category was the most interesting. During the descent at a place called Sokratich, there was a very interesting wave on the left side of the river, which first knocked the Danish women’s team over, then the Safety team intentionally flipped on it (to allow Nada to test out her new suit :D ), and finally the GBR 2 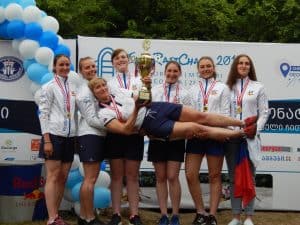 OW team. It was swimmers on all sides, and a good test for those with GT&E certificates, which Lilliand of Denmark OW passed in Morocco – she climbed up onto the raft and re-flipped. Way to go, girl!!! Great self-rescue skills!

What was also very interesting and commendable throughout the competition was the Slalom skills of U19 Women: ITA1 and CZE1. Also the excellent performance of all the Russian teams. Here I 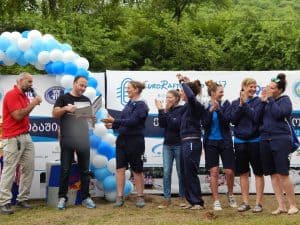 will mention that the team, which competed in the U23W was the same one competing in the OW, only in this category one place goes to mom Katerina Kozhanova, who with her daughter, Valentina, won the Overall OW and Valentina also won Overall in U23W. The Czechs are still superior in the Master’s Men category. Although ITA OW team didn’t win a medal they did win a 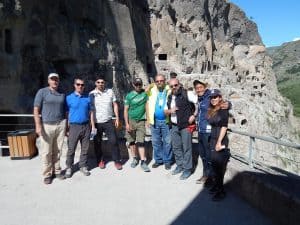 great prize from the main sponsors “Georgian Wilderness Expedition”, a seven days tour through the Georgia for seven people within the next year. Fantastic!!

We were not able to resist the wonders and beauty of Georgia and I am delighted with the trip that the judges and I managed to do on our off afternoon, visiting Cave Town –

Vardzia, a place that many athletes also chose to visit, and at the end the Mtskheta, Tblisi… The main sponsor of the ERC – “Georgian Wilderness Expedition” were also in charge of our transport during the competition. The owner, Vasili Melkadze, and his team were always available, which was fantastic and greatly facilitated our work. Thank you for everything.

When a competition’s safety is good and properly run it is a real pleasure, and we are grateful for our Safety Team, led 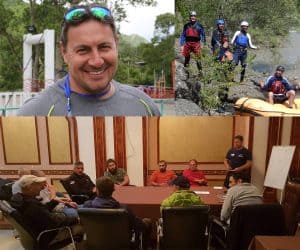 by Mihai Mares, that worked hard to make us safe. Thanks as well to all judges once again for their fantastic job.

We also had the honour of the Minister of Sports visiting us during the competition, because this Ministry has been a major supporter of the competition.

In the end it is time to say thank you to our dear organisers of the ERC competition: David Katsarava, Makho Tavadze and Sofia Khachapuridze, who were a fantastic trio. With all their assistants

was such a pleasure to work with. Thank you from the heart for everything. We had an unforgettable experience and we’ll come again. And thank you Sue for behind the scenes support, making an easy to find location for all the results, pictures, videos, press releases, etc …

Once again, ERC has given us fantastic memories. Until the next one, stay safe and enjoy the river.

Thanks to all sponsors:

Judges needed for ERC 2019, and Judge course to be run as well