The first day of the event was for registration and orientation so the teams divided into those who went on a tour of landmarks around Borjomi and those who went to the water to train.

There were 41 teams registered – 25 Open Men, 10 Open Women and 6 Masters Men, from eleven countries: Georgia (as host), Czech Republic, Latvia, Russia, Kazakhstan, Romania, Turkey, Ukraine, France, Serbia and Slovakia. That’s a good numbers of teams! The fact that it is the first time a EC event is being held in Georgia and that the winners would get prize money attracted a large number of competitors, especially from Eastern Europe as the competition was so close. A lot of new faces in this contest.

Day two was the training day and teams divided into two groups, starting with Downriver and then Sprint and Slalom. At the start of the Downriver there was a group of twenty boats on the water, a sight to be remembered. Fiesta!!! Even though there were 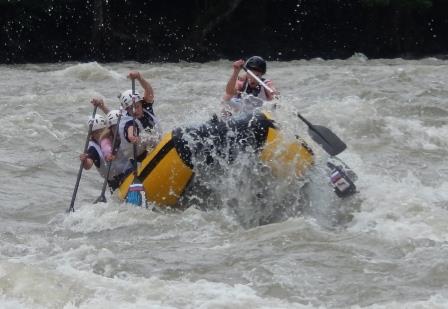 safety boats, the teams kept a good eye on each other – fantastic! And everyone had great fun.  The river had dropped over the previous days, so the Downriver was a real pleasure.

The river was very fast, so the 9km planned for Downriver passed in no time. There were 3 places that provided easy locations to pass (since the water dropped), and places that made a lot of problems during the unofficial training. The river is dynamic along the whole course, 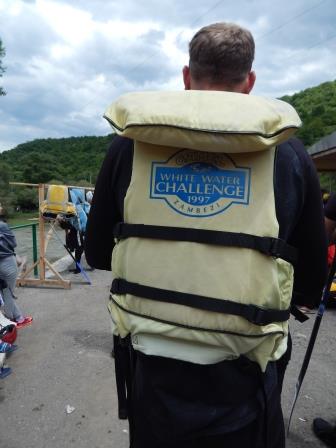 and the wave trains were very enjoyable. Of course, tomorrow the contestants will avoid them because they slow the boat down, but today everything was allowed – to feed our souls!

What particularly attracted my attention is the lifejacket from the CWWC 1997 Zambezi. I’ve never seen them before in competitions and it totally fascinated me.

In the evening we had an opening ceremony at the hotel because the rain spoiled plans to open in the centre of Borjomi. Organiser, David Katsarava, thanked everyone for their participation, then we saw singers of traditional music and folk dances and each country presented  as part of the opening and it was excellent.

The Downriver Race was another fantastic day on the Mtkvari River, Borjomi, Georgia, and it went without problems, just a few punctured rafts, but not a big problem for the organiser. The weather was beautiful during the competition, which certainly meant a lot to the competitors. 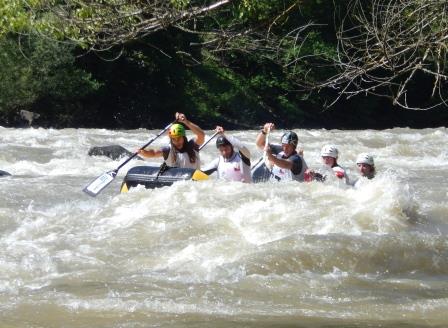 The top three positions in the Downriver were:

The dominance of the Czech Republic was no surprise. 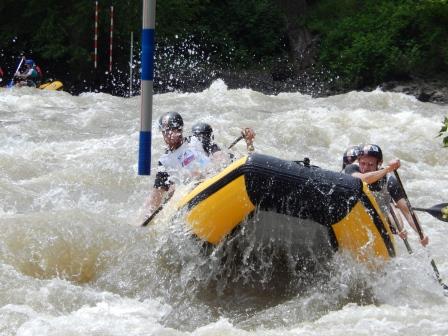 Slalom was very interesting because the river is wide and rafters go from bank to bank catching gates, but with such a fast river it was not so easily excecuted, so there were a few people falling out of the rafts and two flips. It was raining like crazy at first, then the sun came out to warm the competitors and then again the rain, typical of this climate. The Judges were more afflicted by the rain than the competitors. A judges training course was run during the event so as to grow the number of judges that we can see at future events

The Masters Men’s time was the top time out of all the teams that competed. And 14 teams only received “0” or “5”, which is a fantastic percentage and is rarely seen in competitions, but the difference came in the time it took them to run the course and that dictated the podium. 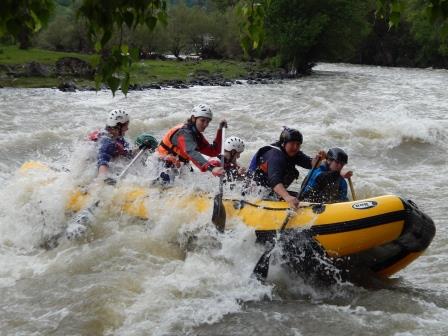 Sprint was a real tussle in time, so the first six teams were tucked into one second difference. Differences in hundredths of a second were deciding this. Fascinating! Here we saw a great result from the team, “Georgia-Nakrebi” and Turkey “Caykur”. Russia continued to dominate the Open Women. 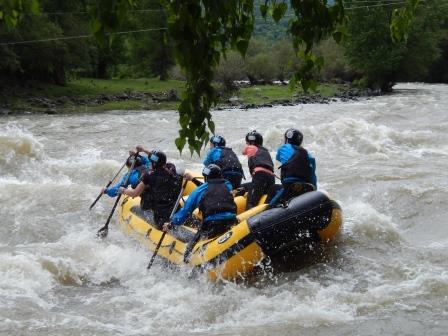 Last discipline of the day and competition was H2H.

This day was very well organised and so the day ended even earlier than planned. With so much Czech domination to me it seemed like a mini Czech national competition. Georgian team, Nakrebi, did well with their 5th place, as well as “Legion” from Kazakhstan with their 8th place.

Photo album of H2H and Sprint

When the awarding of medals and cash prizes to the winners was completed, we then had a party that lasted more than 6 hours, that is, until they closed the bar. :D  The wine sponsor made this competition even better. ;)

If you thought that this competition was well organised, wait until you see it next year, because, according to rumours circulating around, it will be even crazier. Since it was the first of its kind in Georgia, everything was more than perfect. Thanks to all the sponsors, volunteers, judges and everyone who worked on this competition. One team expressed special wishes to thank the organisers:

RT Pustolov: “At the closing ceremony of the Euro Cup Georgia 2016, our host, Mr. David Katsarava, said that it was the first time for them to organise such an event and they will try to make it better next time. But, from our point of view, it can not be better and we want to thank him and his team for the hospitality and perfect organisation of our stay in Georgia for five great days with all the wonderful people from all over the world. Because of them and the amazing nature and waters of Georgia we will be sure to come again.”

We would like to thank those who have helped to make this competition happen: