It’s so good to be back on the river Struma again. My first impression and my first serious swim was great, back in 2008. Now the river Struma is even faster than before due to higher water. I’ve enjoyed my ride again and was not disappointed, it’s been even better.

Big water and high speeds were an excellent challenge this year for the rafters. The weather is variable were there are all four seasons. It’s been mostly winter like weather here. EC R6 Struma this year brought together teams from Hungary, Romania, Serbia and Bulgaria. Hosting a total of 10 teams, of which 7 are male teams and 3 are female teams. In addition to the Euro Cup this is also the national competition in Bulgaria.​ We could see the contestants father and daughter of the Romanian team – Mares families, as well as the father, the son and daughter of the Bulgarian team – family​ ​Paunovski​, so that makes this sport even more beautiful.​​ 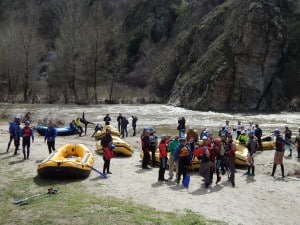 Training on Friday was great, but quite cold. Since we were well warmed up on Saturday, the gates were set and Slalom could begin. With very fast water and demanding gates (only 3 upstream gates!), this brought a lot of negative points to teams. From gate number 3, which was on the right bank, teams were supposed to pass through on the left side of gate 4 (green), to the other upstream gate number 5.  It was the first place where teams were losing the rhythm of the gates. As a final challenge at gate number 9 (green), they were supposed to catch after leaving gate number 7 (upstream) through 8 (green), on a big wave made by an even bigger rock. Not many teams succeeded in this. 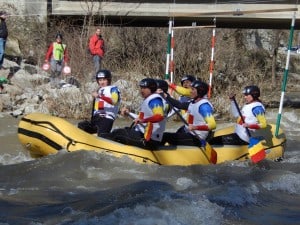 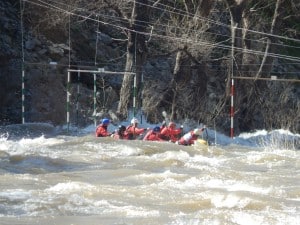 The final standings in this event looks like this:

We know how the river curves and where river currents are going and in this case, the river was curving on the right. According to the rules, it should be the fastest part of the river, but no. This was that part of the river because of the vortices that made it slower than the left side. Teams started at this point for H2H. The teams that chose the right became stuck in the eddies. It fooled many teams and they lost the race.

This is best demonstrated by “Respect” in the men’s category, followed by those “Liman”, while in third place “Reflip2”. In women, the order was as follows: 1. “Adventure Net”, 2. “Reflip”, 3. “Rafting ladies”.

​​Wildalpen is where it maintains Euro-cup R4, Austria, and which is known for its party. Partying in Bulgaria could be compared with the party in Austria. It’s hard to say which is better. :) No on other Euro Cup these parties like that. People are having fun, but Wildalpen is well known to Europeans. Yes, I need to emphasize: “…for us Europeans…”

Downriver start was divided into two groups of five teams. As the cold weather took its toll among the women’s teams, the “Rafting Ladies” and “Reflip” girls abandoned the race because of a sick team member or more. This does not mean that the race was not interesting though and nevertheless there was one flip.

The great battle between the teams in a very demanding course brings us the following results. Men’s: 1. “Respect”, 2. “Liman” and 3. “Reflip2”. There were penalties for “Respect” and “Liman” at the start. The only female team who paddled Downriver was “Adventure Net.” 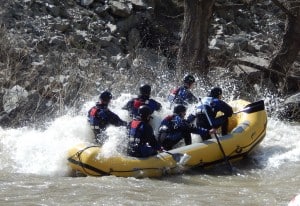 So it was after the fourth discipline the result looked like this:

Since all races have nicely finished, we have had a great time between races and the party on Wednesday evening with excellent hosts, “Banja”- hot pools in the mountains (for memory :) ). As usual, Bulgarian, kindly people have made this competition unforgettable.

Thank you to the organizers, the famous twins among the rafters; Emil and Emilia Begunova, for everything and for helping us to report to you. Thank you to all the sponsors. Congratulations to the winners and participants. Greetings to the judges and safety team.

I had the opportunity to see some old friends, meet some new and hope that one day my life again will take me on this event, because it is fantastic. We enjoyed it and you. If you missed this, do not miss it this following year. Struma River is a river that will not disappoint you, only be well prepared for her and her challenges. See you next year on Struma ;)