Ladies of the Ottawa

There have been a number of teams that have dominated their national champs for years and have been common sights at the WRC events. This year at the recent WRC in Brazil there were some new faces from Canada in the shape of the Ladies of the Ottawa River. 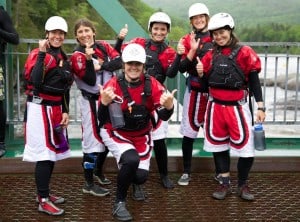 These girls attracted our attention and so we decided to ask Courtney Terraih to introduce us to her team mates.

Courtney, who are the girls that make this team and tell us something about them? –

“Thanks for asking, it would be my pleasure to introduce you and say something about them.

Karine Corriveau (coach), is a back left…certified as a kayak instructor and raft guide and has been working professionally on the river each summer since 2008. In addition to this, she represented Canada in the Pan American Championships in Brazil in 2010, returning with 5 medals …

Kailee Marland, is a front right… has paddled and rafted rivers in Alberta, Ontario, the United States, Mexico, Chile, and Costa Rica. Summers in Canada have been spent guiding and instructing in Alberta and on the Ottawa River. She hopes to continue guiding and paddling around the world for many more years.

Annick Laviolette, is a back right…a river guide for 12 years and now does a lot of multi day raft expeditions. She has never been to Itaipu, only to Mendoza in Argentina for Pan Ams. She has been rafting since 1997 and her favourites are slalom – for the fun of going through a course, and big water downriver – for the confrontation of a mass start and the adrenalin…

And me, Courtney Terriah, on the front left…spending my winter with 124 Alaskan huskies guiding sled trips on the frozen Takhini river. I fell in love with rafting on the Ottawa river, where I joined the Ladies of the Ottawa River in 2012. I plan to continue competing and growing the popularity of the sport…”

Wow, who would say that these girls are such adventurers. Fantastic. 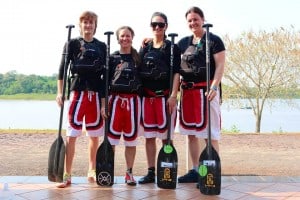 Courtney, tell us how your team started? –

“You could say the team truly began in about the year 2000, when Les Filles de la Rouge originated with Annick, and later Karine. They achieved widespread success paddling in different competitions, including two separate years at the Pan Ams, both times bringing 1st place gold medals home to Canada! In 2012 we branched off to create the Ladies of the Ottawa River, a young and dynamic team that quickly gained popularity and success by winning 1st place in the women’s raft division in the Animal Race on the Gauley River and second place overall at the Pan American competition in Jonquiere, Quebec. Since then the Ladies of the Ottawa River have competed in the Canadian R4 and R6 competitions as well as the R4 World Championship this year. Since 2012, the Ladies of the Ottawa River have always been a new collaboration of talented racers from past and present teams. We are very grateful to have such a powerful network of female paddlers to call on if someone becomes injured, cannot make it to a training session or cannot commit to travelling for a race. Leading up to this year’s World Championships, a series of unfortunate events including date changes, possible change in country of venue and serious injuries forced the team to doubt our availability for the race. Fortunately, our love for the competition is always the strongest force and we were able to put together a new R4 team to represent Canada just in time for our Brazilian visas to come in.” 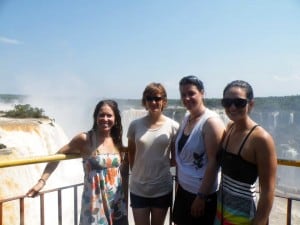 It’s great to hear that you have participated and won in the Animal Race on the Gauley River. We’ll talk about that experience some other time, because this is a story worthy of attention. As I can see it was not easy, but I’m glad that you managed to overcome all obstacles and reached Brazil.

How did you prepare for the WRC and on which rivers are you preparing? –

“Teams train all year to prepare for a competition like this. Once you have qualified for the race, you know that you and your team need to achieve an elite level of competence to be a real threat to others. This year our team met some challenges, with two of our original R4 racers suffering injuries that forced them to step back, and regrouping with team mates spread across the country. We practice slalom on a course in Valleyfield, Quebec, working on quick manoeuvring and overall finesse, and any time we are catching eddies! Throughout the year our team can be spotted paddling rivers ranging from the Canadian Arctic, the United States and New Zealand, as well as our home rivers the Ottawa and the Rouge. This is a lifestyle for us, and we are always conditioning ourselves, having fun while doing it!” – It sounds fantastic. Happiness is when your sport of rafting is part of your lifestyle.​

Your home rivers are certainly impressive and I sincerely hope that someday I paddle in Ottawa, one of the world’s most famous rivers for extreme ​paddling.​

Now tell me what were your impressions of Brazil? What discipline was the most challenging in the competition? –

“We felt very privileged to paddle in Brazilian water, and even more grateful for the success of the competition through a national drought. Being at the base of Iguaçu falls was unforgettable, the environment and wildlife were breath-taking. We were happy to see that the river had dropped since our earlier training session. This made the whitewater section larger and more dramatic, more appropriate for a downriver race and better suited to our team who guide on high volume rivers.

The most challenging discipline in the competition for us was the Slalom. Even though it is one of our favourite disciples, this year it was the subject of circumstance due to the drop in water level, and the schedule changes to accommodate it. We have limited resources to train for a slalom competition back home as we don’t have easy access to gates or the freedom to leave courses up. Limited practice really set us back this year.” – Certainly not a good thing and I hope that this will change before going to any other contest.

Getting to such an important competition doesn’t happen without the help of sponsors. Courtney, tell me something about the sponsors who have helped you to go to WRC R6 Brazil this year? –

“We would like to give a huge thank you to NRS​, Werner Paddles and Level 6 for sponsoring us with pro deals on gear and NRS​ for giving us our own raft to train on for the year. This support is hugely appreciated and allows us to represent Canada professionally in top of the line gear. We would also like to thank all of the staff and volunteers at the event!!”

For now I’m interested in whether we will see you in Indonesia next year in the R6 World Champs and what are your plans for the future? –

“I think we have a very bright future ahead of us, we show a lot of potential and a lot of heart. We plan to continue racing and getting involved in anything we can make it to and of course, striving towards representing Canada once again at the Worlds. Aside from racing we aspire to grow popularity in the sport. Raft Racing is still a very undiscovered sport in Canada and new teams have no resources to get started. It is important to us to spread news and stories about the competitions so that more Canadians will want to get involved and we will see a higher turnout in Canadian races.

Canada is still one of the only countries without a proper Federation. Some international competitors have access to paid coaches and many are paid to train and compete through the support of their national federation. Our underlying mission is to break the trail and match the international standard of raft racers. If we could establish a proper rafting federation in Canada, it could mean support for future teams and more opportunity to take part in this fun and competitive sport across Canada.

It is also a really great sport for women to get involved in. When you look at the results, the women are continually matching and even surpass scores in the Men’s division. It’s a healthy playing field and we would love to see more women getting involved!”

Well, you seem to have what it takes to get things done in the future and I like it that you are willing to work on the development of the sport. Canada is really blessed with some of the best rivers in the world and this advantage should be exploited. Also, Canadian rafters have shown great success in the world and we hope that the tradition is to be continued. An interesting team, and so much that I would still like to ask, but I will leave it for another time. It was a pleasure to get to know more about you. We will continue to follow your work and you continue to live your lifestyle.