The Euro Champs title in the R4 category remained in the hands of team TR Hiko of the Czech Rep. By winning this title they set two records at the Euro Champs 2012. Up until now, no team in this category has ever won the maximum of 1000 points and neither has any team managed to defend their title, so they are now carriers of these two records!! 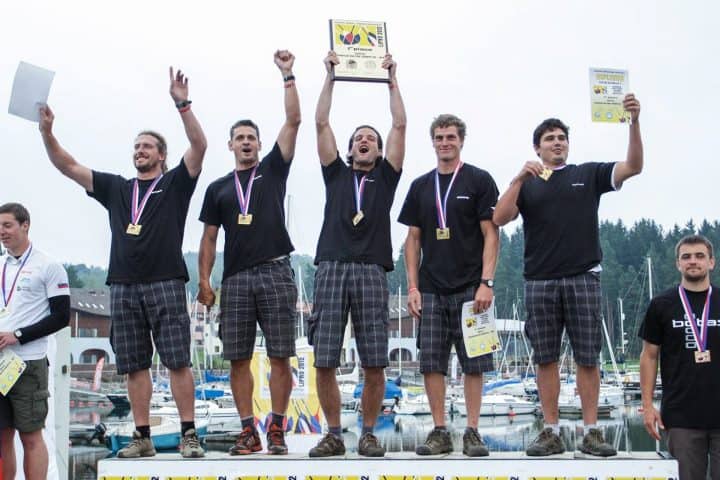 At the R4 WRC in Holland in 2010 they won gold in Slalom and third overall;  in Italy at the R4 Euro Champs in 2010 they won gold in Sprint and Overall plus silver in Slalom and Downriver. And they do not do too badly in R6 either! In this category they finished in third place overall at  Euro Champs 2012 with two gold medals in Sprint and, of course, Slalom. Fantastic for a team that only started in 2007.

We spoke with Ondrej’s Pinkava to find out where this great group of guys comes from:  “We all come from slalom or downriver boats. Jan Šťastný is a C1 and C2 paddler in downriver; I’m C1 in slalom and C2 in sprint downriver; Jan Havlíček C2; Aleš Daněk, Lukáš Uncajtík C1 & C2 in downriver – all these men were in the Czech national teams in slalom or downriver.” – explains Ondřej. Do you think that is the reason why you’re so good at rafting, especially in slalom? – “I think yes. But GER 2 R4 have Sideris Tasiadis, one of the best C1 paddlers in the world and they got not medals. “– he says. Maybe if the event had been on the artificial course in Augsburg it would have been different? In the end though, similar sports may give you a good basis, but the most important thing is to ensure the people in the raft can paddle as one.

They love racing – to compete with other rafters according to the rules. But they love the other side of competition as well, specifically what a big one like the Euro Champs can offer: meeting friends, speaking with them and drinking beer together!

On the Sprint, Slalom and H2H course, which was already proven as fantastic at WRC 2003, they paddled like they had known it their entire life. The difference between them and the others was obvious. “In Sprint – 1,5sec – this is a big difference between us and the second boat.” -say Ondrej. This was a solid announcement of their superiority. 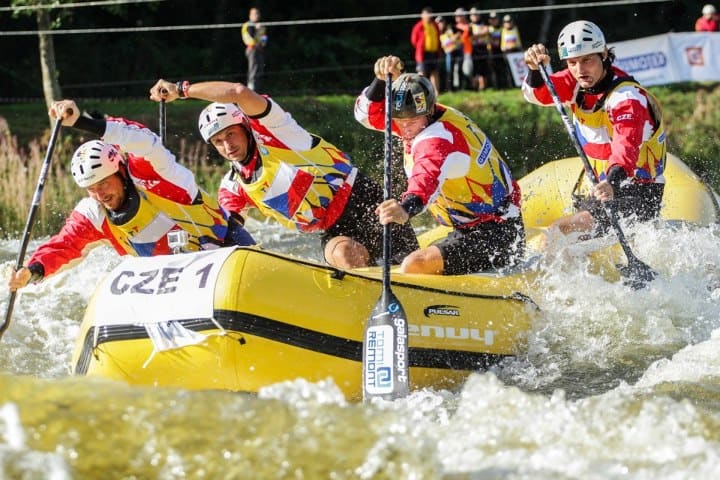 It seemed in the  H2H that those in the right lane seemed to have a much better chance and often were the ones who first  got onto the racing line which made it hard to be overtaken by the end. Would you agree? “H2H – first we chose the left position and won, then the right and won again. I think in the H2H it is a really bad system of elimination. In R4 it was easy to get to the final as all the good teams were eliminated in the second round.“

When their turn came for slalom we could see that the water was flowing really strongly. Some teams were getting out of their raft and onto the shore to push the raft back upstream when they overshot a gate.  TR Hiko and two other teams were the only ones who paddled the slalom course without any penalties, and they were  fastest, +11,69 faster than second place. – “Slalom was hard because the water was strong” – confirms Ondrej, saying that “The slalom track was built really nicely and cleverly.“ – Yes, it seems to me pretty fair for all.

With gold in Downriver, +21.07 faster than the second placed team, they had five gold medals in their pockets! By the end of the competition they had brought  medals and records to their country, but what is it they expect from the future?

For this team these wishes are quite possible! So good luck guys.