The IRF 2014 R4 World Rafting Championships has moved into its second phase now which is the Open and Masters divisions. 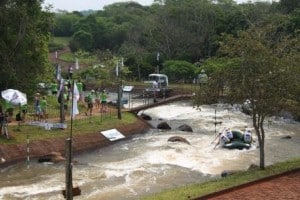 The past two days the teams had a chance to paddle on the Itaipu Canal where they familiarized themselves with the Sprint, H2H and Slalom track. The second day of training the water was dropping in level rapidly and they could not practice slalom due to the fact that they gates were hanging too high out of the water. So they will get a chance to practice Slalom after the Sprint tomorrow. 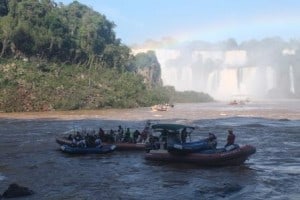 Today the teams had their minds blown by the spectacular trip up the Iguassu River to the base of the falls where the Downriver will start. The river has dropped about 3 metres since the Juniors raced on Sunday which is quite a change! Due to the downriver distance being short and the fact that the fastest Junior team did it in about 13 minutes the race organisers have added some buoys along the way to add extra challenges and paddling time to get it closer to 20 minutes at least.

Due to the drought in this region of Brazil over the last 3 years the massive dam above the canal is at an unexpected low level. Although the Iguassu River has an enormous amount of water that flows into it the majority of it flows out through the turbines of the hydroelectric scheme. So the water level in the dam dropped 10 cm yesterday which is incredible considering the dam is 200km long! To resolve this water issue Binacional, one of the sponsors of the event and the owners of the Itaipu Canal and hydroelectric plant, have organised pumps to be put in to pump the water over the dam wall and into the canal. This is part of a long term plan as Itaipu Canal is also the location for the national team’s slalom training for the Olympics.

It is hot and sweaty with temperatures reaching up to 40 degrees, this makes it quite a challenge for the teams as they must ensure they carefully manage liquid intake and the heat sapping their strength.