You are here: Home1 / Sustainability2 / Top 10 most threatened rivers

The International Rafting Federation maintains a ‘Top 10 Most Threatened Rivers’ list. The list includes rafting rivers  which are considered by the IRF to be the most endangered or threatened by damming or diversion, mining,  fracking, pollution,  and other constant development threats that loom over rivers worldwide. These types of projects diminish water quality, impede vital fish runs, destroy natural habitat for flora and fauna, and often put an end to recreational and commercial rafting opportunities and non-destructive sustainable tourism opportunities.

You can also read about the TOP 10 MOST IMPROVED RIVERS. 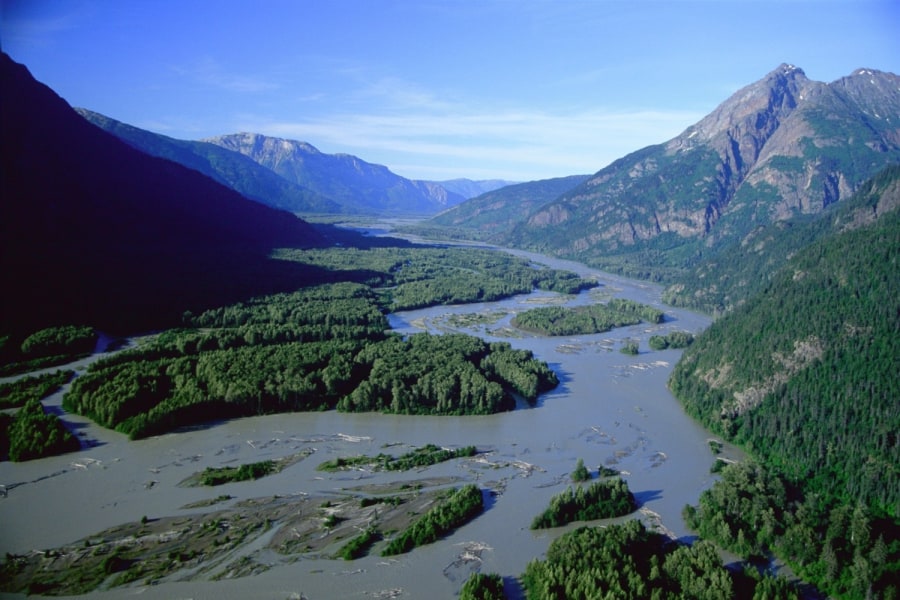 Threatened by: Susitna-Watana Hydroelectric Project. The second tallest dam in America has been proposed in the heart of a treasured Alaskan wilderness. It’s a bad idea. Among the many negative impacts of damming the Susitna River would be: 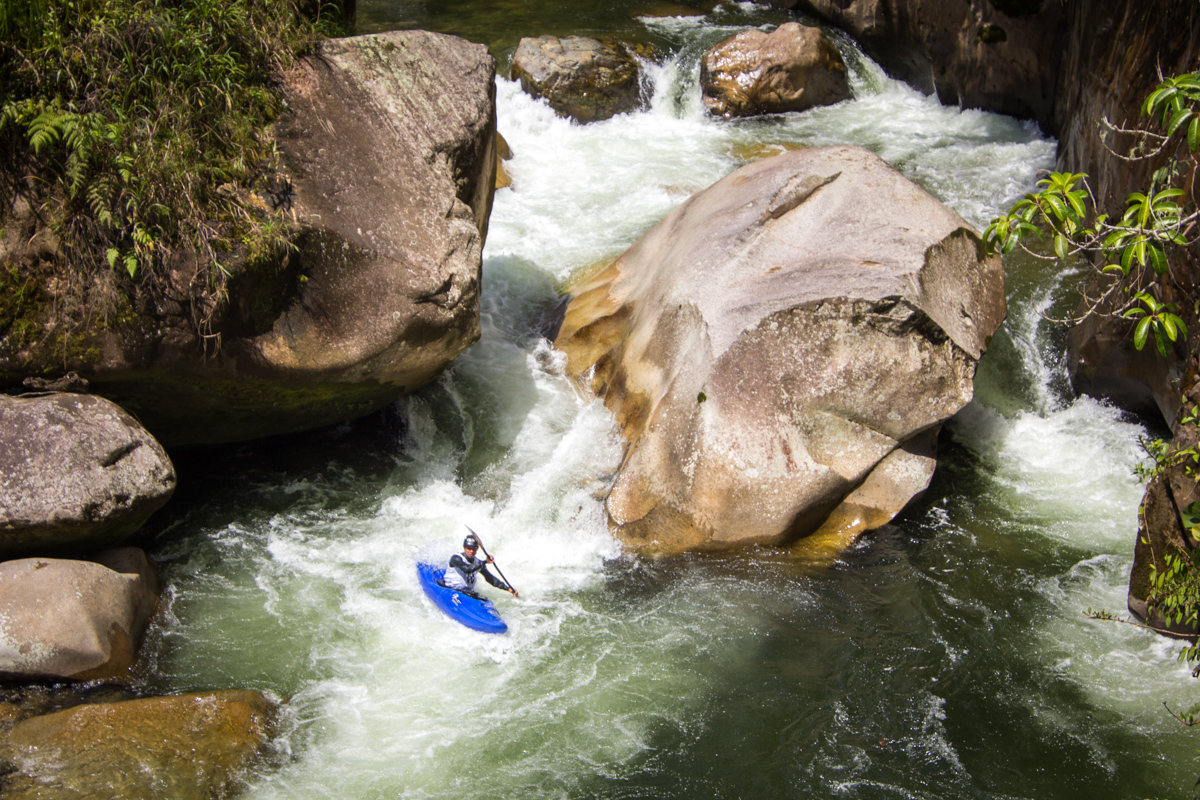 The Upper Jondachi boasts Class V paddling for whitewater enthusiasts while the Middle Jondachi is a solid Class IV runs that is often used as a training ground for the upper section. The Class III-IV Lower Jondachi-Hollin is one of the most popular one-day rafting trips in Ecuador, bringing more than 1,500 paddlers to the area annually. Set in the tropical jungles of Ecuador, with gorgeous granite boulder gardens and pool drops, this river runs through areas rich in biodiversity and culture. The Jondachi Fest, a kayaking competition set to take place in January 2015, will bring awareness to the Jondachi and the danger it faces with the proposed hydroelectric project.

Most of the legendary Upper Jondachi River with world-class rapids between the diversion dam and the powerhouse would be effectively de-watered and eliminated as a paddling destination, and an important free-flowing river corridor which provides ecological connectivity between a critical transition zone between the Andes and the Amazon, would be permanently interrupted. 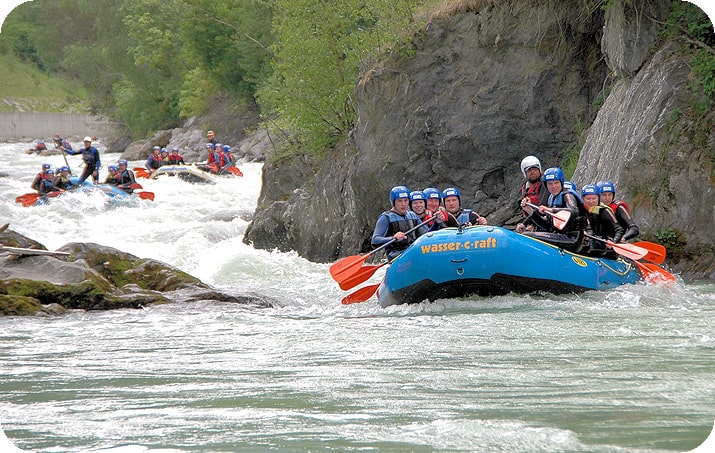 Sanna is a river in Austria formed near Tobadill by the confluence of the rivers Rosanna (35 km, from Arlberg and Stanzertalvalley) and Trisanna (35 km, from Silvretta and Paznaun). The tributary to the Inn River is only 8 kilometres (5.0 mi) long and considered one of the shortest rivers in Europe, with the places Pians, Grins and Landeck situated at its waterfront. The whitewater river is used for kayaking and was the site of the 1996 world championships.

Threatened by: There is currently a plan being executed to build a hydro electric dam at the source of the river Sanna, Landeck Austria. The project plans to remove practically ALL of the water from its very source and return it back to the river Inn completely diverting the water form the entire rivers length. The developers plan to only leave 3 cubic metres of “rest” water in the river – this equates to reducing this mighty river to a ditch 3-4 metres wide. The project is planned to be completed in 2019. This project is purely designed for the commercial gain of the developers and a handful of wealthy investors. Please sign up if you care for our environment and want to help prevent the developers taking the water away from the people.

There are few places in the world that remain truly wild. The Sacred Headwaters of the Skeena, Stikine and the Nass are one of these such places. The crystal clear Skeena runs undammed its entire length—360 miles from source to sea—offering big Class IV boating on the upper section, and wilderness Class II scenic floats further down. The Skeena is known for its rugged wilderness, where often you will see grizzly bears, eagles, and salmon.

The impacts from proposed pipelines would add to numerous stressors on salmon ecosystems — some existing and some expected in the future. These include forestry, hydro developments and climate change. Within northern B.C., current and historic land-use practices have detrimentally affected salmon habitats. There have been widespread environmental impacts that will likely persist into the future

The Zambezi, known as one of the best whitewater runs in the world, is synonymous with big water, and high-adventure rafting. Set in a deep, narrow gorge at the base of spectacular Victoria Falls, the river offers adrenaline-inducing, Class V rapids, spectacular views and great beaches.  It’s expected that the proposed Batoka Gorge Dam will flood the upper Zambezi and likely discontinue rafting on most of the river, if not its entirety, within ten years.

According to the available project information, the Batoka hydropower project will have a 181-meter-high dam wall that will hold back 1,680 million cubic meters of water, covering an area of approximately 26 square kilometers. The reservoir will be long and narrow, stretching to just about 1km from the plunge pool of the Victoria Falls.This project is estimated to cost US$4 billion and will take 10-13 years to complete. The preferred option being advanced is the Build-Own-Operate-Transfer (BOT) approach, involving private sector developers. Both the World Bank and the African Development Bank have expressed interest in funding the project, although there is no formalized commitment at the time of this writing. 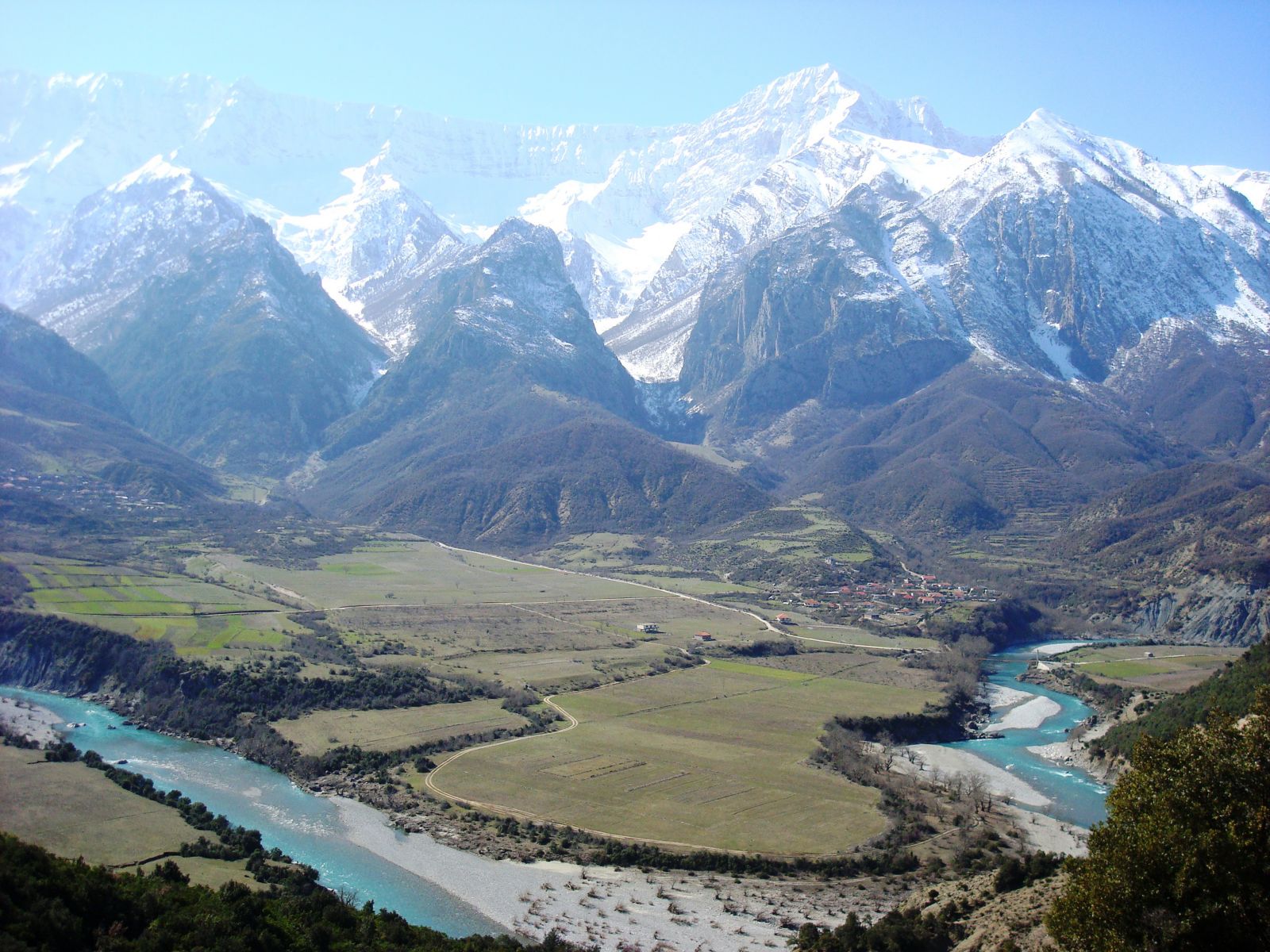 The Vjosa River in Albania is one of Europe’s last living wild rivers. Along its entire course of over 270 kilometers it is untamed and free flowing and characterized by beautiful canyons, braided river sections, islands, oxbows and meandering stretches. The Vjosa is draining a total area of 6,700 km² in Albania and Greece and discharges an average of 204 m³/s into the Adriatic Sea.

Threatened by:  The biggest threat for rivers is hydropower. More than 100 new hydropower dams are to be built in all of Albania. Along the Albanian river section of the Vjosa, the Ministry of Energy intends to build eight dams. In the upper part, the Greek government is planning a dam project with the aim to divert about 70 million cubic meters per year through the River Kalamas for irrigation purposes. 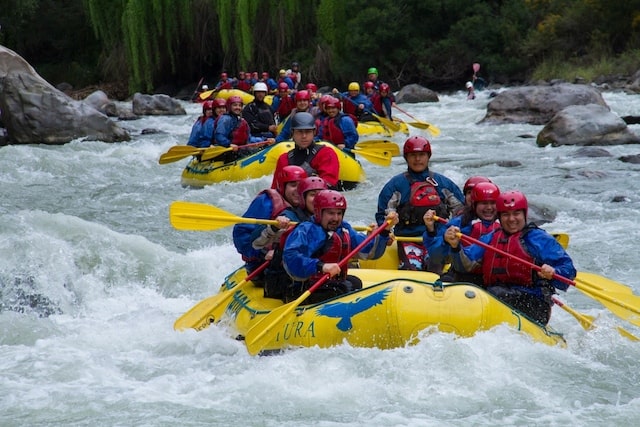 The Rio Maipo (Maipo River) is the principal waterway flowing through the metropolitan region of Santiago de Chile. The glaciated slopes of the Maipo Volcano serve as the headwaters of the Rio Maipo high in the Andes. Principle tributaries of the Rio Maipo include, the Rio Yeso, Rio Volcan, Rio Colorado and the Rio Mapocho. The Upper Maipo is rafted year round with different sections of the river ranging from Grade III to Grade V in difficulty at different water levels / seasons. The Rio Yeso and Rio Colorado are also well known streams for local kayakers with many Grade IV-V stretches of whitewater. During the spring and summer during high flows, the Rio Maipo is a silty river, carrying glacial till down from the Andes as it carves its way through many canyons on its way to the sea but changes to a clear green color during the fall and winter months.  Despite its brown hue, the water of the Rio Maipo is very clean and is the most popular rafting and kayaking river in central Chile, visited by thousands of river enthusiasts each year.  The Maipo is also responsible for providing over 70% of the drinking water for the Metropolitan Santiago area.

The Alto Maipo project is jointly owned by AES GENER, a USA based multi-national energy corporation (60%), and the Luskic family , a wealthy Chilean family (40%) that has financial interests in dozens of projects and businesses in Chile.  The primary purpose of the project will be to provide a cheap source of energy for powering and expanding the Pelambres Mine, a copper mine owned by the Luksic family.  Falsely described as a ‘run of the river project’ PHAM will divert all of the upper tributaries of the Maipo into a 70 kilometer tunnel effectively draining the entire Upper Maipo watershed.

Environmental and human impact will be the loss of the local tourist industry, extreme risk to the drinking water supply of over 7 million residents, increased risk of wildfires, loss of riparian landscape/aesthetic degradation, destruction of the fragile Valle de las Arenas, deforestation and loss of vegetation cover, habitat loss for endangered flora and fauna, among others. 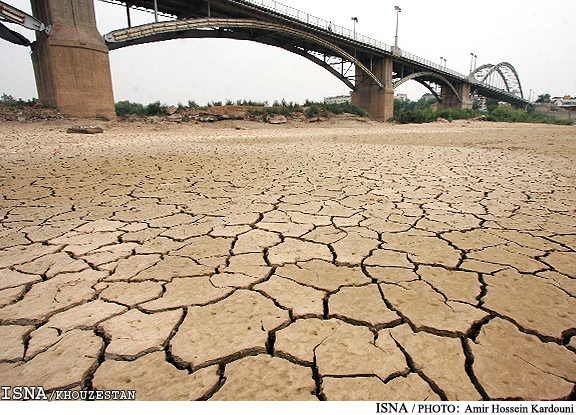 The Karun was Iran’s largest and most effluent, and the only navigable, river. It was about 450 miles (720 km) long. It rises in the Zard Kuh (Yellow mountain) of the Zagros Range, receiving many tributaries, such as the Dez and the Kuhrang, before passing through the capital of Khuzestan Province, the city of Ahwaz.

Threatened by: Environmental Disaster. Now, Karun is another victim of the Mullah regime and their dreadful stupid plans. In the recent years, the Mullah construction of new stupid dams on the Karun, totally destroyed this great river, its basin, and its ecology. 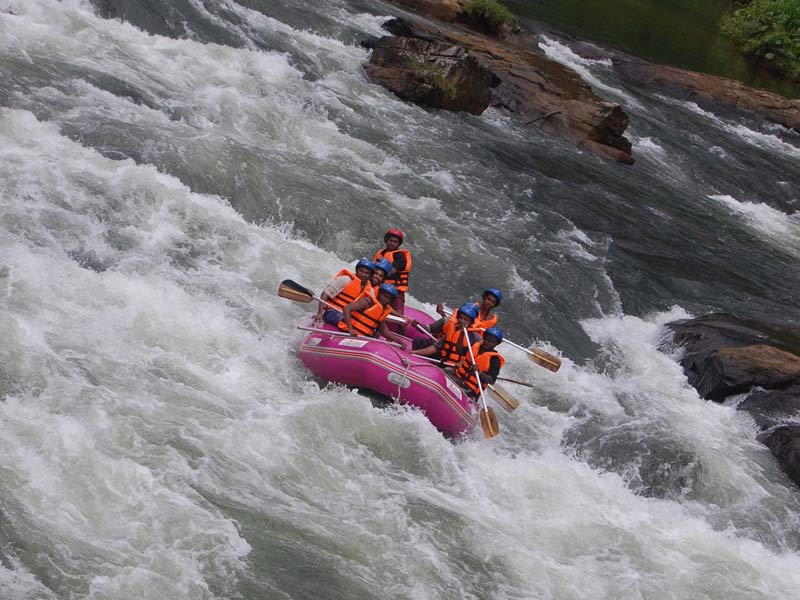 The Kelani River is a 145-kilometre-long river in Sri Lanka. Ranking as the fourth longest river in the country, it stretches from the Sri Pada Mountain Range to Colombo. It flows through or bordering the Sri Lankan districts of Nuwara Eliya, Ratnapura, Kegalle, Gampaha and Colombo.

Threatened by: A construction that is threatening to sink White Water Rafting and Kitulgala’s beauty. Construction has already commenced for a proposed hydro power plant in Sri Lanka damming the Kelani River in Polpitiya, not very far from the tourism hot spot of Kithulgala. The proposed power plant is named as “The Broadlands Power Plant”.

The Congo River is the world’s second largest in terms of flow (42,000 m3/s), after the Amazon, and the second longest river in Africa (4,700 km), after the Nile River. It empties into the equatorial Atlantic Ocean creating what is famously known as the Congo Plume. The plume is a high-productivity area arising from the rich nutrient flow from the river and is detected as far as 800 km offshore. The plume accounts for 40-80% of total carbon productivity and is one of the largest carbon sinks in the world.

Grand Inga, the world’s largest hydropower scheme, is proposed for the Congo River in the Democratic Republic of Congo (DRC), one of Africa’s most politically volatile and corruption-plagued countries. The massive dam is part of a greater vision by the international economic community to develop a power grid across Africa that will spur the continent’s industrial economic development.

Continue to read about TOP 10 MOST IMPROVED RIVERS.