A crew from Manitoba and Ontario that came together on the Ottawa River, in Foresters Falls Ontario, will represent Canada at the 20 13 World Rafting Champs in New Zealand in November. The “Magnificent Seven” are: Gwyn Ashcroft, Graham Ball, Jon Booren, Andy Hill, Bill Leslie, Lars Romeskie and Tim Wintoniw. 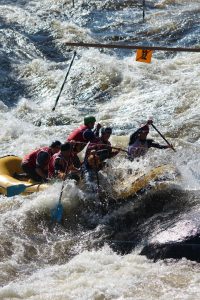 Most of the members have been working as raft guides for at least 6 years; with the rest for more than double that. But what is interesting about them is that New Zealand is not unknown to them, as is explained in this interview with Jon:

-“We’re very excited about representing our country at the world championships in 2013. A number of us have worked as raft guides in New Zealand in the past (and present), so in a way it’s like a small homecoming for those of us who haven’t been to NZ in a number of years. We’re eager to catch up with old friends, make new ones and enjoy the tremendous NZ hospitality”

Do you see an advantage in the fact that you have already been on the rivers of New Zealand, or perhaps even those on which the competition is being held?

-“Any time someone has been on a river, paddling it again becomes slightly easier. However, we do not think our team is going to have a great advantage over the others for the competition. There will be some really talented teams and we’re simply looking to compete with them. Though, we still have a small hope that there might be a change in water release plans and a flood level Tongariro River might be used for the downriver.” 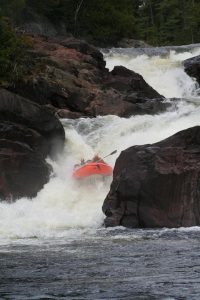 -“We paddle on two rivers for training: The Petawawa and the Ottawa. They are both pool drop class 3/4 for most of the season, but in spring or at times of flood, they have class 5 rapids. If people have an opportunity to see them in high flows, that’s where they really shine.” It’s certainly beautiful to see and experience.

Paddling is a passion for them, true lovers of white water; but besides individual paddling, rafting brings different kinds of fun. Jon explains what:

-“On our home river, the volume of water produces massive features and ample opportunity to flip the boat. When you come through a rapid (upside down or right side up), you’re with a bunch of people who are having just as much fun as you.”

You recently had a contest, 2012 Pan-American Champs / Canada World Cup, where you won third place in the Slalom. This Slalom course was apparently really difficult and challenging (hard cross river gates, hard upstream gates, lots of “50”s). Jon, tell us something about your success and the slalom course.

-“The slalom course at the Pan-American was really challenging. The course designers did a great job putting gates in tough spots given the amount of water they were able to secure with the release. Our team really enjoys slalom, as it requires a number of skills to do well. We have a lot of fun running gates, which probably contributed to our result. We were happy to medal, but 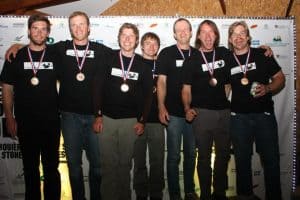 recognize that many other teams could have been in our place. A few teams had paddles fail on them and they were expected to do well. If anything one of the greatest pleasures from the competition was watching the other national teams show us their abilities. We have a new idea of where we would like our slalom abilities to be in 2013.” Surely this competition gave them impetus and insight into where they are in relation to other clubs and what else can be improved leading up to WRC13.

And for the end Jon, can you briefly introduce us to rafting in Canada?

-“There are a number of other teams in Canada, primarily based in Quebec. We would really like to see the sport grow in Canada, our hope is to host a championship and have participation from teams from across the country. There have been Canadian Championships for the past decade (or more). Our club recently won the R4 championships in 2011 and now the R6 in 2012. It’s such a great activity that I hope more people get into it. It keeps you fit and really gives you a great appreciation for our countries great rivers, their natural beauty and ecological importance.”

Those who attended the Pan Am / World Cup event in September are all in agreement – a great place to raft, race and have fun.